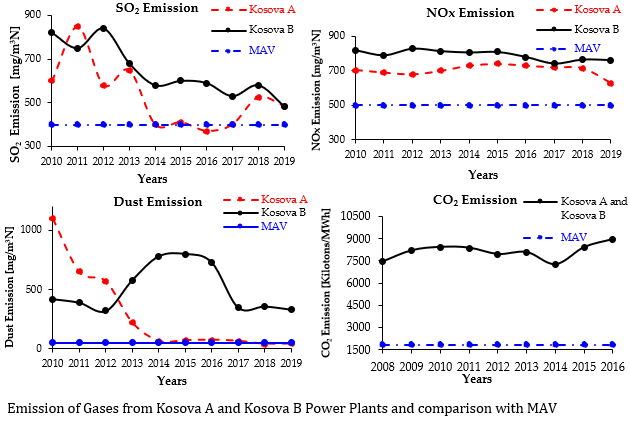 Urban wind Energy is one of the new renewable ways of producing electricity, which researchers have not studied very much. From earlier studies, it is impossible to state if it is or is not recommended to install wind turbines in Urban Areas. Further inverstigation are required to have a more accurate answer, including wind potential, suitability and possibility of installation. On the rooftop of the Technical Faculties Laboratory of the University of Prishtina “HASAN PRISHTINA", a Horizontal Axis Wind Turbine and a Vertical Axis Wind Turbine have been installed. Both turbines are with the same capacity of 300 watts. A small meteorological station is installed among wind turbines to provide meteorological data. Results from installing these devices are presented in this research, where the turbines' power production potential is presented. The energy situation in Kosovo is presented, well as the pollution caused from the old fashion power plants. Research also includes the comparision between theoretical and real power production from each turbine separately. The wind data and power production results for both turbines are presented for two years, 2019 and 2020. The more suitable turbine is chosen by comparing the results, after which its main characteristics are shown at the end of the study.

Currently, Kosovo produces more than 95% of the power requirements from two coal-based power plants, Kosova A and Kosova B (Rizvanolli, 2019). Units A3, A4, and A5, of Kosovo are still working, while units A1 and A2 are not operating. Three working units of Kosova A produce around 610 MW of energy with a total annual production of 1500 GWh/year.

Kosova B consists of two units: Unit B1 and B2. Both units have an installed capacity of 339 MW each (KEC, 2021). Unit B1 of Kosova B was established and began working in 1983 while Unit B2 began working 1984. The total annual production of Kosova B Power Plant is around 3750 GWh/year (KEC, 2021). Old technology used and the years of work have depreciated the power plant and have made them the biggest pollutants to the environment in the area of Kosovo. The pollution of the environment from these Power Plants includes pollution with dust, SOx, NOx, and other pollutants (Spanca, 2020).
The replacement of fossil fuel power plants with renewable energy sources is one of the ways of covering energy needs without harming the environment. According to studies done and renewable power plants that operate in Kosovo, there are possibilities to use different renewable sources in different regions.  Kosovo’s Energy Regulatory Office (ERO) is established as an independent body and has the duty to regulate activities in the energy sector. According to ERO, there is a number of Power Plants that produce electricity using different Renewable Sources (ERO, 2020). Wind Energy produces the highest amount of electricity, followed by Hydro Power Plants and Photovoltaic systems (ERO, 2020).
A meteorological station and two wind turbines have been installed on the rooftop of the Technical Faculties Laboratory of the University of Prishtina "HASAN PRISHTINA" for the purposes of this study. While wind turbines produce electricity for the laboratory needs, the meteorological station provides wind data needed for the paper analysis purposes. All the results achieved from wind turbines and meteorological stations are presented in either table form or graphical form.
Because of the obstacles around the spot where devices are installed, wind velocity doesn't show very satisfying results, and neither does the power production.  Results show that Horizontal Axis wind turbine (HAWT) gives better performance than a vertical Axis wind turbine (VAWT) for the chosen spot and the circumstances where devices are installed.  HAWT power curve and power coefficient are presented graphically in the end of the paper, fulfilling the requests set at the beginning of this research.
Besides the Introduction, the paper is separated into six sections. Section 2 presents Kosovo's energy and environment situation, section 3 presents the literature review, section 4 shows the calculations of the wind turbines power production, section 5 presents the results gained from research and section 6 gives the conclusion and discussion of the results.

A considerable number of studies have been conducted in the field of Urban wind technology. First, in 1998, the European Community implemented a project called Wind Energy for the Built Environment (WEB), which analyses the possibility of installing small wind turbines in urban areas (Campbell et al., 2001). This project also developed a model of wind turbine technology for application in urban areas, which was called Urban Wind Energy Conversion Systems (UWECS) (Stankovic et al., 2009). Urban wind energy technology, the feasibility of building-mounted/integrated wind turbines, and the impact of installing wind turbines on reducing carbon dioxide emissions were part of the study conducted in 2003 and 2004 in the UK (Dutton et al., 2005). The EU implemented a similar project in 2007 in three different countries: France, the Netherlands and, the UK. This study aimed at the results that come from the installation of wind turbines in urban areas, installing them in different areas of these states, and regulating the relevant legislation for the installation of wind turbines in residential areas (WINEUR, 2005). A general study on the installation of wind turbines in the built environment was done in France in 2004, where 60 wind turbines were installed in the built environment by the Regional Environment and New Energy Agency (ARENE) (Grignoux et al., 2004). Except the built environment, some studies were done in laboratories, like wind tunnels (Ramdlan et al., 2016). In 2011, Christine Beller from Danish Technical University focused her thesis on urban wind energy, comparing power production results from three different wind turbines installed at the Ørsted institute rooftop (Beller, 2011). The study focused on the design of the blades of the turbine and the obstacles around the place where turbines were installed.

A number of researches on the possibility of incorporating wind energy in residential areas have also been carried out. In the beginning, studies were done more in the light of energy potential, field tests, blade designs, and the likes (Cho et al., 2011). These turbines were designed more for commercial purposes. The geometry of the buildings also plays a crucial role in Urban Wind Energy (Darvish et al., 2020). The connection between urban wind technology, environment, technological innovation, and sustainability is also very important when dealing with urban setting (Yusuf et al., 2018). The first deep academic study about Urban Wind Technology was done in the Netherlands at Delft Technical University in 2006. This study was conducted by Mertens, whereas a part of the study, he developed a turbine that operates especially in urban areas. The developed turbine was called TURBY, and its design was focused on tilted air flowing conditions on the rooftops. The impact of the turbine position on the roof was also studied as a part of the investigation (Bussel et al., 2004).

Later research has been carried out mainly in the United Kingdom. In 2007 in Leicestershire at Loughborough University, a study was done indicating Building-Mounted Ducted Wind Turbine (Watson et al., 2007). The performance of vertical axis wind turbines with curvature blades and helical blades was studied in 2010 at the University of Glasgow (Scheurich et al., 2010). Later that year, the University of Cambridge published a study investigating Energy Capture Through Gust-Tracking (Bertényi et al., 2012). In 2013 a study on Sizing and Simulation of PV-Wind Hybrid Power System was done at Solar Energy Institute Building at Ege University 2012. The study was focused on determining the potential wind and solar potential for the location where the building is positioned (Engin, 2013). More recently, researches have been done to compare the efficiency of varying wind turbines in various places in the built environment. Such a study was done in Massachusetts at Clark University in Worcester in 2017, comparing Horizontal and Vertical Axis Wind Turbines (Winslow, 2017). The study shows that HAWT produced more energy overall, with VAWT being more efficient on several low and moderate wind velocity days. Both turbines' power coefficient was very similar, with HAWT's average power coefficient of only 0.01 higher than VAWT.

More recently, the improvement in controlling small wind turbines in transition regions was studied in a journal article in 2020 (Ruz et al., 2020). Later at the beginning of 2021, a study was conducted on small wind turbines with Injection Molded Blades. This research was proven numerically and experimentally (Kim et al., 2021).

This paper investigates wind potential for one part of the urban area of Prishtina by showing the power production of two installed wind turbines: Horizontal and Vertical Axis wind turbines. Both turbines were performing for two years, throughout 2019 and 2020. Results show that installing wind turbines in this area is recommended in certain conditions. The spot which is chosen for this research has many obstacles around it. So, the wind velocity in this spot is hampered by the objects around the spot. Installation of wind turbines in this area requires studies if obstacles hamper the wind in the height where wind turbines will be placed. HAWT produced 189.01 kWh on 2019 and 213.87 kWh on 2020, thus giving better results than VAWT, which produced 61.5 kWh on 2019, and 55.63 kWh on 2020. Part of the study was also the comparison of theoretical and real wind turbines data. The real and theoretical data of the wind turbine are close to each other, with real data being slightly lower than theoretical, a result that was expected. Afterward, the characteristics of the turbine, in this case, the HAWT, are presented graphically, where the power curve and power coefficient are presented. The higher power coefficient registered is 34.3% at the wind velocity of 4.5 m/s, while the highest registered power produced is registered in March, where 263.9 W were produced at the wind velocity of 13.5 m/s. The combination of wind and solar energy in electricity production for this area remains to be studied in the future.

Bussel, G. V., Mertens, S., Polinder, H., Sidler, H.F.A., 2004. TURBY, Concept and Realisation of a Small VAWT for the Built Environment. In: The Science of Making Torque from Wind.