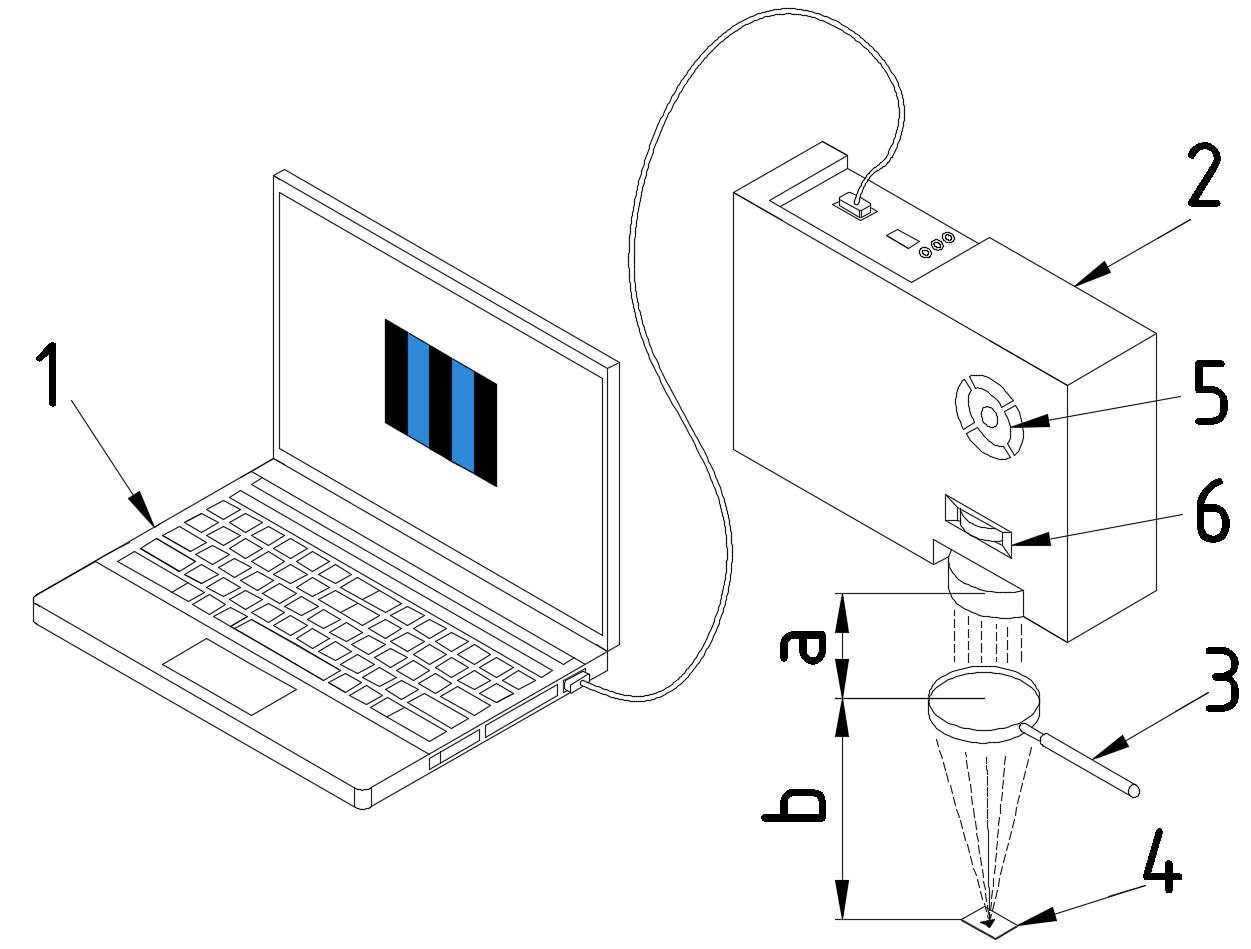 This paper offers an alternative method of making PCB routing using a negative dry film photoresist and a maskless photolithography method. The objective of this research is determining the correct parameters for the process of making PCB design easier, cheaper and safer. Electronic circuit design was created on a laptop or PC using Autodesk EAGLE software with a combination of result is black and blue light color. PCB routing design was inserted into a PowerPoint slide to display on a commercial Digital Light Processing (DLP) projector. No modifications were made to projector, which was mounted directly on a stand with a downward facing position. The projector lamp replaced an ultraviolet or X-ray source during the exposure process, exposing PCB coated in negative dry film photoresist. After the exposure process, the PCB was inserted into developer solution, causing the blue light irradiated part to remain while the blackened sections dissolved. The PCB was then added to an etching solution to scrape the copper unprotected by the photoresist. The PCB was finally soaked in a remover solution to remove the photoresist. Once complete, the process generated a laptop-designed PCB routing. Electrical lines can be created using this method with a size of 100 µm and a lane edge deviation of 5 µm. The goal of research to make PCB routing cheaper, easier and safer was achieved. Evidenced by the installation of electronic components and then tested, the results are all components function well.

The manufacture of PCB routing can be performed manually. That is, drawing electrical paths directly on a PCB using a permanent marker, and then placing the board into an etchant solution. The advantages of such methods are its ease and inexpensive nature, but it cannot be used to create identical profiles in large quantities, and the resulting lines are significantly rough. In the transfer method (mold removal), PCB paper is printed with a laser printer then ironed onto a PCB, transferring the electric line profile to the board before being inserted into enchanting solution. The transfer method can make identical paths and more complicated profile shapes than the manual process. However, its disadvantages include broken lines that must be connected with permanent marker and PCB line size that remains significantly rough.

PCB  laser  printer  technology  can  erode  a  PCB with a  laser  beam  (Triano & Collins, 2013; Alwaidh et al., 2014), which allows complicated and smooth profiles to be generated. Yet, such work takes a long time, requires expensive machines and tools, and is inherently dangerous due to laser beam utilization. A PCB milling method mechanically scrapes the PCB (Seo et al., 2011; B?aez et al., 2012) to create complicated profiles with matching repetitive quality. The disadvantage of the milling method is that the pattern is rough, takes a long time, is expensive, the tool breaks easily.

The most widely used, and still developing, method is lithography, which is distinguished by its use of light sources. Specifically, ultraviolet (UV) lithography (Bertsch et al., 1999; Hirai et al., 2006) uses UV rays to produce micro profiles and X-ray lithography (Romanato et al., 2004; Nazmov, 2015; Zhao et al., 2017) uses X-ray beams capable of producing nanoscale profiles. Although lithography can provide high-quality products quickly, it is significantly expensive and dangerous. Of the several existing methods, each with its own challenges in PCB routing creation, there is not yet a method capable of producing complicated paths with small and smooth profiles at a low cost while maintaining easy and safe manufacture.

Some method improvements have been made by replacing UV light and X-rays with visible projector light and maskless lithography method (Rajan et al., 2013). The exposure process described by Rajan et al. (2013) was sourced from a DLP projector. However, the projector required modification and an added stereo microscope, making it less than straightforward and preventing this method from being applied to copper or a PCB.

Modifying maskless lithography with Digital Mirror Device (DMD), the use of mercury lamp light has been performed successfully (Zhong et al., 2014). The modifications produced maskless real-time results with no alignment errors as well as time and cost savings. Despite this, the method is not simple and rendering it not yet inapplicable to copper or PCB.

The maskless photolithography method was then modified further by using an unmodified commercial DLP projector (Suwandi et al., 2014), and was successfully applied to copper by using bacteria Acidithiobacillus ferrooxidans NBRC 14262 as a scraper (a form of biomachining). This process produced a path profile with the smallest size of 180 ?m and 26 ?m deviations. The weakness of the method was that the erosion process took a long time (2-3 day). A DLP projector was also used in a seedless-electroplating process with maskless lithography replacing the Lithographie, Galvanoformung, Abformung (LIGA) process (Whulanza et al., 2015), and this process successfully deposited nickel onto a silicon wafer.

This paper will attempt to improve the visible light maskless photolithography method by replacing a negative tone photoresist with a negative dry film photoresist. This replacement will eliminate some processes, such as pre-baking and spin coating, making the process more straightforward. Then, the copper etching process before using bacteria was replaced with liquid etching so that it was faster.