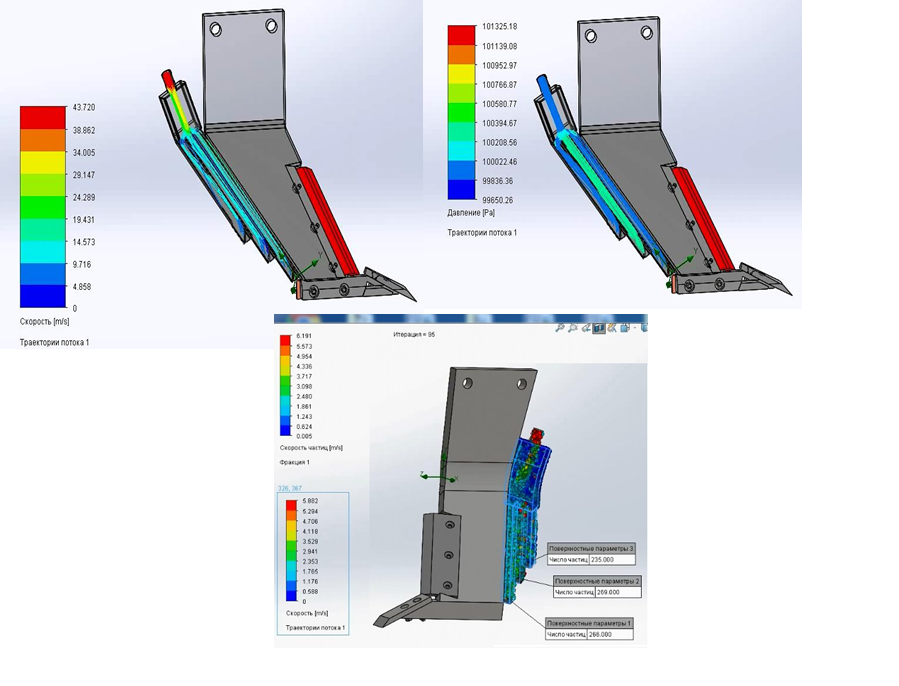 An original technical solution is proposed that permits the application of a main fertilizer dose once in 4-5 years at a depth of 6-25 cm with an inclined belt. The work aims to investigate the interaction between the proposed working tool (ripper-distributor) of the developed chisel-fertilizer with the soil, and to determine dependences that link its traction force with the design parameters. Studying the soil deformation pattern under the influence of working tool cutting parts based on classical mechanics made it possible to determine the dependence between the tractive force of the ripper-distributor and its design parameters. 3D modeling and C.F.D. analysis by using SolidWorks Flow Simulation® made it possible to define the fertilizer distributor parameters of the working body and flow characteristics of fertilizers. The distribution quality studies of fertilizer granules in compartments of the working tool distributor showed that the non-uniformity of distribution at different dosages (from 50 to 400 kg/ha) ranges from 7.8% for the application of granulated superphosphate up to 22.7% for the application of powdered superphosphate. The chisel-fertilizer enables soil-friendly and sloping site-specific fertilizer application at a depth from 5.6-9.8, 16-18, 23-25.8 cm, and a fertilizer distribution non-uniformity of 14-15% over the width of the spreader.

One way to adapt to climate change in the agricultural sector is by modifying the cropping system (Abella, Lansigan, and Tubay, 2021) at all technological processes. The most important of them is the application of fertilizers, and they should be provided in an environmentally friendly way. In addition, combining several technological operations in one farm unit passage (reducing the number of technological operations) decreases the risk of soil erosion (Gunawan, Sutjiningsih, and Soeryantono, 2013).

Minimum and no-till cultivation technologies do not provide for the local application of higher doses of granular and liquid mineral fertilizers in the soil.

This leads to soil compaction, decreased soil fertility, and changes in layer soil structure from 0 to 30 cm (Pires et al., 2017; Gao et al., 2017). Research shows that an important factor for sustainable yields is optimal soil density. An increase of 0.1-0.3 g/cm3 can reduce crop yields by 20–40% (Silva et al., 2021; Ferreira et al., 2020; Zarehaghi et al., 2017; Nosalewicz and Lipiec, 2014). Without the extended reproduction of soil fertility, it is impossible to ensure progressive yield growth (Campolo et al., 2021; Dai et al., 2021; Imran, Amanullah, and M. Al-Tawaha, 2021). The analysis of long-term cropping practices in Kazakhstan and other countries shows that soils cultivated without the use of fertilizers, consequently sol fertility and yields decrease over time (Ren et al., 2021; Man et al., 2021; Nukeshev et al., 2018). The grain legume crop rotations and vanguard technologies (Petrus et al., 2020) can solve the problem of nitrogen replenishment, but phosphorus deficiency under conditions without in-soil site-specific application cannot be solved. The current state of cultivated soils shows that 80% of them do not contain mobile phosphorus and nitrogen (Nukeshev et al., 2019; Kenenbaev et al., 2018). Therefore, the first place to revive soil fertility is through a concern for the timely supply of soil with nutrients, and the most important role is the optimization of the nitrogen supply to plants (Nukeshev et al., 2019; Zavalin and Sokolov, 2019; Antonova, 2018 Walsh and Christiaens, 2016).

The review of research works and advanced agricultural practices show that the issues related to mineral fertilizer application by scattering methods have been mainly resolved. However, the mechanical and technological basics of the tiered site-specific intra-soil application of granular and liquid mineral fertilizers have not been developed yet (Tanbayev et al., 2022). Earlier studies (Eskhozhin et al., 2014; Asaf et al., 2007; Alonso-Marroquín and Herrmann, 2005; Aday and Ramadhan, 2019) did not consider issues of interaction of the working tool of the chisel fertilizer with the soil and dependencies connecting its tractive force with design parameters were not defined. Thus, developing technical means for the site-specific application of solid and liquid fertilizers into the soil and considering the nutrient stock in each elementary area of the field and potential yields is an urgent task. In this work, the interaction of the proposed inclined working body with the soil and the interaction between fertilizer granules and walls of the distributor that determine the optimal parameters of the chisel working body are considered.

The combination of inclined chiseling and the distribution of the main dose of fertilizers into several soil tiers provide solving of the soil compaction and depletion problems. Chiseling is a kind of deep no-till tillage, during which the soil is plowed with a narrow chisel located at the bottom of the ripper-distributor stand and, in the meantime, collapses down on the sides and in front of the stand at an angle of ? 45° (Seifullin, 2020).
This work aims to study the interaction between the cutting parts of the ripper-distributor and soil and determine the relationship between traction and design parameters of the working tool. The working tool and soil interaction are understood as a dihedral wedge impact on the soil when it moves in soil with a certain speed and force.

Theoretical investigations were based on the laws of classical mechanics. In order to verify the obtained theoretical calculation results and determine the traction resistance of the chisel-fertilizer working tool, the laboratory experiments were conducted in the soil channel at a fertilizer depth of 30 cm and a driving speed of 0.87 to 3.1 m/s. A measuring information system with data output to a personal computer and an electronic dynamometer with the maximum permissible relative error of ±0.45% (DEP3-1D-10P-2) were used in laboratory experiments.

2.1. Design of the working tool of chisel fertilizer

The implement moves in the soil at speed  (m/s) and acts on it with force Pb (N), resulting from normal and friction forces on the blade face. The soil resists the movement of the ripper-distributor through the following forces:

Q – soil layer resistance in front of the ripper-distributor;

J – dynamic impact of soil on the working body;

Gb – soil layer resistance on the front edge of the blade; and

Gs – lateral impact of soil layer on the second edge.

The lateral impact can also occur on the second edge after point B. Obviously, this force is much smaller than the others, so it can be disregarded.

Forces Pb, Gb and Gs are directed at an angle of friction to the normal surface (Figure 5) and characterize the soil resistance to deformations arising in it due to the impact of the ripper-distributor tool. The resistance of the soil layer at the front is directed against the movement of the working device.

Determine the pulling force of the tool as it moves in the soil. Consider the speed triangle (Figure 2 ?DLE). Based on this, we have:

From the last expression and Figure 4, the absolute speed of the particles ?a will be directed at an angle a/2 to the direction of the y-axis.

By composing and solving the equations of equilibrium of the forces acting to the x, and y-axes directions, eventually, it was obtained the dependence of the traction force Pb on the following parameters: the working body cutting angle (?); friction angle (?); blade length, and the side edge of the wedge (ll); the working body width (b); working depth (h); the working body velocity (?) and the soil density (?).

The theoretical solution and calculation have determined the equation of the tractive force Pb (3):

The resulting equation (3) shows that the traction resistance Pb of the implement has a proportional relationship to the width b, working depth h, and cutting angle ? of the working tool and a quadratic relationship to its forward speed ?. At a working depth of h = 0.3 m and a working width of b = 0.45 m, the traction force varied within Pb=906.2 - 4038.5 N (Table 1).

3.2. Study of irregularity in fertilizer distribution

The flow of fertilizer granules in the distributor was modeled using a C.F.D.  software – SolidWorks Flow Simulation®. The process of movement of the mineral fertilizer granules without air supply in the distributor was simulated, and three-dimensional trajectories of the movement in the calculation model (streamlines, fields and indicators of velocity and pressure) were received.

Figure 4 Particle velocity and flow path in the distributor

The laboratory tests of the working tool in the soil channel showed that the force of a single tool at a depth of 0.30 m is 1870 N, which confirms satisfactory agreement of the data from theoretical and experimental studies (95.5%).

To check the quality of mineral fertilizers distribution over the distributor compartments a laboratory stand was developed that allows different rates of fertilizer to be applied to the spreader tube.

At application rates of 200–400 kg/ha, the non-uniformity of the seed, which varies between 8%–10%, is drastically reduced. This is achieved through the design of the distributor, which has a sloping part (head) with a rectangular cross-section. In this part of the distributor, the chaotically moving granular flow receives a uniform, set-like movement along the rectangular cross-section and is distributed in equal portions to the compartments. At this point, it should be noted that using the head with other types of cross-sections has not yielded positive results, even at higher dosages. For example, when a circular cross-section, the granules accumulated in the lower part due to the concave surface, and most of the granules fell into the middle compartment.  The use of vertical pipes also did not affect the distribution quality. Laboratory and field tests were conducted under two conditions at 5.82 and 8.77 km/h. The soil moisture in the test plot was 18.9%. Under the noted conditions, the ripper-distributor ensures tillage to a depth of 32–35 cm with fertilizer application in form of inclined belt with a width of 25–29 cm.

The cultivator-fertilizer RUN-4 "Mineral", designed for applying mineral fertilizer (50–480 kg/ha) and deep tillage to a depth of 25–30 cm, was chosen as a comparative machine. In this process, fertilizer granules are applied in a horizontal band with a width of 5–6 cm to a depth of 20.3–21.1 cm. The comparative quality indicators of the process performance are shown in Table 2.

One of the most important indicators of distributor quality is the distribution uniformity of the material over the entire width of seeding. The experimental distributor's application rate irregularity is 14.2 to 14.8%, which is lower than its counterpart. A laboratory study of site-specific liquid fertilizer application is the aim of further work to standardize the chisel fertilizer.

The design of a working tool for intra-soil application of fertilizers was developed, and the dependence of traction force on its design parameters was obtained. Optimal cutting angle ?=16-20º and machine speed ?=1.8-2.0 m/s were determined based on the minimum tractive force. Laboratory tests in the soil trench show that the traction force of a single working tool at a depth of 0.30 m is 1870 N, which confirms satisfactory convergence of data from theoretical and experimental studies (95.5%). The verification of the quality of mineral fertilizer distribution in the compartments of the working tool showed that the distribution non-uniformity of the of fertilizer grains when changing dose D from 50 to 400 kg/ha varied from 7.8% to 22.7%. The laboratory and field tests showed that the designed chisel-fertilizer ensures the processing and sloping of fertilizers with a bandwidth up to 35 cm to a depth of 5.6-25.8 cm with 14-15% non-uniformity over the width of the spreader. A laboratory study of site-specific liquid fertilizer application is the aim of further work to standardize the chisel fertilizer.