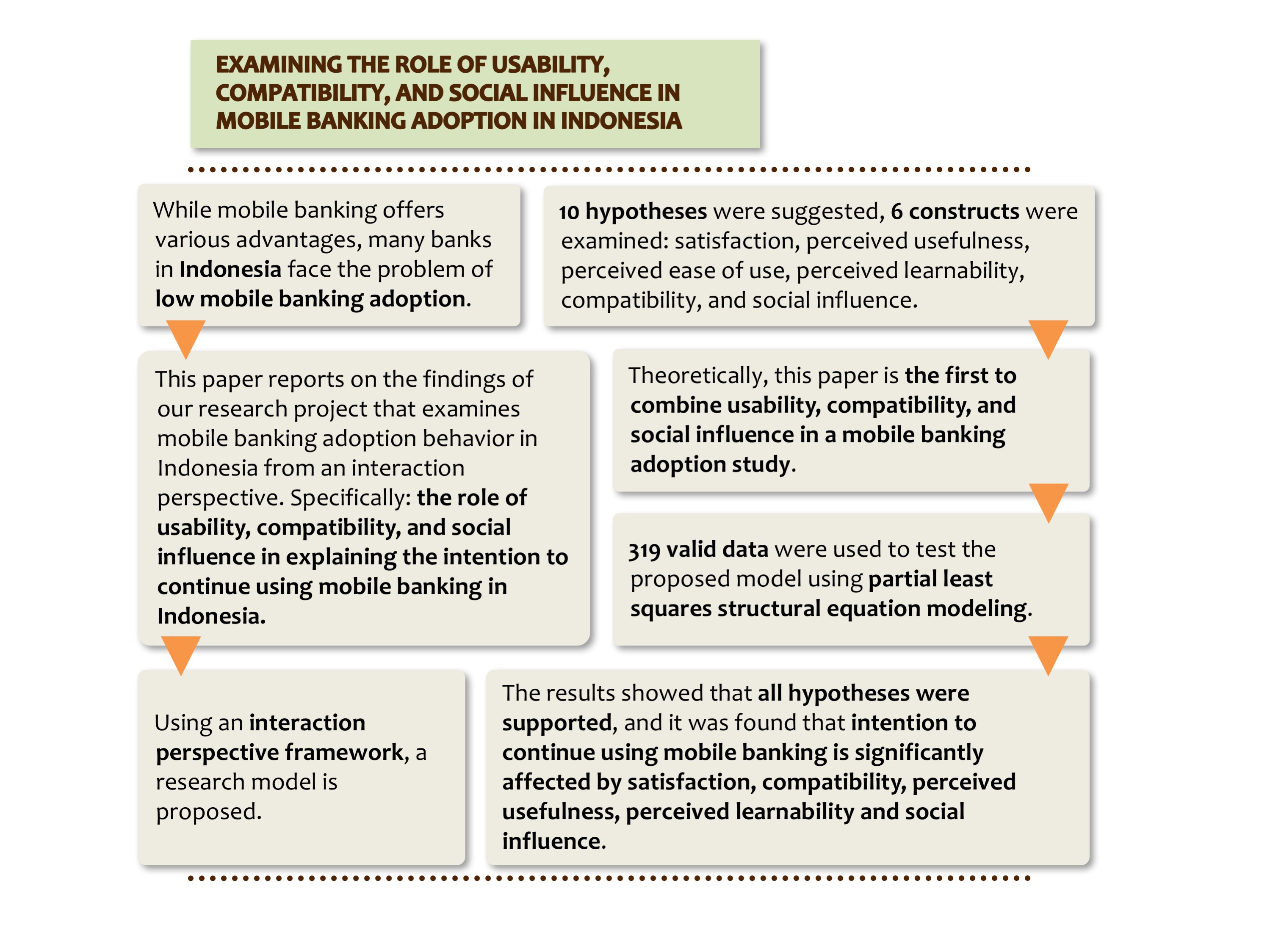 Adaptation to the internet and advances in mobile technology has become key to the survival of industries and has changed the way companies satisfy the needs of their consumers. Banking industries have developed various electronic banking channels to conform to various customer needs. One of the latest channels is mobile banking, which provides various financial services for consumers through information and communication technologies (Hanafizadeh et al., 2014).

Many scholars have been interested in studying consumer adoption of technology in general, as well as the adoption of mobile banking. The literature on the adoption of technology provides several well-known models; for example, the Technology Adoption Model/TAM (Davis et al., 1989); the Diffusion of Innovation Theory/DOI (Rogers, 2003); and the Unified Theory of Acceptance and Usage of Technology/UTAUT (Venkatesh et al., 2003). These models have been widely used in mobile banking adoption studies, combined with or supplemented by various constructs. Koenig-Lewis et al. (2010) combined TAM and DOI with consumer behavior, while Riquelme and Rios (2010) integrated TAM, DOI, risk and gender. Zhou et al. (2010) blended UTAUT with the Task-Technology Fit model (Goodhue & Thompson, 1995) and Wessels and Drennan (2010) applied the Self-Service Technology/Intention to Use model, a modification of TAM, combining it with interaction need and risk. Akturan and Tezcan (2012) extended TAM by adding benefit and risk, while Al-Jabri and Sohail (2012) supplemented DOI with risk. Bidar et al. (2014) and Hanafizadeh et al. (2014) employed various constructs from various adoption models, including TAM, and Baptista and Oliveira (2015) applied UTAUT2 (Venkatesh et al., 2012), extending it by adding culture. Khasawneh (2015) supplemented TAM with trust and credibility, while Alalwan et al. (2016) complemented it with risk and self-efficacy. Several studies have used certain perspectives; for example, the benefit-cost perspective (Shen et al., 2010); innovation characteristics and trust (Lin, 2011); trust and flow experience (Zhou, 2012); and innovation characteristics, brand association and risk (Chen, 2013).

This paper reports on the findings of our research project, which examined mobile banking adoption behavior in Indonesia from an interaction perspective. Specifically, the paper examines the role of usability, compatibility and social influence in explaining users’ intention to continue using mobile banking in Indonesia. While our preliminary work investigated the first type of interaction in the interaction perspective framework, this paper extends the examination to the second type, i.e. individual-environment interaction. Many people, especially in Indonesia, have close relations and interactions with their social environment. We believe that the influence of the social environment also plays a crucial role in driving individual behavior. While Venkatesh et al. (2003) argue that the role of social influence has been debatable, empirical evidence has shown the positive effect of social influence on mobile banking adoption (Zhou et al., 2010; Bidar et al., 2014).

The remainder of this paper is organized as follows. The following section explains the conceptual model development and data collection method, and is followed by discussion of the results in Section 3. The conclusion and proposals for future research are presented in Section 4.

The research model has been proven to be able to explain a high percentage of continuance usage intention variance. This suggests that examination of the interaction between individuals and technology, represented by usability and compatibility, along with the interaction between individuals and the social environment, can help to understand mobile banking adoption behavior.

The research used convenience sampling to collect empirical data, thus limiting the generalization of the findings. The study also only partially investigates the interaction perspective framework; future work will be to examine all the interaction types in the framework. An analysis of the differences between different sample characteristics and their influence on the intention to continue using mobile banking would also contribute to better understanding of bank customer adoption behavior.

The authors wish to thank Direktorat Riset dan Pengabdian Masyarakat and Direktorat Jenderal Penguatan Riset dan Pengembangan, Ministry of Research, Technology and Higher Education of the Republic of Indonesia for their financial support in this research through Hibah Penelitian Disertasi Doktor 2017 (Research Contract No. 1598/K4/KM/2017).

Mendoza, A., Stern, L., Carroll, J., 2010. "Learnability" as a Positive Influence on Technology Use. In: The 8th International Conference on Education and Information Systems, Technologies and Applications, Orlando, Florida

Moore, G.C., Benbasat, I., 1991. Development of an Instrument to Measure the Perceptions of Adopting an Information Technology Innovation. Information Systems Research, Volume 2(3), pp. 192–222

Sitorus, H.M., Govindaraju, R., Wiratmadja, I.I., Sudirman, I., 2016. The Customer Adoption of Mobile Banking from an Interaction Perspective. In: The International Conference on Data and Software Engineering (ICoDSE), Denpasar, Indonesia