Cite this article as:
Purnowidodo, A., Anam, K., Darmadi, D.B., Wahjudi, A. 2018. The Effect of Fiber Orientation and Stress Ratio on the Crack Growth Behavior of Fiber Metal Laminates (FMLs). International Journal of Technology. Volume 9(5), pp. 1039-1048 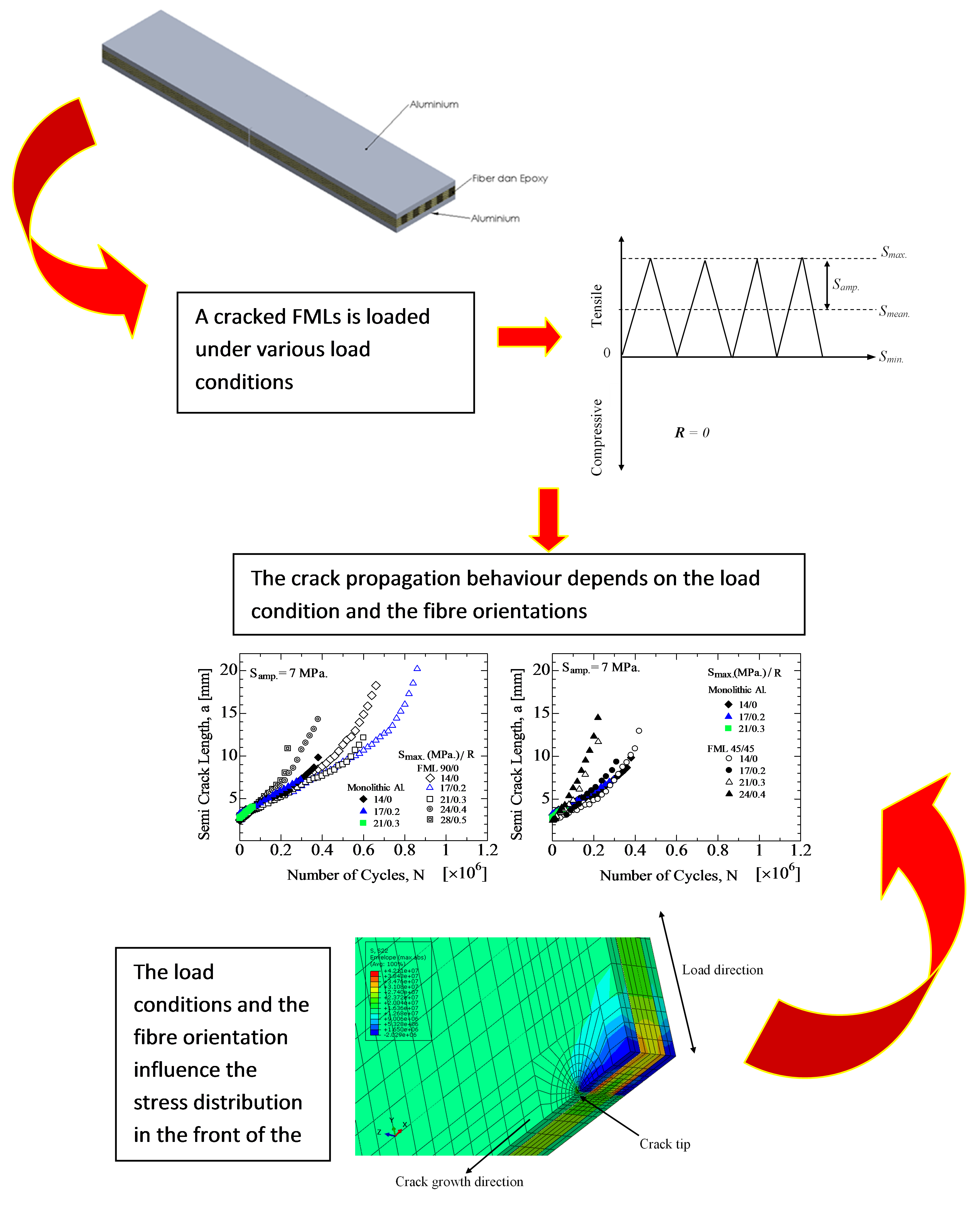 The crack growth behavior of fiber metal laminates (FMLs) with fiber orientations of 90°/0° and 45°/45° to load direction was investigated with varying stress ratios of the cyclic constant load. The study shows that crack growth behavior depends on the conditions of the cyclic load and the orientation of the fiberglass orientation. A higher stress ratio of the cyclic constant load causes fatigue life to decrease, and is associated with stress concentration just in front of the crack tip. The stress concentration in the FMLs with 45o/45o fiberglass orientation is higher than that of 90o/0o, which means the fatigue life in the former is shorter. The bridging of the fiber-epoxy composite takes place when the stress ratio of the constant cyclic load is lower than 0.4, which also enhances fatigue life.

Nowadays, lightweight materials are commonly used in certain structures such as airplanes and boats, but these structures require high strength materials in order to ensure their safety. The strength to weight ratio is a parameter used to determine whether a material meets the requirement of a light weight structure or not. It is known that composites have a good strength to weight ratio, and in general airplane structures are made from these (Jones, 1999; Barsom & Ro?e, 1999; Stephens et al., 2001; Callister Jr. & Rethwisch, 2007; Jones et al., 2016). The strength and weight of a composite depend on the material composing it; in general, it is composed of two parts, the matrix and reinforcement (Jones, 1999; Callister Jr. & Rethwisch, 2007; Jones et al., 2016). There are several categories of composites, one of which is the fiber metal laminate type, also known as FMLs. This composite is used as the skin of an airplane body because its strength to weight ratio is very good (Jones, 1999; Callister Jr. & Rethwisch, 2007). FMLs are composed of at least two plies of different materials. To reduce weight, a metal ply is usually combined with a ply of a fiber based composite (Jones, 1999). Carbon or glass fiber is used as the reinforcement of the composite.

It is almost inevitable that structures are subjected to dynamic rather than static load, and most cases of component failure are associated with this type of load (Barsom & Ro?e, 1999; Stephens et al., 2001; Jones et al., 2016). Dynamic load is more of a danger to the components of a structure than static load, although the magnitude of dynamic load is much lower (Barsom & Ro?e, 1999; Stephens et al., 2001). Fatigue failure is a type of failure relating to dynamic load, which originates in a crack initiation in a component; the crack then grows to a critical length. If the crack reaches this critical length, the component is no longer capable of carrying the load, so it will fail. To estimate the lifetime of components subjected to dynamic load, a method based on crack growth is often used; using this method, the lifetime of components can be estimated before cracks reach a critical length.

The study shows that the crack growth behavior of FMLs under a cyclic constant load is influenced by the conditions of the load. It can be concluded that the crack growth behavior is affected by the stress ratio and the fiberglass orientation. A higher stress ratio causes the stress concentrating just in front of the crack tip also to be higher, which causes the fatigue life to decrease. Because this concentration in the FMLs with 45o/45o fiberglass orientation is higher than that of the 90o/0o cases, the fatigue life of the 45o/45o FMLs is shorter. In addition, bridging of the fiber-epoxy composite takes place when the stress ratio of the constant cyclic load is lower than 0.4, which also enhances the fatigue life.