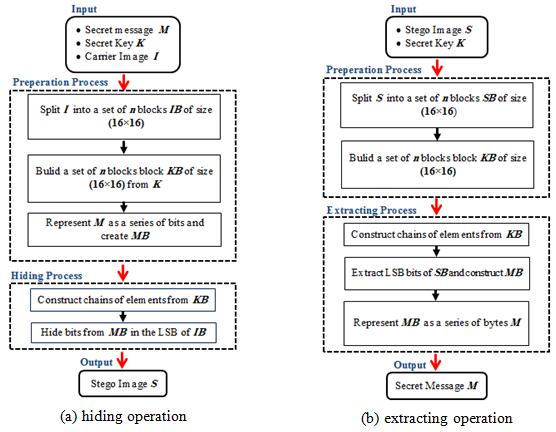 With the wide range use of digital communication technologies, the Internet has been commonly used as a channel for transmitting various images. Steganography practises have been implemented for achieving such secure transmission. The main focus of steganography is data hiding where, digital images are utilized as the cover image. One of the image steganography techniques is based on LSB method, where the secret message bits are embedded sequentially in LSB of the bytes of the carrier image. This makes the hidden message vulnerable to detection by attackers. Many secret key image steganography techniques have been developed as alternative techniques to achieve a high level of security for the hidden secret message. But, these techniques failed to use the full capacity of the carrier image. In this paper, a secret key image steganography technique has been implemented using chains of a random sequence of indices (codes) of the bytes in the carrier image. These chains have been constructed based on the secret key used. This makes the hidden message more secure and difficult to depict by attackers. Furthermore, the proposed technique uses the full capacity of the carrier image. Visual and numerical tests have been conducted for the performance of the proposed technique, the recorded results proved it can be used effectively in the field of information hiding.

Information security has become an important challenge in data networks via Internet. Steganography and cryptography are employed to achieve the confidentiality of common data such as text, images and videos. Steganography is regarded to be the best method to secure an image because the hidden message is not perceptible for inspection by unauthorized access. Steganography plays the central role in secret message communication (Al-Husainy & Uliyan 2017).

The scenario of steganography starts by selecting an appropriate message carrier before hiding process, an image is considered as a good carrier to embed secret message. An effective message to be hidden as well as a stego key between sender and receiver shared as a secret stego key. Carrier image is defined as the object, where the message is hidden. Various types of files have been selected to hide messages. For instance, images, video, audio and text documents (Pal & Pramanik, 2013).

Secret  image  represents  the  image  to  be  embedded  in  the  carrier  image, and stego image represents the image that holding the hidden message. The main goal of steganography is to make a stego image, which carries the secret messages. A secret stego keyis defined as password, which is an additional secret information required to protect the hidden secret image (Prasad & Pal, 2017).

The success of the image steganography methods depends on exploiting the weak point of detecting minor changes happened in the stego-image pixels. These changes made by the human visual system (HVS). There are some major properties that determine the strength and weaknesses of the image steganography techniques (Purohit & Sridhar, 2014): capacity, robustness, undetectability.

These goals are hard to achieve at the same time. Hiding long message makes it more vulnerable to detect by attackers, (i.e. It becomes less secure) and vice versa. One of the common techniques to do steganography is hiding secret messages in the least significant bit (LSB) of the image plane. LSB techniques in terms of the competing major properties are considered as a practical way to conceal messages in the spatial domain of the image plane. Furthermore, it can hide large quantities of data, for instance, high payload capacity (Hamid et al., 2012).

Least significant bit (LSB) is the traditional method of embedding secret information in a digital image (Yadav et al., 2014), (Uliyan & Al-Husainy, 2017). The traditional method uses the LSB of the pixels in the cover image to hide the bits of the secret message. This usually causes distortion in the stego image and the ratio of distortion depends mainly on the number of changes that occur in the LSB of pixels. This distortion must keep at the minimum to drive away any doubt about the presence of the secret message in the stego image.

In the field of information security, many researchers focused on innovation of strong steganography techniques. The main focus of this paper is on spatial domain techniques based on LSB. Various LSB techniques for image steganography have been covered (Trivedi et al., 2016).

One of the major goals of steganography techniques is to increase the amount of data hidden in the cover image; this certainly needs to use a large number of bits of pixels of the cover image. But, it raises the distortion ratio in the stego image and affects negatively on the quality of the stego image (Tiwari et al., 2014).

(Al-Husainy, 2012) proposed a steganography technique ,which reduces the distortion that occurs in the Stego image pixels through dividing the secret message into a set of blocks of the same length and finding the best similarity between LSBs of pixels and the blocks.

An image steganography technique based on dynamic pattern has been proposed by (Thiyagarajan et al., 2012). Through generating a dynamic pattern in the selection of indicator sequence, this technique aims to strengthen the security of hidden data. To minimize the distortion in the pixels, data should embed in the insignificant color channel of pixels and exclude the significant color channel.

(Rana & Singh, 2010) suggested LSB image steganography technique by using a pre-determined random selection of pixels; dividing the cover image to a set of segments and dividing the secret message into four blocks after encrypting it using data encryption standard (DES) method. A predetermined method is used to select a pixel in each block; each pixel represents the stego key. Three levels of security used in this technique through a combination of odd and even rows and columns respectively.

Novel steganography technique for the RGB format images has been presented by (Nilizadeh & Nilchi, 2013). It embeds a secret text in the blue layer of certain blocks. At the first, each block chooses a unique t1 × t2 matrix of pixels as a pattern, using the bit difference of neighbourhood pixels, for each keyboard character. Then, a secret message is hidden in the remaining part of the block. Blocks are chosen randomly using a random generator for increasing the security.

The proposed technique works to use all the LSB of the pixels in the cover image in a random sequence. This will help to achieve the use of the full capacity of the cover image and provide high protection of the hidden data against the attackers. It proposed a secret key steganography technique, where it uses a secret key of size (256×8 bits = 2048 bits).

The rest of this paper is organized as follows: Proposed method will be introduced in Section 2. Section 3 presents Experimental results and performance analysis. In Section 4, Conclusions are drawn.

The technique uses all the cover image pixels to achieve the full capacity. The technique uses relatively large Stego secret key (16×16) with the extraction of a chain of elements from it to achieve maximum randomization in selecting pixels in the hiding stage which lead to making this technique more robust.

The authors are grateful to the Middle East University, Amman, Jordan for the financial support granted to cover the publication fee of this research article.