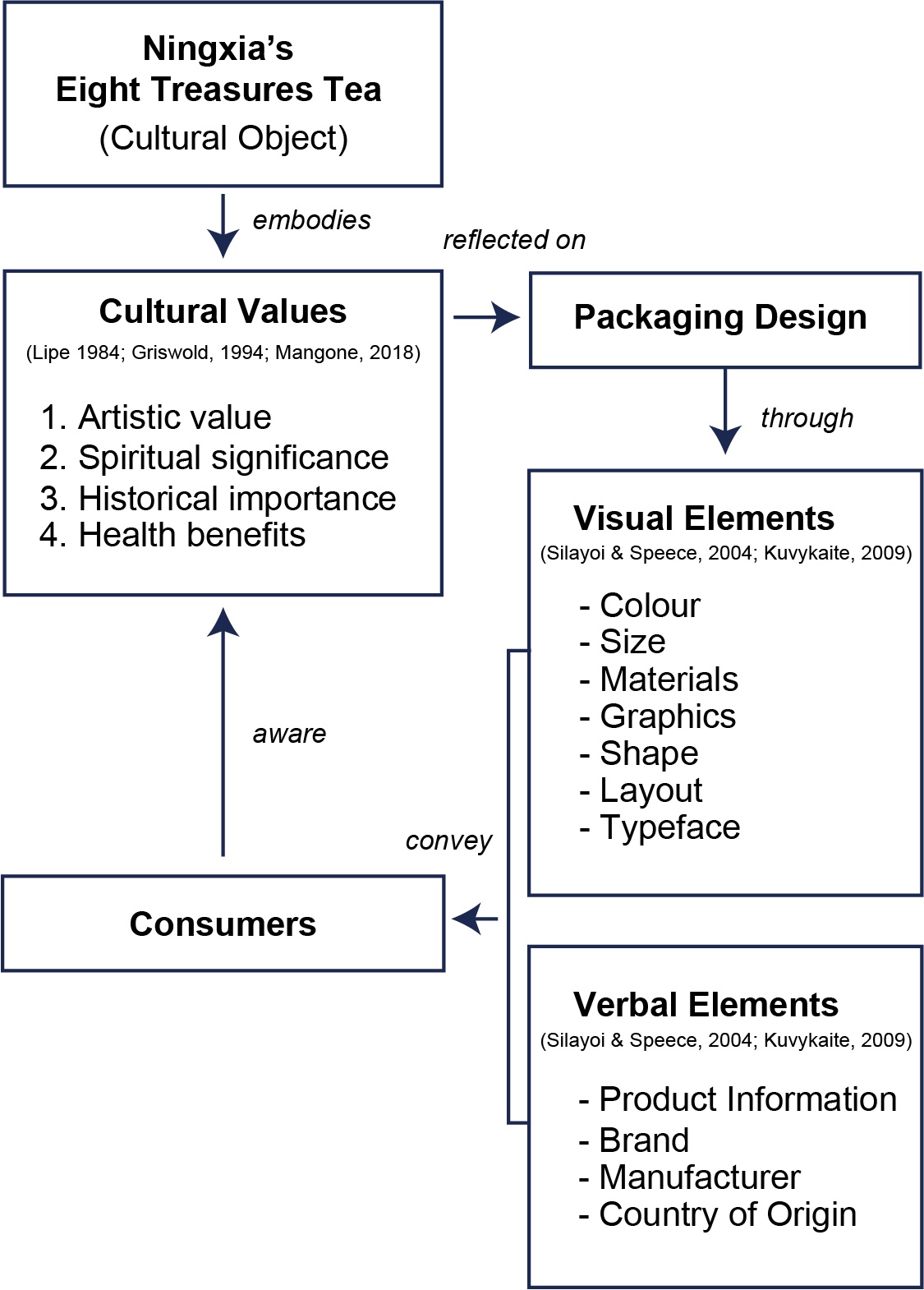 “Eight Treasures Tea” is a unique type of herbal tea from Ningxia province in China. It is recognized as a cultural legacy of Ningxia due to its unique recipe, medicinal properties, health benefits, and rich history of thousands of years. However, the public in China, especially the young generation, seems unaware of these cultural and nutritional characteristics of Ningxia’s Eight Treasures Tea. A preliminary observation has shown that visual and verbal elements of the existing Ningxia’s Eight Treasures Tea packaging design are insufficient to articulate its ‘values’ as a cultural object to the public. The study develops a conceptual framework based on a literature review to address this gap. It proposes a practice-based research methodology using various data collection methods, including visual analysis, semi-structured interviews, and reflective practice, to produce a creative packaging that can effectively embody the cultural values of Ningxia’s Eight Treasures Tea. This study demonstrates the interrelated connection between research and training and the critical role of a practitioner as a researcher rather than just an information processor.

The story of tea began in China. According to ‘The Classic of Tea’ (Lu & Jiang, 2015), tea has been a popular beverage since the Tang Dynasty, and the Chinese proudly refer to it as a national drink. The Chinese population consumed over 288 billion yuan of tea in 2020, around 5.54% more than in 2019 (CNFIA, 2020). The China Tea Marketing Association (CTMA, 2020) predicted that the tea consumption rate in China would grow in tandem with the increased awareness of the Chinese of the health benefits of tea in the following years. Tea products have enormous potential in today’s Chinese consumption market.

The different varieties of teas embody the histories, cultures, and customs of other regions in China. The distinctiveness of an area may give its tea and tea culture a unique identity. “Eight Treasures Tea” is a signature herbal tea of Ningxia province, China, with an abundance history of more than 1,400 years (Huang, 2007). It is one of the cultural heritages listed in Ningxia (Zhang, 2022). In addition, Cao et al. (2018) highlighted that the making and drinking process of Ningxia’s Eight Treasures Tea involves displaying and transmitting specific cultures, rituals, and customs. These features are different from the tea cultures of other regions in China. In light of this, Eight Treasures Tea can be considered a significant cultural object of Ningxia.

Although the populace of Ningxia appreciates Eight Treasures Tea, their awareness of its cultural, historical, and nutritional values is rather limited (Cao et al., 2018). The issue is undeniable among the young generation. Experts claimed that there is an urgent need to explore channels to promote the cultural features of Ningxia’s Eight Treasure Tea more effectively (Cao et al., 2018). CBNData & Tmall Tasty (2020) report indicated that packaging is ranked as the third most important factor, besides quality and taste, when people select tea products. The above arguments imply that packaging is a potentially strategic tool used to promote the cultural values of Ningxia’s Eight Treasures Tea to potential consumers.

However, a preliminary observation conducted by the authors of this study indicated that the visual representations of the existing packaging design of Eight Treasures Tea brands in Ningxia are very similar in terms of their choices of optical elements, such as colors, typography, and graphic imageries. Moreover, the packaging only includes basic information (as shown in Figure 1). In other words, the design’s visual and verbal elements have yet to adequately integrate the cultural values of Ningxia’s Eight Treasures Tea. Nevertheless, having said all these, limited literature is available on investigating and interpreting the different dimensions of the cultural values of Ningxia’s Eight Treasures Tea, which creates difficulties and challenges for such integration practice to take place successfully.

Figure 1 Eight Treasures Tea packaging design, observed and collected by the author of the study in Ningxia’s market

Culture significantly influences society and its constituents regarding values, customs, practices, and rituals (Brons, 2005). Hofstede’s theory of cultural dimension describes the influence of culture on the behavioral preferences of society members. Setyaningrum et al. (2022) attempt to investigate the impact of the cultural product on customer satisfaction in Indonesia through a model based on the Hofstede cultural dimension. Hence, culture is a broad term that plays a vital role in guiding people’s behavior.

Cultural objects describe the creation, use, and distribution of objects that could communicate culturally meaningful messages or values to others (Lipe, 1984; Mangone, 2018). Griswold (1994) defined a cultural object as “shared significance embodied in the form”. It is an audible, visible, tangible, socially meaningful expression (Griswold, 1994). What distinguishes ‘cultural objects’ from ‘ordinary objects’ is their ‘cultural worth’, or so-called ‘cultural value’ (Lipe, 1984). Cultural value is a multifaceted concept. People of different cultures appreciate the value of a particular cultural object because of various reasons (Lipe, 1984). It is learned from the literature (Lipe, 1984; Griswold, 1994; Mangone, 2018) that cultural objects interpret cultural values from four main dimensions. These dimensions are (1) artistic value, (2) health benefits, (3) spiritual significance, (4) historical importance.

Ningxia’s Eight Treasures Tea is significant evidence of the prosperity of trade and commerce in ancient China. It originated from the Silk Road during the Tang Dynasty. Those traders boiled tea with dried fruits to help them to get rid of fatigue, and later such tea boiling methods became a habit of welcoming the guests (Cao et al., 2018). As illustrated in Figure 2, several edible and medicinal ingredients made the original Eight Treasures. It is prepared by considering a scientific formula and caused by tea leaves as raw materials and blends, especially with generally eight to ten kinds of ingredients such as wolfberries, oleasters, walnuts, cinnamon meats, sesames, raisins, jujubes, rock sugar, and so on (Huang, 2007; Cao et al., 2018).  The history and origins, the customs that have developed over time, and the nutritional properties of the ingredients directly or indirectly reflect the cultural value of Ningxia’s Eight Treasures Tea in different dimensions.