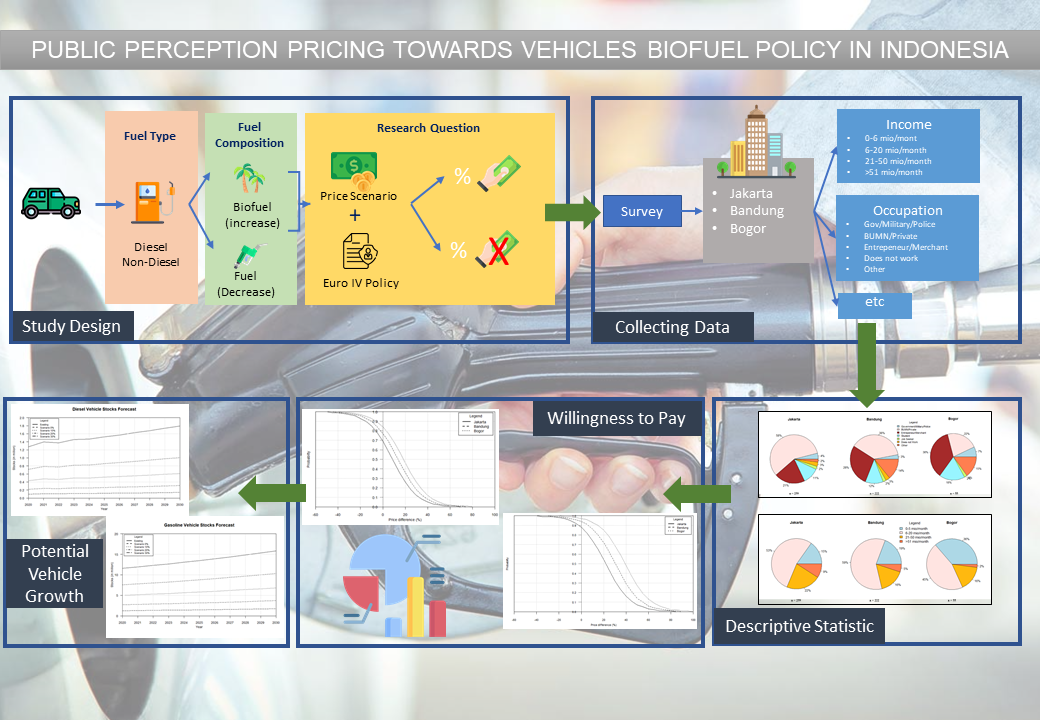 The Indonesian government established that Indonesia would implement EURO IV standard emissions by the end of 2021. Furthermore, to enhance the corresponding policy, the Indonesian government also eliminated policy incentives for fossil fuels, such as the fuel price subsidy. As an alternative, the government now supports biofuel as a new fuel technology to improve environmental conditions and increase palm production in Indonesia. The aim of this paper is to determine public perception toward the pricing policy at the time biofuel is introduced. We apply a discrete choice model through a stated preference survey. We found that the majority of people would shift to biofuel and particularly to green diesel, despite its higher price than current fuels, due to its similar molecular structure to petroleum diesel and its even better diesel properties. However, this condition only applies if no other alternative exists and if implementing EURO IV standard emissions becomes mandatory. Moreover, the implementation of biofuel and the EURO IV policy will also affect vehicle demand and purchases. Therefore, vehicle manufacturers need to be prepared for the increasing demand for particular types of vehicles.

Indonesia has introduced a biofuel policy, and an increase of 23% usage is expected by the end of 2024 (Ministry of National Development Planning, 2020). This policy forms part of the government’s strategy to shift to greener energy sources and its commitment to sustainable development goals. This policy will also cope with the country’s fuel problems, considering the substantial amount of crude oil production. Despite the increased demand for fossil fuels in Indonesia, the government insists on implementing the EURO IV standard emissions. Since May 2016, Indonesia has decided not to extend its membership in the Organization of the Petroleum Exporting Countries (OPEC) (Jensen and Asmarini, 2016). It has now become a net importer of oil (due to the decline in production and a rapid increase in domestic consumption) and can no longer meet its production quota.

OPEC itself is an intergovernmental organization of 13 countries that aims to "coordinate and unify petroleum policies of its member countries and ensure the stabilization of oil markets, to secure an efficient, economical, and regular supply of petroleum to consumers, a steady income to producers, and a fair return on capital for those investing in the petroleum industry" (Organization of the Petroleum Exporting Countries, 2021). Furthermore, the reserves of crude oil in Indonesia are relatively low, especially compared to Venezuela (one of the biggest oil exporters in the world). Despite all its problems, Indonesia has considerable numerous potential for coping with its fuel problem. One example is the utilization of palm oil as an alternative fuel, as Indonesia is well known as one of the world's biggest palm oil exporters. Therefore, Indonesia intends to implement a biofuel policy starting in 2030. As an alternative fuel option, palm biofuel offers several advantages, such as cheaper production costs, cleaner production methods, and reduced environmental issues (Kaniapan et al., 2021).

Along with implementing this biofuel policy, the Indonesian government has also insisted on implementing the EURO IV emission standard, as Indonesia still currently implements the EURO II emission standard. The shift from EURO II to EURO IV is a breakthrough move, considering the significant reduction in the emission limits. For example, the limits for Petrol NOx in EURO II versus EURO IV are 0.5 g/km and 0.08 g/km, respectively, equivalent to an 84% reduction. However, the upgraded emission standard is beneficial, particularly for supporting the Paris Agreement to restrain the increase in global temperature to 2oC (preferably 1.5oC) compared to the preindustrial level (United Nations, 2016).

The aim of the present research is to analyze the public perception of the new pricing scheme regarding biofuels in Indonesia. Moreover, the research considers some issues, such as subsidized fuel removal and the EURO IV emission standard implementation. A further aim of the research is to attempt to forecast the potential growth of vehicle purchases based on people’s willingness to pay. The paper consists of several sections: introduction, literature review, methodology, results, analysis, and conclusion.

The transport sector is one of the slowest sectors in terms of decarbonization and varies little based on the energy sources (International Energy Agency, 2017; Fadiran et al., 2021). Fossil fuels are not environmentally friendly, as they produce greenhouse gas (GHG) emissions and deplete an exhaustible resource. Consequently, recent developments have introduced biofuel technology, which is based on renewable organic materials. The second generation of biodiesel, called green diesel, is given a code "D" instead of "B" (e.g., D100) in Indonesia.

Green diesel, also known as biohydrocarbon diesel, is a high-speed diesel engine fuel derived from vegetable materials through certain process technologies that create a hydrocarbon oil with no oxygen content. Hydrotreatment of triglycerides with hydrogen produces green diesel from vegetable oils (Neonufa et al., 2017). The green form is far superior to biodiesel as its molecular structure is similar to petroleum diesel but it has even better diesel properties, including a higher cetane number, lower sulfur content, better oxidation stability, and clearer color than biodiesel. The molecular structure similarity of D100 biohydrocarbon to that of petroleum diesel allows the direct use (drop-in) of green diesel as a substitute for fossil fuels without adjustment of the vehicle engine.

Experiments with green diesel have shown positive results, including no excessive engine noise, as well as increased engine power and cleaner exhaust emissions even at high RPM. This better performance will result in more efficient fuel consumption, as well as a prolonged engine lifetime (Othman et al., 2017). However, several piece of studies have shown a need for capital in research and development to extract and define the optimum composition of biofuels, as defining an optimum market price for B.100 types is difficult without any fiscal incentive. In fact, providing a long-term incentive creates a burden on biofuel industry sustainability. Kutas et al. (2007) applied cost-benefit analysis to capture a successful biofuel blending strategy, as blending fossil and green fuels can be a solution that can provide an optimum market price in countries like Germany (Ninni, 2010), Brazil (Cavalcanti et al., 2012), the USA (Grafton et al., 2012), and China and India (Hassan and Kalam, 2013).

Biodiesel, as a biofuel for diesel engine applications, consists of fatty-acid-methyl-esters (FAMEs) made from vegetable oil or animal fat through an esterification/transesterification process. The transesterification process removes alcohol from the ester using alcohol or methanol as a catalyst (Demirbas, 2009). Biodiesel in the form of FAMEs can be mixed with petroleum diesel in certain volume percentages known as B15, B20, or B30. B30, for example, contains as much as 30% FAME biodiesel in the total volume of B30 fuel, with the remaining 70% ordinary petroleum diesel. The minimum mandatory steps for mixing biodiesel with petroleum diesel, based on the Indonesian Ministry of Energy and Mineral Resources (ESDM) Regulation Number 12 of 2015, are shown in Table 1.

Table 1 The minimum mandatory steps for biodiesel and petroleum mixing

Indonesia plans to apply biofuel vehicle technology in 2030. However, an issue in pricing arises, as the price may differ from the conventional fuel price. Several types of fuel in Indonesia are subsidized, such as premium and solar, as a way to promote and increase biofuel attractiveness. The Indonesian government released Presidential Regulation 191 for the year 2014 that regulates subsidized biofuel use.

A biofuel policy will not succeed if the road user is reluctant to use the biofuel based on the market price. However, both the fuel producers and the vehicle producers can cope with the technology, and they are ready for an investment in massive production. A need exists to assess the road users’ views of an acceptable price through a willingness-to-pay methodology. A continuous public campaign in green energy can also increase society’s awareness and the technology surrounding the choice of environmentally friendly fuels (Karytsas and Theodoropoulou, 2014). A recent study found a positive impact of functional value on people’s willingness to pay for biofuels. This effect suggests that people’s willingness is significantly influenced by biofuel price and quality. The research showed that most of the respondents were willing to pay 10% more for biofuels, and they considered a 10% higher price to be acceptable (Zailani et al., 2019). A similar finding was found in an ethanol price willingness-to-pay study, where the road users tended to pay a higher price for E85 rather than E10 fuel due to the environmental benefit of E85 (Jensen et al., 2010; Susaeta et al., 2010). Other studies show a request for discounted prices (Li and McCluskey, 2017).

The Indonesian government intends to implement a biofuel program to increase palm oil production efficiency and to establish a new environmentally friendly fuel alternative. Consequently, the government senses a need to upgrade the emission standard from EURO II to EURO IV and to eliminate policy incentives, such as fuel subsidization, to complement the previous policy and achieve fuel sustainability. Based on our data collection, the majority of the respondents appear willing to pay for more expensive fuel if the policy is mandatory. Interestingly, Jakarta, as an urban area, showed the lowest willingness to pay compared to the other cities due to more varying respondent characteristics. The implementation of biofuel and the EURO IV policy will affect vehicle demand and purchases. Therefore, vehicle manufacturers need to be prepared for the increasing demand for particular types of vehicles.

Tsay, Y., 2009. The Impacts of Economic Crisis on Green Consumption in Taiwan. In: Portland International Conference on Management of Engineering & Technology, pp. 2367–2374