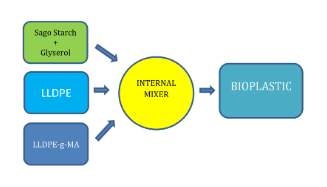 The purpose of this study was to improve the mechanical and physical properties, degradation performance, and water absorption of a thermoplastic mixture of sago starch with the addition of Linear Low-Density Polyethylene (LLDPE). The method used is the grafting method where polyethylene is grafted onto Maleic Anhydride (LLDPE-g-MA). In this research, Thermoplastics Sago Starch (TPSS) was made with a mixture of Sago Starch (65%) and Glycerol (35%), added with water as a solution. Compatibilizer (PE-g-MA) was made by reacting LLDPE (88%) and Maleate Anhydride (9%) with an additional initiator of Benzoyl Peroxide (3%). The concentration of LLDPE varied from 10,15, 20, 25, and 30%. Substances were mixed into an internal mixer Thermo Haake Polydrive with a speed of 100 mm/minute, for 15 minutes. The concentration of 30% LLDPE produced the highest tensile strength and elongation at a break of 4.30 N/mm2 and 2.15%, respectively.  Simultaneously, as LLDPE concentration increased, Young's Modulus decreased. This was powered by the morphology of the sampling surface, with the occurred reaction of adhesion interface or dispersion of LLDPE toward the whole surface with the assistance of compatibilizer as connecting substance between hydrophilic polymer and a hydrophobic polymer, which could improve the properties of mechanical.  The formation of ester groups from the reaction of inter groups of hydroxyls derived from the starch with the groups of anhydride derived from the mixture of compatibilizer was visibly seen at the peak of 1693 cm-1. The degradation performance of the TPSS: LLDPE mixture with a ratio of 70:30 showed good performance where the degradation continued to increase up to 42% on the 30th day of degradation in freshwater, 18% in seawater, and 17% in soil burial. While the water absorption test showed that the higher concentration of LLDPE, the lower speed of water absorption.

In 2018, the production of global plastic was nearly 360 million tons (Barnaba et al., 2020). Meanwhile, the production of bioplastic reached just 2.01 million tons or 0.56 percent of global plastic production (European Bioplastics, 2017). The increasing market of bioplastics could reduce dependency on fossil-based source and transform to be a biobased society (Imre et al., 2019; Geueke et al., 2018 ). Nowadays, approximately 80% of the world's plastic production is not recycled (Blank et al., 2020) and the usage of plastics polluting is on the rise (Sidek et al., 2019). Bioplastic, which by definition is biodegradable and/or gained from a renewable source, is a sustainable alternative to conventional plastic and its production capacity is estimated to increase to 2.43 million tonnes in 2024(European Bioplastics, 2018).

Bioplastics are made from natural polymeric materials such as starch, cellulose, and fats (Amni et al., 2020; Hasan et al., 2019; Silviana & Subagio, 2019; Judawisastra et al., 2018; Suharty et al., 2014). However, bioplastic cannot completely replace the function of conventional plastic yet. Starch-based bioplastic possesses some weaknesses, e.g., low mechanical properties, high water sensitivity (Kaewtatip & Tanrattanakul, 2012; Gáspáret et al., 2005), and rigidness. It is due to the characteristic of Starch that tends to coagulate and create a stressed area that is concentrated, resulting in worse mechanical characteristics (Vinhas et al., 2007; Pedroso & Rosa, 2005). This is because starch has a tendency to coagulate, creating a concentrated area of stress that degrades the material's mechanical characteristics, and it shows fast absorption at high concentrations of starch  (Abdorreza et al., 2011). Mixing thermoplastic starch with synthetic polymers such as polyethylene can increase its mechanical characteristics (Zaman & Beg, 2021; Majid  et al.,2009; Wang & Sun, 2004).
However, due to the difference in polarity where natural polymers are hydrophilic/polar and synthetic polymers are hydrophobic/non-polar so that the two materials are incompatible, the Compatibilizer is needed to unite them through the grafting method. The addition of the compatibilizer is expected to increase the homogeneity of the mixed solution and improve the adhesion between the phase (Sari et al., 2020; Imre & Pukánszky, 2013).
This research examined how different environments (freshwater, seawater, and soil) affected the tensile characteristics, morphology, water absorption, and biodegradation performance of LLDPE.  The distribution morphology of LLDPE on the surface was also in evaluation.
Experimental Methods

In order to prepare TPSS, sago starch and glycerol were reacted at a ratio of 65:35, and water was added at a concentration of up to 250% of the amount of sago starch. The mixture is heated to 100°C until it turns into gelatin. To reduce the water content in TPSS gelatin to 5%, it is oven-dried for 24 hours at 80°C (Majid et al,, 2009). Figure 1 depicts a flowchart of the process of TPSS preparation.

Figure 1  Flow diagram of the process of preparation of TPSS

The blends were mixed with Haake Polydrive Thermo. LLDPE was first added into the mixing chamber, followed by Maleate Anhydride after 5 minutes of a mixture, then Benzoyl Peroxide (BPO) was added at last. The mixture was completed at 1500C and a speed of 100 rpm, with the mixture’s total time, being 15 minutes. The composition comparison of LLDPE: Maleate Anhydrous: Benzoyl Peroxide, the ratio was 88:9:3. The compound was removed, cooled, and cut into pellets. Figure 2 illustrates a Flow Diagram of the Compatibilizer (LLDPE-g-MA) Preparation Process.

The mixture preparation of TPSS / LLDPE/PE-g-MA was the final phase in this research, in which the whole phases that have been prepared above would be mixed here, such as TPSS, LLDPE, and compatibilizer. The compound was produced by mixing TPSS and LLDPE with the comparison of 90:10, 85:15, 80:20, 75:25, and 70:30. PE-g-MA was used with an amount of 10 wt. % based on the weight of TPSS (Majid et al., 2009). Figure 3 shows the process flow diagram of the TPSS/LLDPE/LLDPE-g-MA (compatibilizer) preparation.

The blend of TPSS / LLDPE was printed with hydraulic pressure compression at a temperature of 1500C for 15 minutes. The pressure was increased to its maximum every 5 minutes. All compression molded sheets by ASTM D638 Type 1.

A tensile test was carried out by examining the machine of Universal Band Tensilon with the specimen of ASTM D638 Type 1. The temperature in the chamber was 250C, humidity on 60% RHdn, 10mm speed/minute. 3 Specimens were used to obtain the average value of Tensile Strength, Elongation at Break, and Modulus Young.

Fourier transform infrared spectroscopy (FTIR; Perkin Elmer System 2000) was utilized to obtain qualitative information on the groups and chemical characteristics of TPSS / LLDPE blends. For each spectrum, 45 scans with a resolution of 4 cm-1 were recorded consecutively with Wd: 9:5 mm. The sample was measured in the form of a 1-millimeter-thick layer produced through hot-press molding.

The scanning test of Electron Microscopy (SEM) was carried out to evaluate the morphology surface of the blended sampling of TPSS / LLDPE. The sampling was dried up in the oven to reduce water content and avoid electrostatic filling as well as worse resolution. By the time of sampling surface inspection, it was installed on the piece of aluminum stubs and sputter-coated with a thin layer of gold.

The sampling sheet was cut into a dimension of 20mm x 20mm (Obasi et al., 2015) with a thickness of 3mm. It was then washed with aquadest and dried up to 80% for 12 hours, cooled down in a desiccator, and weighed to gain initial weight. It was then immersed into aquadest for ten days with a chamber temperature of 28-300C and reweighed to gain weight afterward.

The compatible blend of TPSS / LLDPE with a dimension of 20mm x 20mm with a thickness of 3 mm was examined with different condition control (Spaccini et al., 2016; Maran et al., 2014). The first sampling was stored in a container containing just fresh water. The second one was immersed in seawater. The test for weight loss was done every 10, 20, and 30 days.

The sampling was buried at a 10mm depth from the surface of alluvial soil (Henry & Isaac, 2014) which was placed in the holed box. Regularly wet it to keep its humidity. The weight loss of the samples was monitored at regular intervals of 10, 20, and 30th days. The test was carried out by washing the sample with aquadest, drying it up at chamber temperature until its weight remained constant, and then weighing it.

The implemented analysis of Thermogravimetric was STA module with channel TGDTA 7300. The measurement was done at 7.73 mg with a heating rate of 100C/minute. The heating was begun at 30C to 6500C. The rate of nitrogen gas was 50 mL/min.

The Tensile Strength (TS), Elongation at Break (EB), and Young’s Modulus (YM) from the blend of TPSS/LLDPE Compatibilized, as shown in Figure 1, showing the affecting result of additional LLDPE, at the combination of PE –g-MA as a compatibilizer on the tensile strength and elongation at break, experienced continuous increase with the increased concentration of LLDPE from 3.20 N/mm2 become 4.30 N/mm2 and 0.72% to 2.15% at the maximum concentration at LLDPE 30% concentration (Matzinos et al., 2001) as can be seen in Table 1. When the young modulus decreased from 447N/mm2 to 201N/mm2 due to the higher concentration of LLDPE, the young modulus decreased as well. Figure 4-6 illustrates the Tensile Strength (TS), Young's Modulus (YM), and elongation break charts of TPSS/LLDPE compatibilizer blends.

In the TPSS spectrum, there was a wide peak of characteristics at 939-1058 cm-1 as the strain peak of COO, which together with hydroxyl at 3000-3675 cm-1. While the spectrum of copolymer that was used as a compatibilizer shows the peak of anhydride groups at 1707 cm-1. The blended peak of TPSS/LLDPE compatibilizer emerged at 1084 cm-1 and 1148 cm-1 identified as Ester groups which were formed from the reactions of hydroxyl groups at 3265 cm-1 in the TPSS spectrum with the anhydride groups in the spectrum of PE-g-MA at 1693 cm-1. Likewise, previous studies reported the formation of an ester group. (Majid et al., 2009; Bikiaris & Panayiotou, 1998). The FTIR spectra of TPSS, PE-g-MA, and TPSS/LLDPE Compatibilized blends are shown in Figure 7.

Morphology affects the mechanical properties of a product and polymer dispersion evenly, indicating that interface and adhesion have increased. On the other hand, the occurrence of agglomeration in the polymer, shows that there was a worse interface reaction, in which agent dispersion, formed the copolymer with its kind. Differences in polarity were one of the causative factors. As in this TPSS/LLDPE blend, TPSS was the main component of the major blend on the polarized matrix. While LDDPE was the minor component of the dispersed phase, which was expected to be the non-polarizing reinforcing agent. Figure 8 shows how the difference in polarity led to an uneven distribution, which shows that the LLDPE is grouped or aggregated.   (Rodriguez-Gonzalez et al., 2003; Yoo et al., 2001). To unite the natural polymer of hydrophilic with the synthesis polymer, which is hydrophobic, the coupling agent needs an ordinary connector, known as a compatibilizer. In the case of LLDPE, this minor polymer was evenly distributed throughout the blend, providing evidence of interface activity in a heterogeneous polymer blend. This is supported by the fact that bioplastic's mechanical properties increase when compatibilizers are added. Figure 9 shows an SEM image of a compatible blend of TPSS/LLDPE at a 20% LLDPE concentration, scaled to 1:150.

The balance of TPSS water absorption was increased to 120% as can be seen in Figure 10. This resulted from the hydrophilic nature of the starch due to the many hydroxyl groups available to react with the water (Vinhas et al., 2007). The compatibilizer blend of TPSS and LLDPE demonstrates that the balance of water absorption decreased as LLDPE concentration increased. This was probably due to the decrease in the number of hydroxyl groups from starch as the concentration of TPSS decreased, which could have reacted with a water molecule (Obasi et al., 2015; Majid et al., 2009; Gáspár et al., 2005).

Table 2 Performance of degradation in 3 conditions