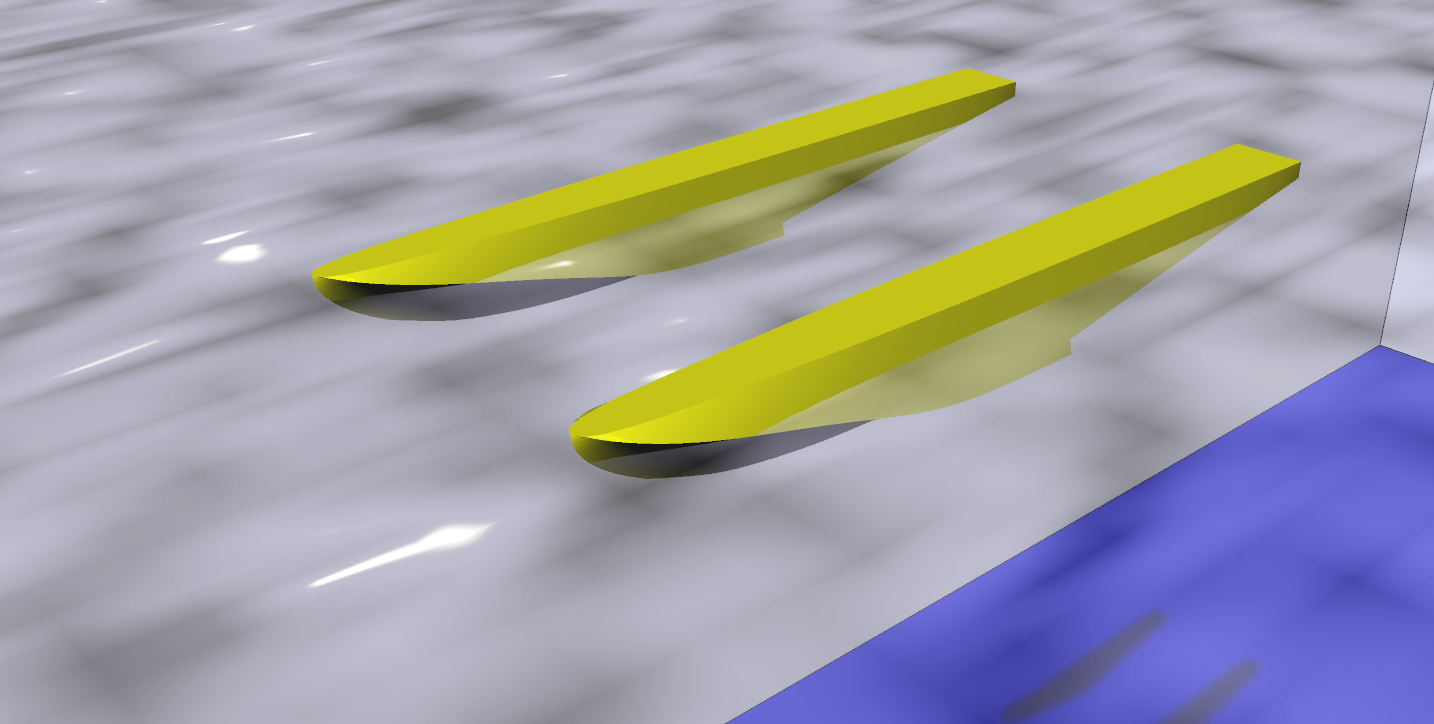 Seaplanes can operate on both land and water, making them suitable for short-distance travel (Xiao et al., 2020). and operations near coastal lines to reduce traffic at municipal airports while improving connectivity between secluded islands (Ito et al., 2016). Except for specific operations and restricted areas, seaplanes have been widely overlooked in modern aviation. Nonetheless, this aircraft model has begun to regain its appeal due to the robust advancements in computational abilities (Ito et al., 2016). Floatplanes, which are an amphibious type of seaplane, are equipped with submerged floats or pontoons underneath their fuselage. A numerical study in 2020 analyzed the optimal separation ratio (S/L) configuration of a catamaran hull design most suitable for the N219 floatplane by implementing a sailfish’s hydrodynamic qualities to minimize the total hull resistance caused by hull interference (Yanuar et al., 2020). This interference is also caused by changes in pressure and flow velocity around the catamaran hulls, which are affected by the form factor (Utama et al., 2021). This has been proven in a numerical study that aimed to clarify the reduced total resistance in a traditional catamaran by modifying the hull form in line with the Lackenby method (Iqbal and Samuel, 2017). The floats or pontoon’s purpose is to provide lift force; any inconsistencies in the lift force led to dynamic instabilities, such as porpoising. The porpoising phenomenon, a rhythmical pitching motion on amphibious vessels equivalent to a swinging sensation (Gudmundsson, 2013), is commonly experienced by floatplanes during takeoff (Aliffrananda and Sulisetyono, 2021). Operability problems, such as increased takeoff time and track length (Gudmundsson, 2013), incidents during takeoff (Federal Aviation Administration [FAA], 2004), inconvenience to pilots and passengers (Faltinsen, 2005), and damage to the floater’s construction (Abrate, 2011), are outcomes of porpoising. A deeper understanding of the complexity of these problems is required to determine methods that can minimize their occurrence.

The risk of porpoising was evaluated in a towing tank using high-speed craft models and two variations of deadrise angles (Day and Haag, 1952). A higher deadrise angle led to an increase in the critical trim, while a higher speed led to a decrease. The results were plotted to represent the longitudinal stability limits induced by different deadrise angles (Savitsky, 1964). In 1999, a program was developed to predict the porpoising instability induced by various deadrise angles, and the longitudinal center of gravity (LCG) (Sulisetyono, 1999) was validated against previous experiments (Day and Haag, 1952). A similar experiment conducted on a speed range of 3–15 m/s found that porpoising began to occur at 5 m/s, with the period decreasing over the increase in speed. The highest porpoising period occurred at 5 m/s while the lowest began at 15 m/s (Katayama, 2004). Another experiment on stepped and regular hulls (Sajedi and Ghadimi, 2020) found that the stepped hull decreased the average of the ship’s heave and pitch motion and the porpoising amplitude. At high speeds, the start of porpoising was delayed on the ship with a stepped hull while at the same Froude number, the ship with a regular hull had begun porpoising (Sajedi and Ghadimi, 2020).

A numerical simulation of porpoising in a large seaplane model (Duan et al., 2019) concluded that the porpoising amplitude started to increase over time. Another similar numerical study was done on a modified N219 aircraft turned into a floatplane with a catamaran hull configuration, and the variations in LCG and deadrise angle were investigated to analyze the effects of LCG and deadrise angle on porpoising (Aliffrananda and Sulisetyono, 2021). The results were compared to a high-speed craft motion experiment (Sajedi and Ghadimi, 2020). A low deadrise angle generated a higher lift force, causing the floater to experience heave faster than other floater models with higher deadrise values. However, the LCG increased the heave and pitch period during porpoising if the LCG was near the stern of the floater (Aliffrananda and Sulisetyono, 2021). From these studies (Duan et al., 2019; Aliffrananda and Sulisetyono, 2021), the conclusion that amplification will continue to happen due to porpoising oscillation if the plane’s position remains uncorrected can be drawn. Despite previous studies on porpoising, studies of its occurrence in floatplanes are still scarce. This paper addresses this research gap by engaging in further analysis of the porpoising phenomenon in floatplanes. The purpose of the analysis is to determine the optimal configuration of both LCG coordinates and the deadrise angle of floaters to mitigate the porpoising phenomenon. This phenomenon was simulated by utilizing computational fluid dynamics (CFD), variations of five traveling speeds, two LCG coordinates, and two deadrise angle variations.

CFD has proven its ability to accurately simulate the porpoising phenomenon on the floaters of a floatplane during takeoff operations. High-speed fluid flows, as the focus of the simulations, were modeled using the unsteady flow RANS equation and the  turbulence model. Structured hexahedral mesh and deformation mesh methods were utilized to accommodate the floater’s motion. The numerical computational setup was validated against the ITTC experiment using the DTMB 5415 models. Based on the dynamic features imposed by the porpoising motion on the floater seen at various speeds, a few conclusions were obtained. First, at both deadrise angle variations, LCG near the floater's bow generated higher heave and pitch porpoising amplitudes. Second, the low deadrise angle gave rise to a higher heave and pitch porpoising amplitude. Finally, the porpoising periods for both motions followed the same pattern, with the values decreasing after reaching its peak. However, higher deadrise angles resulted in overall lower porpoising periods.

The authors would like to thank the National Research and Innovation Agency (BRIN) of Indonesia and the Institut Teknologi Sepuluh Nopember (ITS) for funding this study under the scheme of “Basic Research Awards” with contract number 3/AMD/E1/KP.PTNBH/2020.