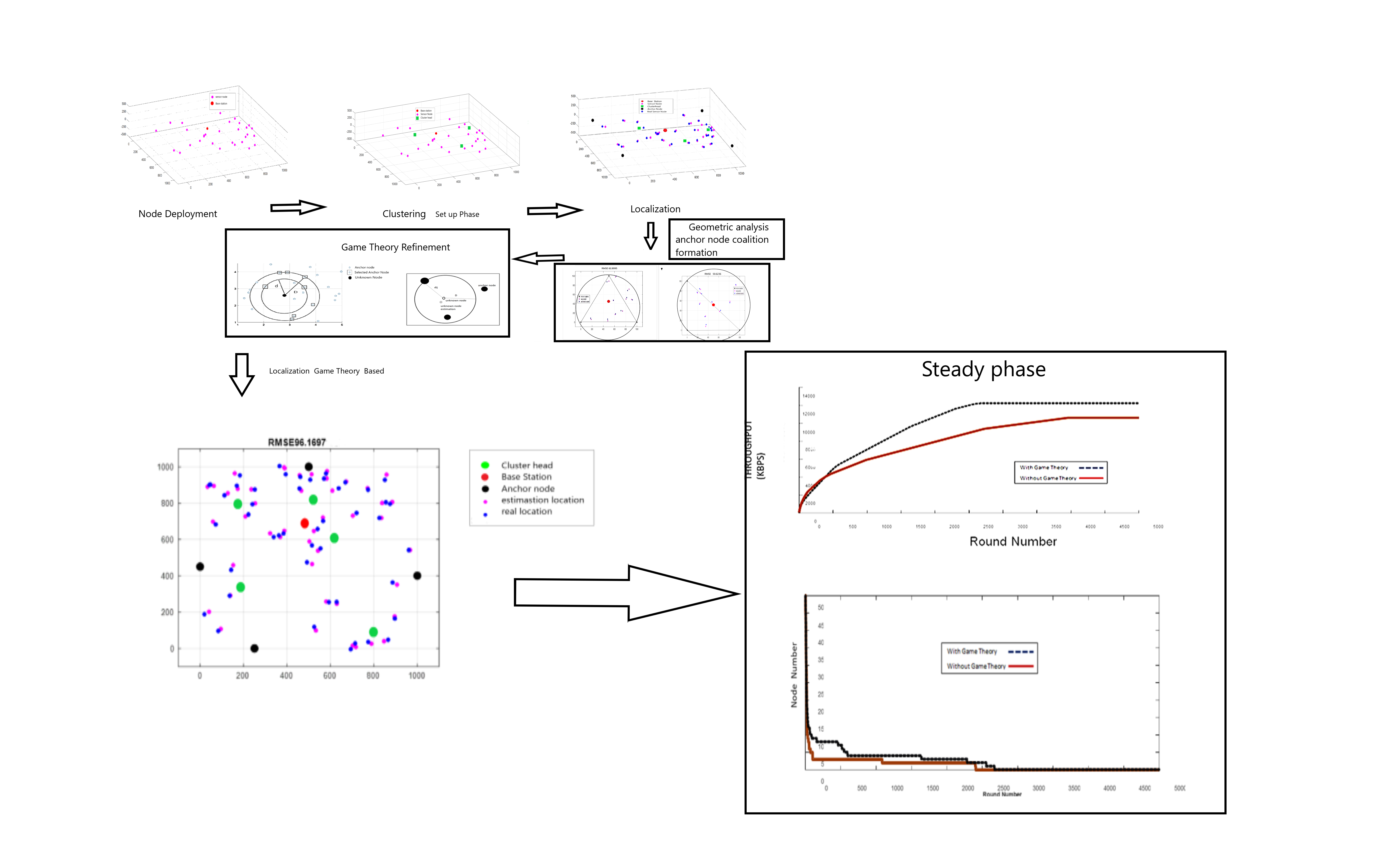 Wireless sensor networks, as remote monitoring system support or Internet of Things subsystems, require reliability and stability, which greatly influence sensor life spans. Optimization efforts were a breakthrough to obtain these requirements. The optimization carried out in this study is related to the clustering-based localization process. The optimization algorithm used was game theory. Simultaneously, clustering information in an energy availability based sensor node configuration helped the sensor node’s tracking process. Optimization in the localization process determined the coalition of anchor nodes, where the selection of nodes as coalition members was conducted through geometric approaches with game theory. This proposed concept was validated using a simulator built on the MATLAB platform. Root Mean Square Error (RMSE) was chosen as a measurement to show accuracy. The simulation results indicated that the number of dead nodes could be delayed by about 1,000 rounds if there are improvements in clustering localization using game theory. The experimental results showed that network performance increased after this cluster-based localization process, which indicated an increase in the number of data packets sent and lifetime of the sensor node. The simulation results for the data delivery test showed a 20% increase in data packets sent.

A distinctive feature of a wireless sensor network (WSN) is that it consists of many sensors with limited energy availability and is often used over long distances. The sensor nodes have sensing, processing, and communication components in addition to storage capabilities. These sensors work to sense some physical phenomenon, and then the information gathered is processed to get relevant results.

Clustering is the initial network management before the localization process. This assists in decreasing the complexity of managing a large-scale sensor network. This mechanism supplies initial information about the subsequent localization process. Generally, cluster members and cluster heads are based on distance or Received Signal Strength Indicator (RSSI) conversion. The simple mechanism of creating a cluster is achieved by calculating the shortest distance between nodes or from one node to a neighboring node. Then, the maximum eigenvalue radius is calculated to construct a map of the relative locations of the nodes. Clustering can also be determined based on residual energy or energy availability. The mechanism for this is the exchange of information between a node and its neighboring nodes. The problem is that determining the distance using the RSSI to distance conversion mechanism still allows errors to occur.

In this research, the objective was to find a suitable localization algorithm design for a WSN that would support the wireless sensors by working stably. In addition, this condition can indirectly reduce energy loss and transmission errors. Ng et al. (2019) determined the factor that reduces the reliability of sensor nodes, which affects the robustness of a network. It also influences the data transmission system of the sensor nodes. They proposed a reliable transport layer protocol that uses a combination of redundant packets and probabilistic transmission to ensure reliable transmission of data to keep the network efficient. Paul and Sato (2017) noted that localization is the provision of physical coordinates for all sensor nodes. Those prior research contributions provided insight for this study through awareness of the various factors and parameters that affect the performance of WSNs by either clustering or localization mechanisms.

Kadi and Alkhayat (2015) discuss many other factors that contribute to late errors in the localization process, such as network density, uncertainty about anchor locations, and density. The placement of anchor nodes in a coalition is an essential prerequisite for accuracy in the sensor nodes’ localization process. Thimmaiah and Mahadevan (2017) clarified that this accuracy is necessary in military, mining, and industrial applications. For example, knowing the exact position of an intruder that is considered the target node is crucial in military operations. They also described a relationship between the transmission failure probability (Marcum’s function value) and the standard deviation of the localization error. The localization error also impacts geographic routing. A comprehensive perspective on the effect of localization errors is given by taking into account the quality of service parameters. Sachidananda et al. (2010) determined that a low probability of transmission failure improves the quality of the information in terms of reliability and timeliness. The novelty in this study is considering the potential fit in the initial view based on the geometry factor of the previous initial experiment. In localization, the game theory algorithm is used to refine the anchor nodes in the coalition. Determining the number of anchor nodes and their placement greatly affects the localization performance. In a network with many sensors and extensive scalability, choosing anchor nodes has its own strategy. That strategy can be considered the game’s rules in game theory, while the sensor node can be considered a player. Earnings in the game can be considered to be the probability of a node becoming an anchor node.

The problem’s background, according to Hadzic et al. (2013), is that many people assume good localization results will occur in a dense sensor network with many anchor nodes. However, the use of enormous power for transmitting and processing all information does not guarantee good localization performance. Hadzic et al. (2013) found that not all anchor nodes provide reliable measurements, but the geometry of a selected reference node has been shown to have a significant impact on localization accuracy. They overcame this problem by assuming that the target node has several anchor nodes nearby, taking a different view. They then used the Cramer–Rao lower bound (CRLB) to capture information about node geometry and ranging quality, such as the quality of distance estimates obtained from noisy measurements received. They model the localization process as a cooperative game and formulate the appropriate utility function, defining node selection optimization as a process that maximizes accuracy. To find anchor nodes they use utility functions. Our study used several strategies to conduct a series of performance evaluations of the localization with various anchor nodes, placing the anchor node near the target node. The first strategy was determining the coalition formed with a minimum of three nodes. If the number of anchor node coalitions was less than three, the quality of the coalition was zero. The utility function in our study was obtained by calculating the amount of energy used for communication and computing, along with the anchor node suitability factor, which was first calculated using the Nash equilibrium approach. The second strategy was to use the utility function as a weighted factor to obtain a target node’s signal range value that was closer to the actual condition. By knowing the radius of the target node, it was possible to estimate the area where the prospective anchor node was located. The third strategy was the geometric method of placing anchor nodes around the target node. Three conditions affect the magnitude of error during localization: whether the topology is in the form of a right triangle, an acute triangle, or an obtuse triangle. In this case, the anchor node topology is not collinear. The concept of a non-collinear anchor node topology was also raised by Sun et al. (2018), who proposed an error control mechanism based on anchor geometric features to determine the nodes that participate in the localization and to estimate the localization confidence.

The remainder of this paper is organized as follows: Section 2 is a brief overview of clustering techniques, localization, game theory, and methodologies used in the localization optimization process. Section 3 presents the process of experimenting and testing cluster-based localization methods with game theory algorithms. Finally, Section 4 summarizes the paper and explains future work.

In implementing a distributed clustering protocol application, problems can arise when there is an imbalance in energy consumption due to a non-uniform distribution of nodes or where nodes have different densities. As a solution, it is proposed to set various optimization mechanisms that determine the boundary values associated with the available energy, and the computation is completed using game theory. During the sensor network’s localization, problems can also occur with determining the anchor node coalition to carry out a trilateration or multilateration process. The approach is heuristic by combining game theory and geometric methods to obtain boundary anchor nodes for prospective coalition members. The simulation results indicated that the number of dead nodes could be delayed by about 1,000 rounds if there are improvements in clustering localization with game theory. The experimental results also show that network performance tended to increase after this cluster-based localization process, indicating an increase in the number of data packets sent and the longer lifetime of the sensor node. The simulation results validated a 20% increase in data packets sent.

This work was supported by a doctoral dissertation research grant from the Ministry of Research, Technology, and Higher Education (Kemristekdikti) PDUPT 2019 with contract number 255 2854.