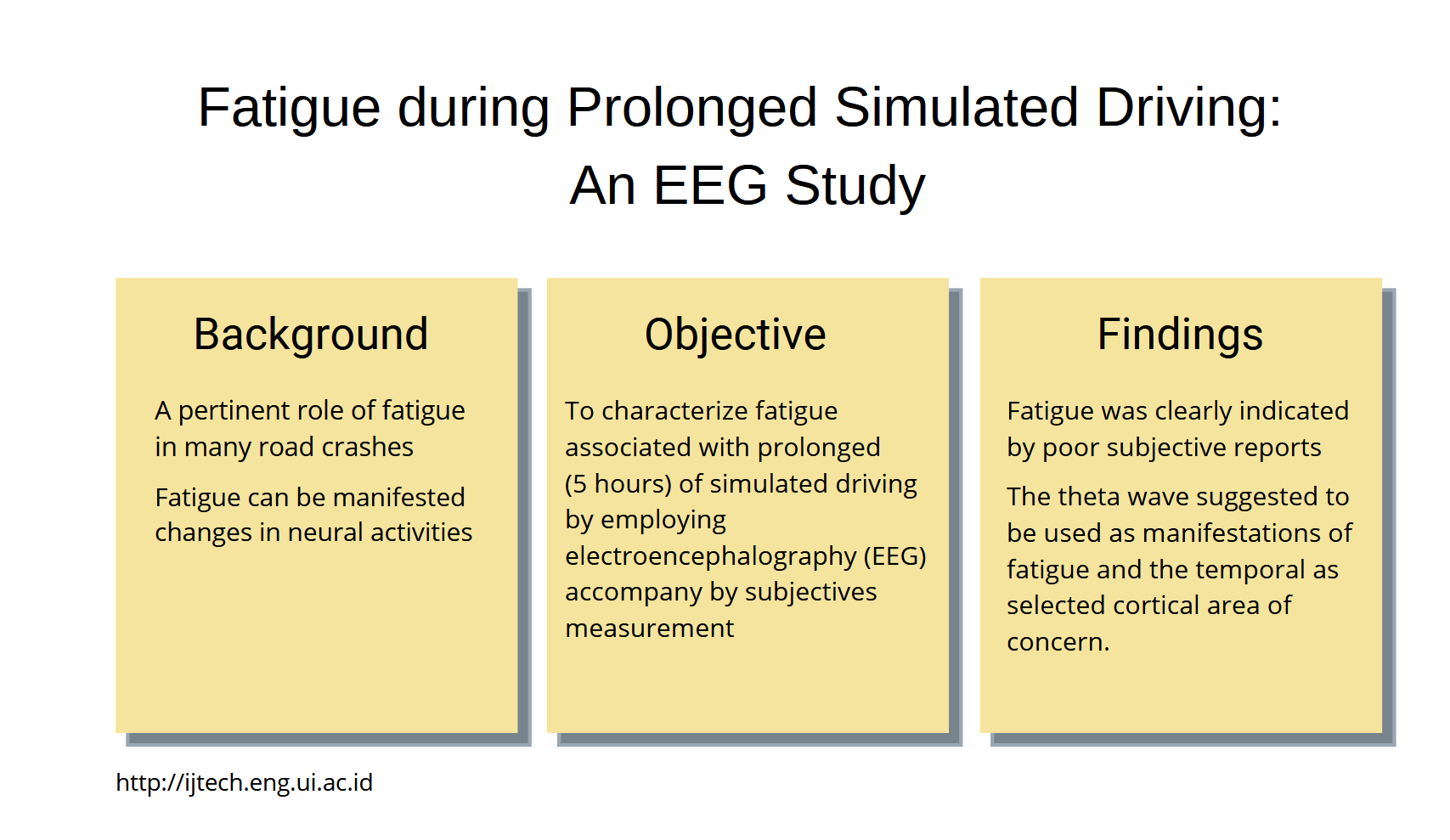 Fatigue resulting from driving has been the subject of interest in many studies, particularly due to its pertinent role in road traffic crashes. Fatigue can be evaluated by certain indicators, such as changes in neural activity. The objective of this study was to characterize fatigue associated with prolonged simulated driving by employing electroencephalography. Fourteen male participants were recruited and asked to drive a simulator for five hours in the morning. All participants had two resting conditions the night prior to the experiment (sufficient sleep or partial sleep deprivation). Subjective responses clearly demonstrated an increase in fatigue as a function of driving duration. Data from brain wave activities, however, did not present clear, consistent changes as fatigue progressed. These findings suggest that theta waves can be used as manifestations of fatigue and temporal waves as the selected cortical area of concern.

Road traffic accidents are a growing issue that has received greater attention among key stakeholders in Indonesia. The government has acknowledged this issue by establishing a National Road Safety Plan 2011-2035 (RUNK, 2011). Staggering statistics show that roughly four individuals are killed per hour due to road accidents (Indonesian Central Statistics Agency, 2019). More than 100,000 cases of road crashes were reported annually between 2016 and 2018, resulting in a total of about 91,400 deaths in those three years. Nearly 70% of the victims were within the productive age group, while productivity loss was estimated to amount to more than 3% of the Indonesian’ national GDP. Human aspects are believed to be a significant contributing factor to these accidents, with driver fatigue cited as a recurrent issue in many crashes involving motorized vehicles.

The relationship between fatigue and road accidents has been addressed in the literature (see, e.g., Dawson et al., 2018; Wedagama & Wishart, 2018; Williamson et al., 2011), but how fatigue progresses throughout a task remains an interesting challenge. Fatigue is a construct that is relatively easy to perceive, but a widely accepted operational definition of fatigue is probably far more difficult to establish (Phillips, 2015). Williamson et al. (2011) defined fatigue as “a biological drive for recuperative rest,” implying the need for rests (from whatever tasks) as signs of fatigue. These researchers further noted that fatigue is caused by three different factors: sleep homeostasis, the circadian clock, and the nature of the tasks.

The relationship between fatigue and road accidents has been addressed in the literature (see, e.g., Dawson et al., 2018; Wedagama & Wishart, 2018; Williamson et al., 2011), but how fatigue progresses throughout a task remains an interesting challenge. Fatigue is a construct that is relatively easy to perceive, but a widely accepted operational definition of fatigue is probably far more difficult to establish (Phillips, 2015). Williamson et al. (2011) defined fatigue as “a biological drive for recuperative rest,” implying the need for rests (from whatever tasks) as signs of fatigue. These researchers further noted that fatigue is caused by three different factors: sleep homeostasis, the circadian clock, and the nature of the tasks.

May and Baldwin (2009) proposed that fatigue can be classified as either task-related or sleep-related. Since fatigue can be viewed as a feeling of ‘tiredness’ experienced by an individual, subjective methods have been employed in measuring the manifestations of fatigue (Ahsberg et al., 2000; Kar et al., 2010; Powell et al., 2011). Fatigue can also be described by looking at performance decrements during a task, although Phillips (2015) stated concerns about the consistency of such measures across different task contexts. It can be summarized that fatigue measurement is related to at least three aspects: physiological, objective, and subjective. The physiological aspects are those related to the body, muscles, central nervous system, hormones, and blood condition (Philips, 2015), while the objective aspects are those related to performance decrement and subjective factors related to how a person perceives the fatigue situation (Toomingas et al., 2012). The use of physiological changes, including electrooculography (EOG), electroencephalography (EEG), and ocular indicators, to characterize fatigue has gained more attention in the past decade.

Often labeled as the gold standard, EEG has been used in many investigations to understand the progressions of fatigue associated with prolonged driving (Craig et al., 2012; Jap et al., 2009; Ma et al., 2018; Wang et al., 2018). A report by Jap et al. (2009) described the various EEG parameters used to characterize fatigue, including the EEG waves (d, q, a, or b) and their corresponding power ratio parameters. Note that additional issues need to be carefully considered, such as which cortical areas should be the source of signal collection, the number of channels used to acquire the signals, experimental settings (laboratory vs. field), and the kind of task factors manipulated in the study. Jap et al. (2011) suggested the use of EEG ratios (particularly a/b and (q+a)/(a+b)) from the temporal area, while Hu (2017) recommended EEG waves obtained from the central parietal area of the brain. Except for the investigation by Wang et al. (2018), most of these studies were conducted in laboratory settings. The number of electrodes varied from a couple of channels to up to 32 channels. A variety of task factors influencing fatigue have been examined in the literature, including driving duration, the quantity and quality of sleep obtained before the experiment, time of day, whether the task involves monotony, and a host of other task factors (Gharagozlou et al., 2015; Kee et al., 2010; Perrier et al., 2016).

It is worth noting that there has been equivocal consensus on how the EEG parameters should behave as a function of time on task (driving duration) or differences in task factors. Perrier et al. (2016) demonstrated fairly consistent increasing–decreasing trends of EEG power across the frontal, central, and parieto-occipital areas. The patterns, however, did not indicate linear changes in EEG power as the driving task progressed. Their work further showed the utility of EEG power in distinguishing sleep-deprived participants from those who received an adequate amount of sleep. Craig et al. (2012) investigated which EEG signals were recorded and analyzed from different brain regions during fatiguing driving tasks. Their study demonstrated marked differences in EEG, particularly in the alpha and theta waves. Although manifestations of fatigue by subjective and ocular measures are typically evident in many studies, changes in driving performance and (particularly) EEG have often been less clear.

This study aimed to examine changes in EEG signals during prolonged (5-hour) simulated driving activity. The objective was motivated by the fact that a driving duration of more than 4 hours is a fairly common phenomenon, experienced by bus drivers, taxis, and travel vehicle drivers in Indonesia (Belia & Handayani, 2020; Prastuti & Martiana, 2017). Driving durations of more than 3–4 hours have been continuously observed among commercial drivers in Indonesia (Puspasari et al., 2017). The majority of previous investigations typically studied driving tasks that lasted for less than 3 hours (Craig et al., 2012; Wang et al., 2018; Bose et al., 2020). Moreover, previous reports have generally demonstrated mixed findings concerning patterns of EEG changes during short-duration driving. It is of interest to determine whether changes in EEG signals are consistent throughout longer driving durations. Lastly, only a handful of studies have examined EEG signals recorded from several brain regions and have simultaneously employed more EEG parameters. We expect this study to provide a more complete understanding of brain activities during long-duration driving. Valuable information could be derived and utilized from our results, particularly within the context of fatigue management strategies, which could ultimately help alleviate road traffic crashes.

This study aimed to characterize fatigue during prolonged driving using an electroencephalography (EEG) perspective. We hypothesized that fatigue resulting from driving tasks could be manifested by well-defined changes in brain wave activities. Although apparent changes in subjective measures indicated fatigue and drowsiness, brain wave activities tended to be mixed. The signals varied considerably according to the parameters employed and the cortical areas from which the signals were obtained. Thus, we recommend that, although many have labeled EEG as the golden standard in evaluating fatigue, interpreting fatigue from EEG-based data should be done with caution. Different driving contexts may result in different patterns of brainwave activities. However, in this study, theta wave changes showed the most promising pattern in detecting fatigue induced by prolonged driving, whereas signals from temporal and occipital areas could be used for observation. To confirm the study results, further research should address fatigue from prolonged driving in the field instead of merely utilizing laboratory settings.

Hu, J., 2017. Comparison of Different Features and Classifiers for Driver Fatigue Detection Based on a Single EEG Channel. Computational and Mathematical Methods in Medicine, Volume 5109530, pp. 1–9

Phillips, R.O., 2015. A Review of Definitions of Fatigue – And a Step Towards a Whole Definition. Transportation Research Part F: Traffic Psychology and Behaviour, Volume 29, pp. 48–56

Wedagama, D.M., Wishar, D., 2018. The Relationship between Self-reported Traffic Crashes and Driver Behavior in the Road Transportation of Goods and Freight in Bali. International Journal of Technology, Volume 9(3), pp. 558–567