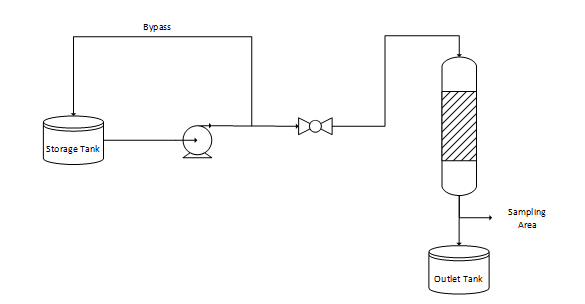 The depletion of fossil energy sources has increased the demand for renewable energy. Bioethanol, which is a type of biofuel, can be used as a gasoline mixture, resulting in cleaner combustion with higher octane values as compared to conventional fuels. For bioethanol to be used as a gasoline mixture, two purification steps are required. Difficulties in the ethanol purification process are caused by the azeotrope condition of the ethanol-water mixture. To remove water from the mixture in azeotropic conditions, advanced technology is necessary. One method for separating ethanol and water that is both economical and effective is the adsorption process. This study observed adsorbent performance during a continuous adsorption process through a fixed bed column with different ethanol influent concentrations. Synthetic zeolites 3A and 4A will be examined as potential adsorbents because they have properties that result in a high adsorption capacity, they are not easily saturated, they have high selectivity, and they are easy to regenerate. This study was carried out under the bed operation condition of atmospheric temperature and pressure (20°C and 1 atm), with a 50% v/v and 10% v/v ethanol inlet concentration, which has a 10 ml/min flow rate. The results of this study are presented with a breakthrough curve, which is used to analyze adsorption performance by determining the highest ethanol effluent concentration, the adsorption capacity, and the effective adsorption time. The zeolite 3A adsorbent, which has a larger surface area and a pore diameter that is closest in size to that of water molecules, was found to have better adsorption performance, resulting in higher ethanol purity, higher adsorption capacity, and a longer saturation time as compared with the adsorption process of zeolite 4A.

Environmental issues and energy security are concerns driving the increasing demand for renewable energy that is environmentally friendly and sustainable. It has been predicted that fossil energy sources will run out within the next 40–50 years (Vohra et al., 2014). The depletion of fossil energy sources could cause a global energy crisis, resulting in the disruption of economic growth. Biofuel is a promising, renewable energy source because of its material availability. One biofuel type that is commonly used to enhance gasoline performance is bioethanol. Bioethanol derived from natural ingredients that are rich in carbohydrates is used as an additive in   gasoline fuels.   It has a high-octane value, so mixing bioethanol and gasoline can improve engine performance.

Producing bioethanol with a high level of purity is difficult because the purification process must be carried out in two stages, and there is an azeotrope state between ethanol and water. Water must be removed from the bioethanol–fuel mixture because it can separate from the fuel due to its density, forming two different layers. There are several technologies that can be used to increase the purity of bioethanol, including advanced distillation, pervaporation, and adsorption (Frolkova and Raeva, 2009). Advanced distillation technology uses additional chemicals to break down the azeotropic state between water and ethanol, while pervaporation technology uses a membrane to separate ethanol and water. A study comparing various ethanol dehydration methods found adsorption technology to be attractive due to its low energy demand for separation, its operational stability, and its high productivity (Sudibandriyo et al., 2015). Currently, adsorption is one of the technologies that is widely used in both the initial and final stages of purification. Adsorption is a separation process in which certain components of a fluid phase are transferred to the surface of a solid adsorbent. Continuous adsorption is a process in which adsorbate is poured continuously onto a bed (porous material) until the solid is nearly saturated and the desired separation can no longer be achieved (McCabe et al., 1993). Continuous adsorption on porous materials, when compared with other ethanol dehydration methods, was found to be attractive for its low energy demand for separation, its operational stability, and its relatively low operating cost (Sudibandriyo et al., 2015).

There are several kinds of adsorbents that are commonly used in adsorption processes; zeolite is one adsorbent that is typically used to separate ethanol-water mixtures. Zeolites are aluminosilicate crystals from groups IA and IIA (sodium, potassium, magnesium, and calcium), with a tetrahedral structure that provides cavities that can be occupied by cations and water molecules and allows for reversible cation exchange and dehydration. In general, zeolites consist of three components: interchangeable cations, alumina silicate framework, and water content. Zeolite is often used as an adsorbent because it has a high adsorption capacity, is not easily saturated, has high selectivity, and is easy to regenerate (Laksmono et al., 2018). Synthetic zeolite is developed in laboratories to meet the specifications and structure required to be a molecular sieve. The pores on the surface of synthetic zeolite are uniform in size, which facilitates an effective adsorption process. There are various types of zeolites that can be distinguished by the crystal structure of their aluminosilicate. Not all zeolites have the ability to adsorb water; it depends on their Si/Al ratio and the type of cation contained in their aluminosilicate bond (Kulprathipanja, 2010). Based on the research, zeolites with a lower Si/Al ratio tend to be hydrophilic, while zeolites with a higher Si/Al ratio tend to be hydrophobic (Kusrini et al., 2019). The Si/Al ratios in zeolites that have hydrophilic properties ranges from low to medium. The type of cation contained in the zeolites affects the water adsorption, where zeolites with monovalent cations, such as sodium and potassium, have better potential to attract water than zeolites that contain bivalent cations (Yamamoto et al., 2012). Zeolite selectivity for water is influenced by pore diameter and surface area.

Based on the literature exploring the potential of adsorption technology and the effectiveness of zeolite as an adsorbent to separate ethanol–water mixtures, this study will examine the effect of various zeolite types on adsorption effectiveness using a breakthrough curve to determine the highest ethanol effluent purity, the adsorption capacity, and the effective time. The breakthrough curve is used to model the continuous adsorption process by observing changes in concentration over time. From this curve, we can determine the difference in adsorbent performance under several operating conditions, with differences in the adsorbate concentration, flow rate, column dimension, amount of adsorbent, and temperature (Chen et al., 2012). Experiments will be conducted using the continuous bed adsorption column, where the adsorbate and adsorbent will be brought into contact such that that adsorbent can adsorb optimally until it reaches its saturated state. By applying the continuous adsorption process, the results of this study will be more applicable to real-life situations since continuous adsorption can be used to purified large amount of bioethanol.

The separation of the ethanol–water mixture was conducted using a continuous fixed bed with the 3A and 4A variations of synthetic zeolite as adsorbents. The ethanol–water mixture flowed into the bed at a 10 ml/min flowrate with influent concentration variations of 50% v/v and 10% v/v. Samples of the ethanol effluent were taken every 15 minutes for 300 minutes to determine the concentrations, which were plotted on a breakthrough curve that is expressed in Co/Ci as a function of time.

The breakthrough curve illustrated that the adsorption process with a lower initial ethanol concentration (10% v/v) had a higher degree of bed utilization, which is indicated by a steeper breakthrough curve. Zeolite 3A, which has a larger surface area, had a longer effective adsorption time (105 and 150 minutes) and a greater adsorption capacity (0.2418 and 0.3598 gr water adsorbed/gr adsorbent) than zeolite 4A. The pore diameter of zeolite 3A is closest to the size of water molecules, so it is more selective for water, which results in a higher ethanol purity (62.41% v/v and 33.27% v/v) as compared to the ethanol purity achieved with zeolite 4A (60.41% v/v and 29.89% v/v).

To develop adsorption technology for separating ethanol–water mixtures, further studies investigating the operation conditions that influence the adsorption process, such as temperature, bed height, and flow rate, should be carried out. In addition, studies examining adsorbent variations also need to be conducted to find adsorbents with better performance.

This research has been funded by Hibah PUTI Prosiding 2020 Universitas Indonesia, Contract Number NKB-1108/UN2.RST/HKP.05.00/2020. The authors would also like to thank the Sustainable Energy Laboratory DTK UI for its remarkable contribution in providing material and equipment for this research.