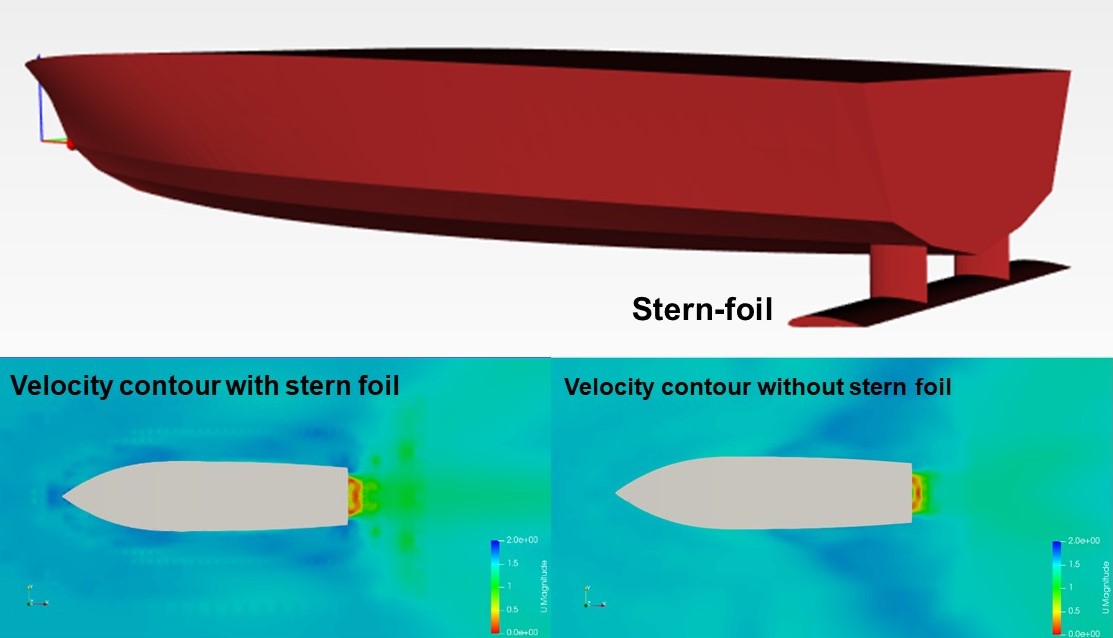 The development of high-speed craft technology for both the commercial sector and the military has grown rapidly in recent times. Optimizing recent inventions is one step toward realizing advanced ship technology. An element that affects efficiency is the effect on the hydrodynamics of the ship by the addition of a stern foil. A stern foil is an underwater hydrofoil that is mounted on the back of a ship to produce lift and additional thrust when the ship is in motion, impacting the trim and wet surface area of the ship and thus reducing drag. This study aims to determine the effect of the angle of attack configuration of a stern foil experimenting with a one-meter ship model at varying angles of attack: 0°, 1°, 2°, and 5°, using the computational fluid dynamic method. The results of this study indicate that the use of a specific stern foil configuration is effective in reducing the drag of the ship by 9%–26% in the Froude number range 0.5–0.75.

The development of advanced ship technology is facilitated by optimizing recent inventions to achieve higher efficiency and superior performance. An element that affects efficiency is the hydrodynamics of the ship. To achieve a fuel-economic ship, an analysis is performed  to improve hull efficiency by modifying the front or aft of the monohull. If the hull is modified from a monohull into a catamaran, it increases the payload capacity but simultaneously increases the resistance by almost four times (Samuel et al., 2015). The application of a hydrofoil is one of the solutions to this. The hydrofoil has been extensively used in the maritime world as stabilizers on commercial ships and submarines and maneuvers. A stern foil is an underwater hydrofoil that is installed aft of the ship to generate lift and additional thrust when the ship is in motion, impacting the trim and wet surface area of the ship. At relatively high speeds, a stern foil can reduce the total drag on the ship. This technology was invented by Van Oossanen in 1992 and was patented in 2002 (Uithof et al., 2016a). A hull vane reduces drag more effectively than other appendixes (by up to 32.4%), and it effectively reduces pitch motion and wave resistance (Uithof et al., 2016b).

Several  researchers  have  investigated  the  effect  on  ship  resistance  of varying the number of foils and the position of the foil on the hull vane, with results indicating that a 50% T position variation reduces resistance by 20.135%, with heaving reduced by 33%, and pitching by 33% (Nugroho et al., 2017). There is a study that demonstrates that a single-foil hull vane ship model with a foil position of 2% LWL behind the ship and 60% T is the optimal model for reducing total drag to 27.278%. However, for a ship in motion, the optimal heaving and pitching values ??for a single-foil hull vane ship model are 4% LWL behind the ship and 60% T, yielding a reduction of 8.86% in the heaving value and 6.44% in the pitching value (Assidiq et al., 2017). On a hydrofoil ship with a trimaran hull moving at a service speed of 20 knots and 30 knots, the optimal angle of attack is 30° and 20°, respectively. At a service speed of 40 knots, the ship would have reached a stall condition where it has lost its lift (Suryadi and Arief, 2016). Another study shows that crew ships using stern foil have superior response amplitude operator (RAO) heave and RAO pitch motion characteristics than ships without stern foils (Suastika et al., 2016). In experiments and simulations, at optimal load (half of the full load condition) and Fr 1.1, a reduction in resistance of 22.3% and 23.3% is obtained with the application of a stern foil. Furthermore, with variations to the stern foil configuration (0° to the x-axis) in a simulation, the reduction in resistance was found to be 26.7% and occurred at Fr 0.9 (Budiyanto et al., 2020b). The most effective hull vane depth with a 2° angle of attack is at 100% T (Afriansyah et al., 2019). A hull vane effectively reduces fuel consumption by up to 12.5% ??when LOA = L + LHv  and has been shown to reduce annual fuel expenditure (Hagemeister et al., 2017). The hull vane also effectively damps ship motion (Bouckaert et al., 2016)

Compared to a bare hull, using a surface piercing hydrofoil reduces the total resistance to 38.53% and conserves 61.5% of the ship's effective horsepower (Azis et al., 2017). A study has demonstrated that aspect ratio, Froude number, and CL/CD affect the stall phenomenon on hydrofoil application (Dewi, 2017). The relation between the hydrofoil position and the center of gravity of the ship also affects the extent of the reduction in the resistance of the ship because the moment occurs when the ship is flying (Slamet and Suastika, 2012). Using a swept fully submerged foil is also effective for reducing the resistance of the ship (Agustian et al., 2017). Using a winged air induction pipe (WAIP) consisting of an angled hydrofoil effectively reduces drag by about 10% compared to a non-hydrofoil plate (Yanuar et al., 2020).

Based on these research findings, the focus of this research is to determine the effect of variations in the angle of attack of a stern foil on high-speed craft by comparing the Froude number and ship resistance. This study investigates the effect of the application of a stern foil in a high-speed craft using the computational fluid dynamics method. The results of the simulation are compared with those of previous experiments to find the total ship resistance in each stern foil configuration and to determine the optimal condition of the stern foil via variations in the angle of attack and speed of the ship, represented by the Froude number. The contribution of this study is its usefulness for determining the effect of the angle of attack of the stern foil on ship resistance and as a basis for consideration in the simulation stage of similar cases.

Simulations using the CFD method in CFDSOF were performed on patrol boats using stern foil with various angles of attack at several speeds. Based on research data and analysis, it can be concluded that simulations using the CFD method can be performed using CFDSOF software to calculate the amount of resistance on a ship and predict other results such as lift, velocity contours, and wave patterns at high speeds or varied angles of attack of the same setup. The setup starts with a grid independence test that determines the number of meshes to be ±350,000. To achieve that number of meshes, using the ship geometry, stern foil, refinement box, and water box, the refinement parameter used on the ship is five, and seven for the stern foil. The simulation is then set to multiphase, with SST k-? as the turbulence model. The boundary condition on x negative is an inlet; x positive is an outlet; y positive, y negative, and z negative are symmetry; z positive is the far field boundary. In this study, a ship with a 2° stern foil configuration operating at a speed of 1.57 m/s had the most effective had the most effective reduction in drag, which is 26%. In contrast, a ship with a 5° stern foil configuration operating at a speed of 2.3 m/s experienced the least resistance reduction of 9%. However, the use of foil sterns is effective for reducing resistance on ships by 9%–26%.

The author is very grateful to the Research Assignment for the 2020 Fiscal Year, Ministry of Research and Technology Republic of Indonesia/National Research and Innovation Agency (KEMENRISTEK/BRIN) through the Directorate Research and Development (DRPM) Universitas Indonesia. Main contract number: 8/E1/KP.PTNBH/2020, with extension number: 255/PKS/R/UI/2020 and UI contract number: NKB-509/UN2.RST/HKP.05.00/2020.

Afriansyah, S.Y., Budiarto, U., Manik, P., 2019. Analysis of Addition of Hull Vane with NACA 4412 Foil Type to Obstacle and Lifting Force on a 15 Meter Pilot Boat with Variations in Angle of Attack and Depth of Foil using the CFD Method. Jurnal Teknik Perkapalan, Volume 7(1), pp. 1–10

Lubis, B.P.A., Manik, P., Adietya, B.A., 2018. Analysis of the Effect of the Addition of Grothues Spoilers with Geometry Variations in the Shaped of NACA Foil on a 750 DWT Pioneer Ship on Resistance and Ship Wake Value using the CFD Method. Jurnal Teknik Perkapalan, Volume 6(4), pp. 1–10

Nugroho, A.S., Hadi, E.S., Manik, P., 2017. Analysis of the Effect of the Addition of Grothues Spoilers with Geometry Variations in the Shaped of NACA Foil on a 750 DWT Pioneer Ship on Resistance and Ship Wake Value using the CFD Method. Teknik Perkapalan, Volme 5(2), pp. 421–430

Siagian, J., Manik, P., Hadi, E. S., 2018. Analysis of the Effect of the Addition of NACA 64098 Grothues Spoilers with Variations in the Number of Spoilers on the 750 DWT Pioneer Ship on the Barriers and Wake Value of the Ship using the CFD Method. Jurnal Teknik Perkapalan, Volume 6(4), pp. 11–20