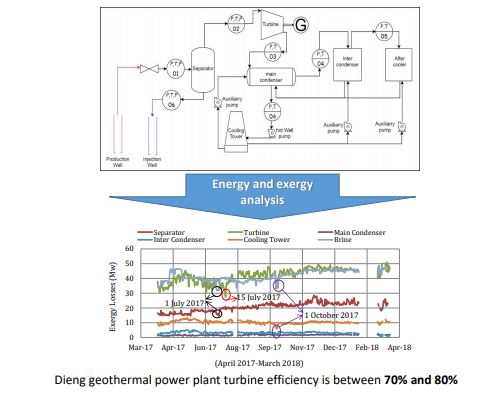 Energy and exergy analyses are conducted at the Dieng Geothermal Power Plant to determine the energy loss of components by calculating the efficiency, rate of change in energy flow, and exergy loss of each component. The data were collected on each component, including production wells, turbines, the main condenser, inter-condensers, and cooling towers, with the data collection occurring from April 2017 to March 2018. Energy and exergy analyses begin by calculating the enthalpy and entropy of both input and output from the compiled temperature data, with the help of a steam table. The study results show that the lowest efficiency was 67% in the turbine, and the highest energy change rate seen was 5.8×104 kW, in the inter-condenser. In addition, the greatest exergy loss was 50 Mw, which occurred in the turbine, indicating it was the component most in need of repair. In summary, the study results clarified that the component that needed to be treated and repaired at the Dieng Geothermal Power Plant was the turbine.

Nasruddin et al. (2018) conducted an exergy analysis and exergoeconomic optimization of the binary cycle system at Well Pad 4 of the Dieng Geothermal Power Plant using a multi-objective genetic algorithm. By applying the optimum parameters, the power plant had minimum values of total energy destruction of 742.4 kW and a total annual cost of 36,723 US dollars.

The organic Rankine cycle (ORC), with isopentane as the operating fluid, and the Kalina cycle, with an ammonia–water mixture, used in the system for power production at the geothermal power plant at Ampallas, West Sulawesi, were investigated by Nasruddin et al. (2020). They reported that the ORC system had the best exergy efficiency, at 82.12%.

Similarly, energy and exergy analyses were conducted by Ulum et al. (2017) at the Mount Salak Geothermal Power Plant’s Unit 1-2-3. They concluded that the largest exergy loss was recorded in the condenser, of around 27.84% of the total exergy of 302.42 MWe. Further, Rudiyanto et al. (2017) conducted an analysis at the Kamojang Geothermal Power Plant and reported that the system had an overall efficiency of 35.86% of the potential 309,000 kW being used. Exergy analysis has also been conducted at the Dieng Geothermal Power Plant by Pambudi et al. (2014). In that analysis, the greatest exergy losses were 13.5% in the separator and 12.94% in the turbine. Using thermodynamic analysis, Pambudi et al. (2015) showed that the performance of the geothermal power plant could be improved by changing from a single-flash system to a double-flash system.

However, a previous study by Pambudi et al. (2014) tended to focus on only four well pads and one month of data collection. In this study, the analysis is conducted for seven well pads, and data were collected for one year, from April 2017 through March 2018. The larger quantity of data used in the analysis process permitted a more thorough review and evaluation of the potential geothermal energy resources with the aim of increasing the total exploited energy in existing areas.

To achieve the study’s goal, energy and exergy analyses were used in the study, and the results can be used to make improvements aimed at reaching the most favorable conditions by determining which components need to be repaired at the Dieng Geothermal Power Plant.

The major change in the energy flow rate at the Dieng Geothermal Power Plant occurred in the condenser, which had the highest value of 5.8×104 kW. This was because the incoming temperature was lower than the outgoing temperature in the inter-condenser. The Dieng Geothermal Power Plant’s turbine efficiency was between 70% and 80%, which is still in the reliable category according to the reference between 60% and 80%. The efficiency of the cooling towers remained good from April 2017 to August 2017, with values above 80%. However, it decreased in September 2017 to 70%. The highest exergy loss that occurred in the turbine was 50 Mw. This was because the incoming steam temperature was still quite high, so the energy content in the turbine was excessive. In conclusion, the Dieng Geothermal Power Plant has to reduce the incoming steam temperature to the turbine in order to reduce the exergy loss. This would result in the power generated by the generator increasing.