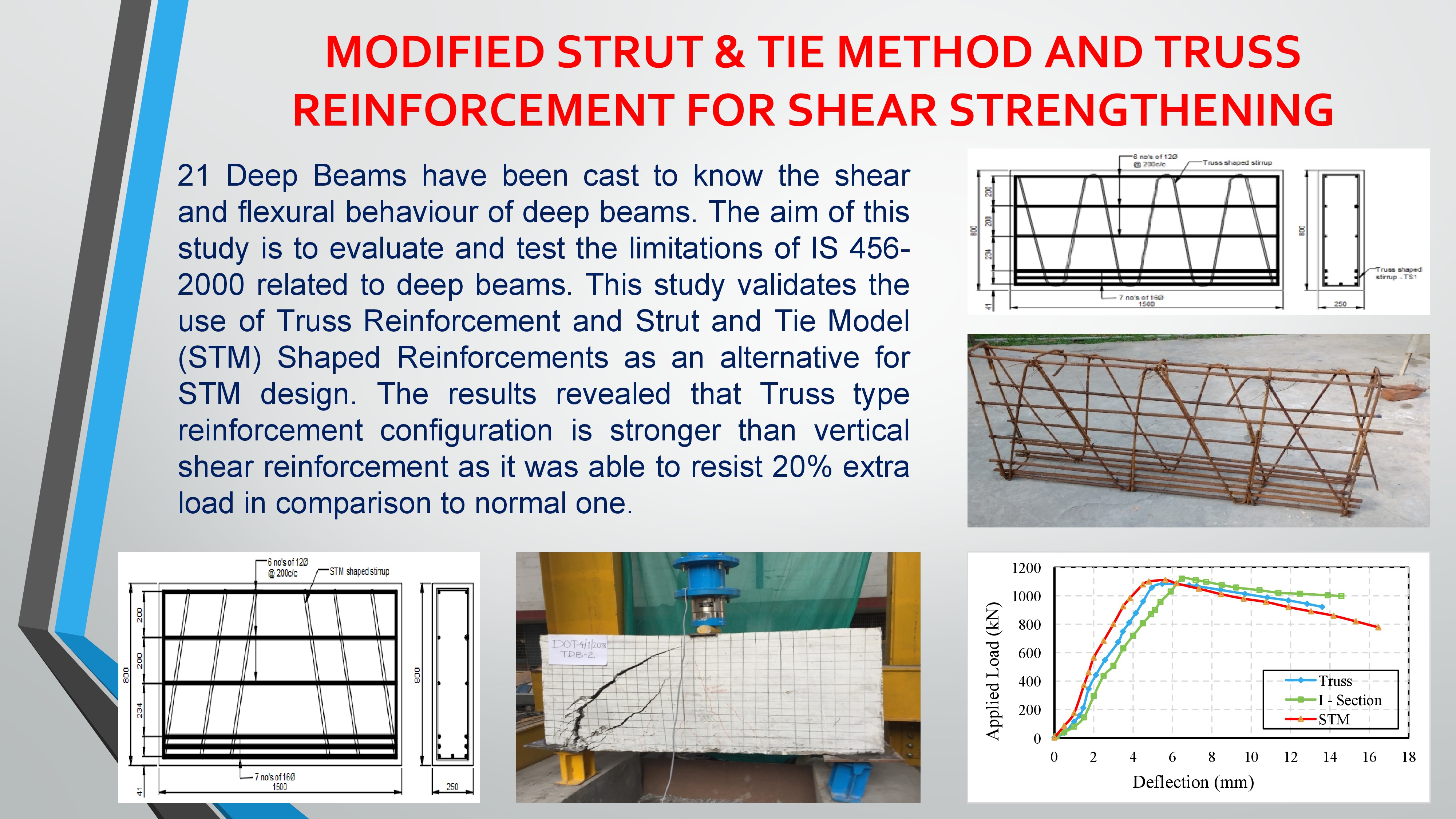 Indian Standard (I.S) (2000) code 456-2000 defines a deep beam as a beam whose length to depth ratio is less than 2.0 for simply supported beams and less than 2.5 for continuous beams. Deep beams are used in a variety of engineering applications, such as bridges covering long spans, open rooms or halls of a building with no intermediate column, a side wall in reinforced concrete water tanks, foundation pile caps, transfer girders used to transfer loads safely if the soil bearing capacity is inadequate, and in bunkers and silos used to store toxic materials. Deep beams have two-dimensional action, unlike normal beams where the assumption plane section continues to be plane after bending is not applicable here. The deformation behavior of the normal beam is similar to that of the deep beam, except that shear plays a key role in the deep beam (Niken et al., 2017).

The factors that decrease catastrophic behavior and deflection are shear span to depth ratio, effective length to depth ratio, concrete compressive strength and vertical and horizontal reinforcement, effective beam depth, web reinforcement, type of loading, support conditions, and crack pattern. An increase in concrete strength leads to a significant increase in the fracture energy value (Siregar, 2017). When the deflection of the beam is less than 2.5 times the thickness, the experimental and analytical curves are about 1% using the average global stresses method (Benbouras et al., 2017). In 1909, (Talbot, 1909) declared that shear stress is a characteristic of the length, longitudinal reinforcement, and stiffness of a beam. He investigated on beams without web reinforcement and found that the shear strength of the concrete should also be considered in the design.

Many theories have been developed to describe shear behavior and the shear capability of beams. Most experimental and field research supports the theoretical studies predicts that a change in applied moment along a beam’s length causes shear force. Studies have also found shear span to depth ratio to have a significant influence on deep beams, with an effective span to depth ratio having a qualitative influence on the failure mode, and diagonal cracking strength was found to have a marginal influence on deep beams(Tan et al., 1996). Aguilar et al. (2002) examined four RC deep beams under monotonic loading to study their behavior and strength. Specimens were designed in accordance with the American Concrete Institute (ACI, 2014) 318-99 code clauses 10.7 and 11.8 and the strut and tie method (STM) of the ACI 318-02 code, as shown in Appendix A. The load-carrying mechanism at failure in beams using STM is intended to minimize the vertical and horizontal reinforcement, however, the ACI 318-99 code’s reinforcement provision no longer replicates the behavior. The percentage loss of flexural capacity of a beam without compressive pressure was found to be higher than that of a beam with compressive pressure when different bending moments were considered (Antonius et al., 2019). Here, the test load obtained was twice that was calculated, leading to the conclusion that the current ACI code must be improved. For a shear span of 1.0 to 2.5, the shear failure of a deep beam beneath single-point or two-point loading is due to the crushing of concrete in a compression zone (Zararis, 2003). Arabzadeh et al. (2011) investigated RC deep beams using two independent resistance measurements  according to ACI 318-05 and   Canadian Standard Association (CSA). These codes appear to be the most accurate and both have low variant and standard deviation. The study found the angle of strut is inversely proportional to the shear span to depth ratio and directly proportional to the horizontal web reinforcement. An exact analysis of concrete deep beams is a complicated problem, and a numerical method of analysis is required to predict the shear strength(Enem et al., 2012). Khan and Ahmed (2013) conducted an experimental evaluation to discover the ultimate shear strength of deep beams using the STM in accordance with ACI 318-05. The study found that Web reinforcement can be used to determine the shear strength of a deep beam. To identify the contribution of the steel to a beam’s failure, a softening coefficient is introduced. Using this method, several conclusions have been drawn, such as an increase in the vertical reinforcement increases the shear strength, ultimate shear stress will increase with an increase in the horizontal shear reinforcement, and the softening coefficient of the concrete decreases with an increase in compressive strength.

Reineck and Todisco (2014)performed shear tests on non-slender beams without stirrups under point load and concluded that STMs are appropriate for RC deep beams at low slenderness ratios. With the increase of shear span, Swami et al. (2015) found a significant reduction in the preliminary cracking and failure, whereas the crack width increased with the increase of load.

Faroque and Kumar (2015) investigated deep beams using the Construction Industry Research and Information Association code, the ACI code, and the IS code. The beams were designed in three lengths, from 4.5 m to 5.5m. The results concluded that IS code was found to offer the maximum reinforcement for all loading conditions and sizes.

Mihaylov et al. (2015) validated the results of 129 published tests of continuous deep beams using the three-degrees-of-freedom kinematic model  and local and global deformations with a number of settlements. Their results were comparable to those using the nonlinear finite element model with thousands of degrees of freedom. de DiosGaray-Moran and Lubell (2016) tested the failure of eight large-scale specimens longitudinally reinforced with deformed A1035 steel bars under stress ranging from 695 MPa to 988 MPa. After the formation of diagonal cracks, the bars without web reinforcement failed in a brittle manner. Bars containing effective shear span to depth ratio, longitudinal reinforcement, and web reinforcement were determined to have more influence on the failure mode. Failure in ductility was more likely to occur with an increase in shear span to depth ratio and a decrease in longitudinal reinforcement.

Yavuz (2016) took a different approach to investigating STM by calculating the shear strength of an RC deep beam with artificial neural networks (ANNs). Using different parameters affecting shear taken from experimental statistics and the literature database, they concluded that the ANN approach is better for predicting shear strength when compared to STM. Ismail et al. (2017) performed an experimental analysis of 24 beams to determine the parameters affecting their shear capacity, such as shear span to depth ratio, web reinforcement ratio, effective beam depth, and compressive strength of concrete, using various international codes, such as ACI 318-14, American Association of State Highway Transport Officials using Load and Resistant Factor Design (AASHTO LRFD), Euro Code 2 (EC2), and Model Code 2010. They concluded that the compressive strength and shear span to depth ratio have more influence than other stress parameters on the shear strength of deep beams. The major failure in deep beams is diagonal cracking failure, and the crack increases with the increase in span to depth ratio. The remaining portions, i.e., uncracked depths, resist the shear stress. The presence of shear reinforcement in the middle region of the shear span will improve the strength of a deep beam (Harsha and Poluraju, 2019). Beams created according to the ACI code have been found to be satisfactory for normal concrete but not for high-strength concrete, and those created according to AASHTO LRFD are less efficient because of the less shear span to depth ratio and those created following the EC2 and the Model Code 2010 are stable overall, but the stability decreases as the concrete strength increases. Many studies have concluded that STM is the best method, as the struts are placed in the path of the shear crack propagation such that the shear effect will be reduced in that region. Since, I.S. has no provisions related to the strut-and-tie design of deep beams, the present study uses vertical web reinforcement area obtained in a normal deep beam design arranged in the form of truss reinforcement to compare it with the regular arrangement of reinforcement.

I would like to acknowledge Dr. P. Poluraju, my research supervisor, for helping in this investigation. I am also grateful to the Koneru Lakshmaiah Education Foundation (KL Deemed to University) for their continuous support and assistance.

Siregar, A.P., 2017. Measuring the Effect of Strengthened Concrete on the Fracture Characteristics of Notched Concrete Beams through a Three-Point Beam Test. International Journal of Technology,Volume 8(4), pp.737–746