Cite this article as:
Kunaifi, K., Reinders, A., Kaharudin, D., Harmanto, A., Mudiarto, K., 2019. A Comparative Performance Analysis of a 1 MW CIS PV System and a 5 kW Crystalline-Si PV System under the Tropical Climate of Indonesia. International Journal of Technology. Volume 10(6), pp. 1082-1092 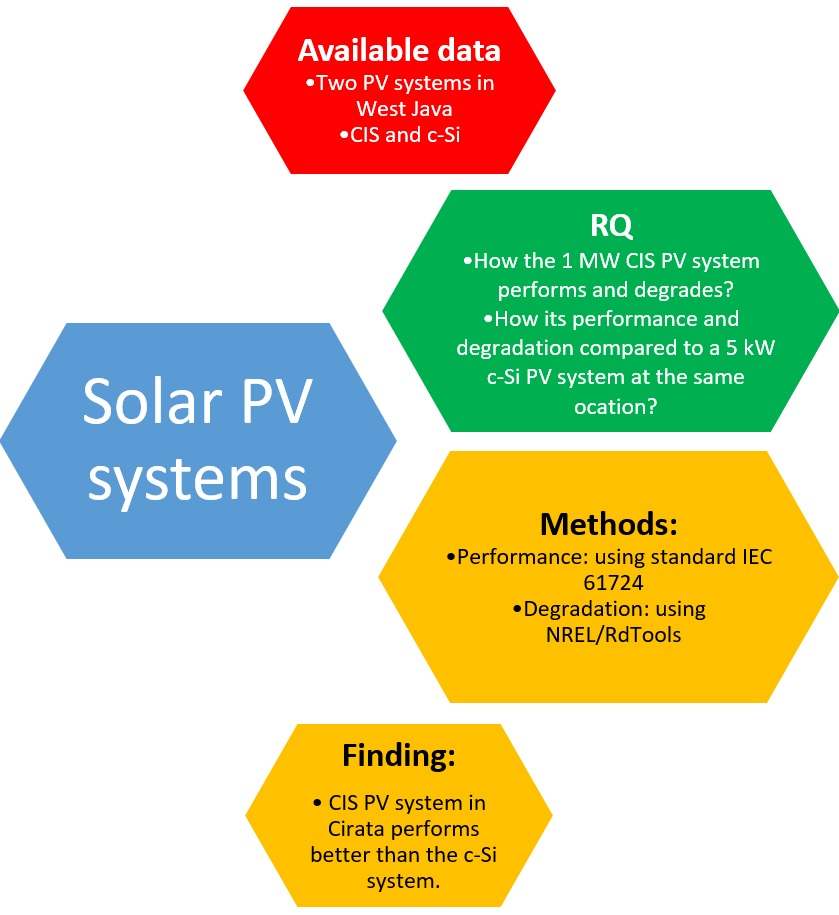 Despite being a tropical country with great potential for solar power, knowledge about the actual performance of photovoltaic (PV) systems in Indonesia remains limited. In this paper, using 5-minute resolution data from 2016 to 2018 obtained from a 1 MW Copper Indium Selenide (CIS) and a 5 kW crystalline silicon (c-Si) PV plant in West Java, we aim to answer the question of how a CIS PV plant performs and degrades in Indonesia’s tropical climate and how it compares to a PV system that contains c-Si technology. The methodological approach used includes performance analyses of these PV systems according to IEC standard 61724 and an investigation of the degradation rate using NREL/RdTools. The following results were derived from the analyses: the total annual Hi was 1500 kWh/m2 or around 4.2 kWh/m2/day. The daily-averaged performance ratio, PR, was 91.7 % ± 4 % and 87.4 % ± 7 % for the CIS system with string inverters and a central inverter, respectively. The mean PR of the CIS systems was 12 % higher than that of the c-Si system, which was 79.8 %. Concerning the final yield, Yf, the CIS system with a mean Yf of 3.85 kWh/kWp outperformed the c-Si system by 14 %. The CIS system degraded by 1.53 % per year, which is less than the c-Si system with a degradation rate (Rd) of 3.72 % per year. From these results, it can be concluded that, in this case, CIS technology performs better than c-Si in Indonesia’s tropical climate. Uncertainties in the calculation and high values of Rd could be areas for further investigation.

Indonesia has many rural areas and remote islands that are suitable for distributed renewable power generation such as solar photovoltaic (PV) systems. PV systems are reliable power systems and play an essential role in climate change mitigation (Creutzig et al., 2017). The market for PV systems is beginning to grow rapidly worldwide owing to, among other factors, their increased efficiency, the increased lifespans of the components, and a rapid reduction in their cost (Fraunhofer ISE, 2019).

The first PV system applications in Indonesia can be traced back to 1978 and the installation of a  5 kWp solar water pumping system (Dasuki et al., 2001). Various other projects then followed, such as a solar home systems (SHS) pilot project (Reinders et al., 1999), desalination plants, basic medical applications, remote televisions, and water pumping systems (Veldhuis & Reinders, 2015). A large SHS demonstration project with a total capacity of 50 MWp was launched in 1994 (Veldhuis & Reinders, 2015), and the first urban PV system was introduced in 2003 (Ministry of Energy and Mineral Resources, 2012).

Since then, many other PV systems have been constructed and created employment (Elfani, 2011). However, it is only relatively recently that Indonesia has gained experience in the performance of PV systems (Kunaifi & Reinders, 2018), and it continues to be in the research and demonstration phase (Veldhuis & Reinders, 2015). To date, Indonesia has 12 utility-scale PV plants in operation, mainly for off-grid or industrial applications. The dominant PV technology applied is typically crystalline silicon (c-Si) technology.

The PV market in Indonesia is emerging and is expected to grow over the coming years across the vast expanse of Indonesia’s archipelago. The factors driving its growth include Indonesia’s unique geography, comprising six large and more than 17 thousand smaller islands. This type of geographical factor presents a challenge in terms of extending the conventional power grid to reach the whole of the country’s population of more than 260 million. The other motivations for solar electrification in Indonesia include, among others, the increasing demand for electricity (around 5.5 % annual growth) and economic growth of 5 % per year.

PV systems are suitable for use on the large islands (urban areas), particularly with respect to increasing the quality of the power supply (Nazir et al., 2016) as Indonesia is characterized by the relatively low reliability of its electricity supply (Kunaifi & Reinders, 2018). Meanwhile, on the smaller islands and in more remote areas, PV systems could play a significant role in providing electricity to local people who have not had it before, replacing fossil-fuel-generated electricity with renewables, and increasing the electrification ratio (PLN, 2018).

It is essential to monitor the operation of a PV system in order to identify performance trends. Monitoring data is also crucial for the localization of potential faults and to enable a comparison of PV system performance against design expectations and guarantees and between the different configurations and locations (The International Electrotechnical Commission, 2017). However, most PV systems in Indonesia are not monitored, with only a few equipped with basic monitoring systems. Accordingly, we have limited knowledge about the actual performance of PV systems operating under real environmental conditions in Indonesia. The two PV systems presented in this paper are among the few that are monitored.

In September 2015, PT. Pembangkitan Jawa-Bali (PJB), a subsidiary of PLN, Indonesia’s state-owned utility company, commenced its entry into the PV business. PJB is a power generation company that operates mainly in Java and Bali, which are the islands with the largest and densest electrical power systems in Indonesia. PJB constructed and now operates and maintains nine power plants with a total capacity of more than 7 GW (PJB, 2019). Among those in operation by PJB is a 1 MW PV system located in the province of West Java, which at the time of its construction was the largest PV system on the island of Java (Figure 1). At the same location, PJB also installed other, smaller PV systems. After three years of operation, we can now, for the first time, analyze the monitoring data from the PV systems in West Java.

In this paper, we therefore seek to answer the following questions:

·      How is PJB’s 1 MW CIS-based thin-film plant performing, and how has it degraded in Indonesia’s tropical climate?

·      How do its performance and degradation compare to that of a 5 kW crystalline (c-Si) plant at the same location?

The motivation for analyzing the performance and degradation of PV systems lies in the fact that the long-term performance and stability of PV plants have a significant impact on the economics of such projects.

PV cells degrade (Meyer & van Dyk, 2004); however, the rate of degradation differs from one PV plant to another. Over the course of a 25-year operating life, a 20 % decline is considered a failure. Assuming linear degradation, an Rd greater than 0.8 % per year can be regarded as a problem (John et al., 2018). For a high-efficiency module, however, 50 % degradation may be acceptable (Jordan & Kurtz, 2013). Using data from outdoor field testing, the long-term behavior and lifetime of PV modules, including their degradation, can be quantified.

Based on monitored Pac, the Rd of the PV systems in Cirata at the module level was high. The CIS system degraded by 1.53 % per year, while the Rd of the c-Si system was 3.72 % per year. However, at the system level, the Rd values were within acceptable boundaries. By considering the other technical performance indicators, it can be concluded that CIS technology performs better than c-Si in Indonesia’s tropical climate. However, there may be some uncertainty with respect to the calculation of the Rd. Such uncertainties are caused by soling and the relatively short two-year monitoring period.

We appreciate the financial support from the Indonesia Endowment Fund for Education (LPDP) and the expert support from Advanced Research on Innovations in Sustainability and Energy (ARISE) of the University of Twente. Thanks to COST Action PEARL PV for the Short Term Scientific Mission (STSM) grant at Eurac Research in Bolzano, Italy.

Kunaifi, K., Reinders, A.H.M.E., 2017. Estimating the Technical Potential of Grid-connected PV Systems in Indonesia: A Comparison of a Method based on Open Access Data with a Method based on GIS. In: 33rd European Photovoltaic Solar Energy Conference and Exhibition. WIP Renewable Energies, Amsterdam, pp. 2652–2658

Kunaifi, Reinders, A., 2018. Perceived and Reported Reliability of the Electricity Supply at Three Urban Locations in Indonesia. Energies, Volume 11(1), pp. 1–24