Title: Normal Concrete Mix Design based on the Isoresponse of Slump as a Function of Specific Surface Area of Aggregate and Cement Paste-Aggregate Ratio
Nabil Dhiya Ulhaq, Relly Andayani

Cite this article as:
Ulhaq, N.D., Andayani, R. 2021. Normal Concrete Mix Design based on the Isoresponse of Slump as a Function of Specific Surface Area of Aggregate and Cement Paste-Aggregate Ratio. International Journal of Technology. Volume 12(3), pp. 495-505 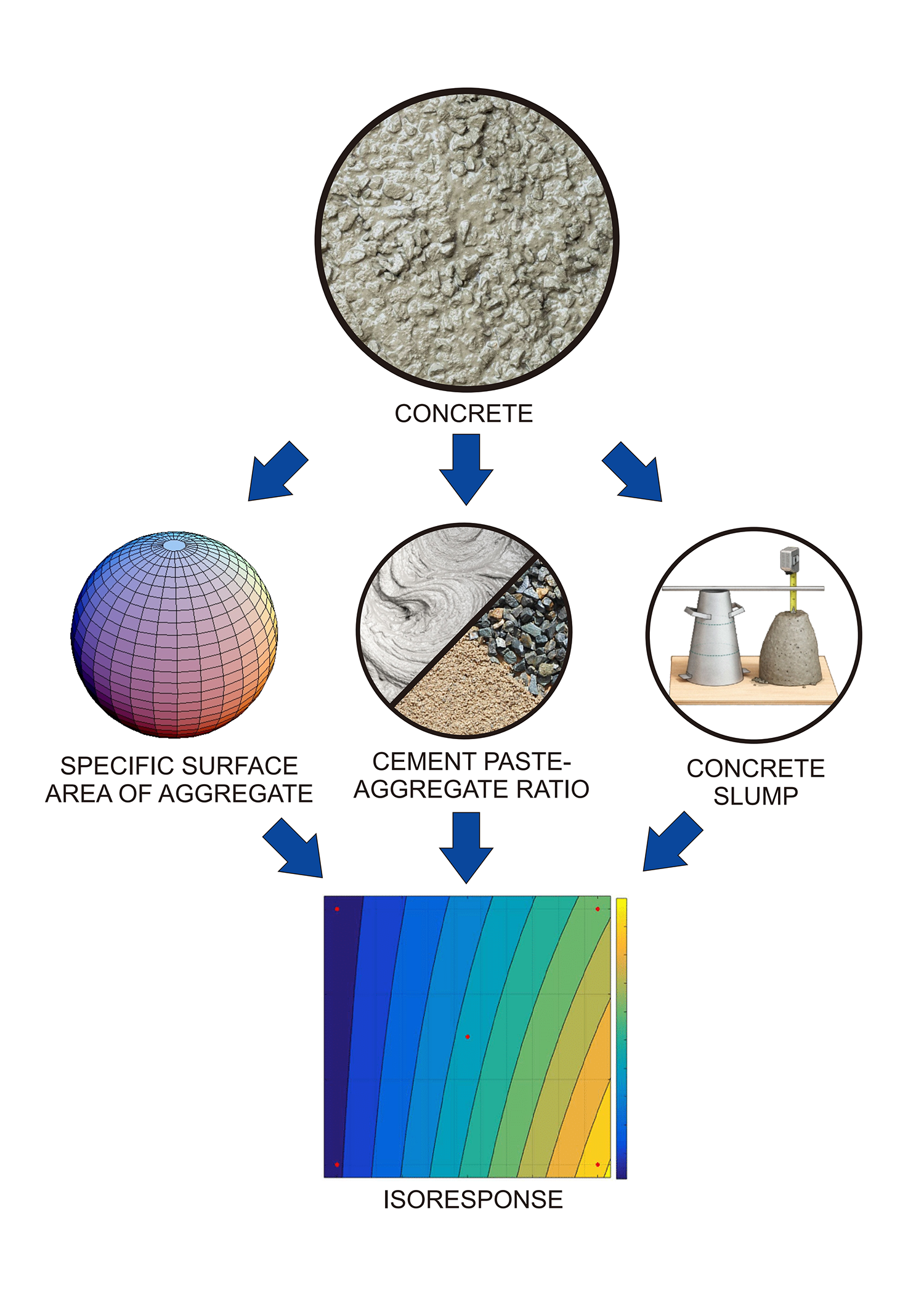 Many methods of normal concrete mix design produce the same proportion of cement and water content of concrete for different specific surface area of aggregate. Therefore, they often produce inappropriate workability of fresh concrete in the first batch. In the end, several trial batch adjustments are required by increasing or decreasing cement paste for reaching the required slump. This research aims to find out the correlation between specific surface area of aggregate and cement paste-aggregate ratio (C/A) to slump in a constant water-cement ratio (W/C) in normal concrete. This correlation will be used as an alternative method of normal concrete mix design. First, the new fine aggregate was established by modifying natural fine aggregate gradation. Then, two reference mixtures with these natural and modified fine aggregates were designed based on SNI 03-2834-2000. From each of these mixtures, the water content was added and reduced at multiple of 10 kg/m3 in a constant water-cement ratio until the measured slumps of samples had approached or reached 6 and 18 cm. Thus, different specific surface area of aggregate, cement paste-aggregate ratio, and slump could be known. Then, an isoresponse is developed to present the correlation between these variables. Finally, other mixtures are designed based on this isoresponse to validate it. The isoresponse is considered satisfactory if the measured slump of the validation mixtures does not deviate more than 2 cm of the required slump. The result shows that the measured slumps of validation mixtures had maximum deviations of 1 cm only. It means that the isoresponse of slump as a function of specific surface area of aggregate and cement paste-aggregate ratio can be used to predict the slump of a mixture and also as an alternative method of normal concrete mix design.

Concrete is a favoured building material due to its ease of production and use (Han et al., 2016). Along with the increasing use of concrete as a building material, concrete improvement was also carried out by researchers in the past few years. One way to improve concrete mixtures is to do experimental research about the possibility of using other concrete constituents as additives or substitutions. For example, Yadav et al. (2018) that have conducted research on high range replacement of normal aggregates with recycled aggregates. Likewise, Eddhie (2017) developed mathematical equations that account for the relationship between the content of nanosilica and the mechanical properties of concrete so it can be applied to any concrete mixture.  The improvement of concrete mixtures can also be done by finding the influence of various variables and their correlation that affect the properties of fresh and hardened concrete.

Amini et al. (2019) have investigated the relationship between paste ingredients for achieving an optimum paste-to-void volume ratio to meet given performance requirements. Curing as a variable that affects the properties of concrete has also been taken to the next level, Nie et al. (2016) explored the internal curing as a way of overcoming the disadvantages associated with heat curing and for improving the performance of heat-cured concrete. Another way to improve concrete mixtures is by developing optimum proportioning of concrete. In this case, the new method of concrete mixtures design can also be developed. Yeh (2007) applied analytical methods by using Computer-Aided Design system to search for the optimum mixture of concrete composition. Moreover, Yong et al. (2018) have developed a new method of high-performance concrete mixture design based on the 4-parameters compressible packing model of Packing Density Theory. Ahmad and Alghamdi (2014) also conducted a statistical analysis of experimental data and developed mathematical polynomials regression to obtain an approach in the optimum proportioning of concrete mixtures. Actually, there is a possibility that there are other ways to improve the concrete mixtures besides those already mentioned. The point is how this concrete mixtures improvement produces concrete that is more satisfying. One factor that shows concrete satisfaction is workability and it can be influenced by many variables such as the specific surface area of aggregate.

In the present study, the effort has been made by changing the value of cement paste-aggregate ratio (C/A) of concrete mixtures. These changes will affect the value of the specific surface area of aggregate and slump of concrete mixtures. Thus, the correlation between specific surface area of aggregate, cement paste-aggregate ratio, and slump can be presented in the form of an isoresponse, or what can be known as a contour plot. Sonebi (2004) has also used isoresponse to present the relationship of several variables in concrete, such as W/C, cement content, slump flow, fluidity loss, compressive strength, et cetera. This is because isoresponse is very easy to present relationships between three or more variables in one form. Finally, from the isoresponse developed in this study, it is expected that the measured slump of a concrete mixture can be predicted. Furthermore, this isoresponse is also expected to be used as a new method of normal concrete mix design.
Conclusion

Based on the experimental results in this study, the following conclusions have been drawn: (1) Indeed there is a correlation between specific surface area of aggregate and cement paste-aggregate ratio to slump which can be presented in an isoresponse. The greater the specific surface area of aggregate, the slump value will be smaller. Otherwise, the greater the cement paste-aggregate ratio, the slump value will be even greater; (2) From that correlation, a new alternative method of mix design has been developed. The advantage of this new alternative method is that a mixture of concrete with specific slump values can be designed. In contrast to the British Standard and Indonesian Standard methods which classify required slump in four ranges, which will complicate when designing concrete mixtures with slump values that are more specific; (3) In addition, a new method for predicting slump values of a concrete mixture also has been developed using that correlation. This method is a new thing because only by looking at the proportion of concrete materials and aggregate gradations, the slump value of the concrete mixture can be predicted without mixing the concrete and testing the slump before; (4) Improvements are still needed on these methods, it is recommended to examine variations in W/C or other variables that can affect slump or other variables that can affect slump.

Hughes, B.P., 1973. The Vebe Test and the Effect of Aggregate and Cement Properties on Concrete Workability. In: Fresh Concrete: Important Properties and Their Measurement: Proceedings of a RILEM Seminar, Leeds, England, 22–24 March 1973, Volume 2, pp. 4.3-1–4.3-12