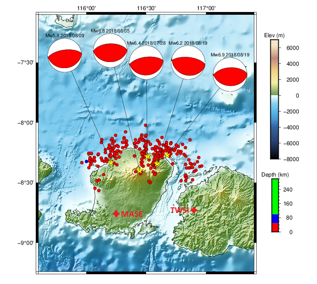 In 2018, Lombok Island was hit by a major earthquake sequence. The Indonesia Meteorological, Climatological, and Geophysics Agency (BMKG) reported that the Lombok Island earthquake sequence started with an Mw 6.4 foreshock, followed by an Mw 6.8 main shock, aftershocks of Mw 5.8 and Mw 6.2, and a second mainshock of Mw 6.9 in the eastern part of Lombok. This study presents an investigation of strong motion characteristics using the Indonesia National Strong Motion Network (INSMN) data from two accelerometer stations, the MASE station (at Praya Lombok International Airport, Lombok Island, Vs30 = 770 m/s, SB site class) and TWSI station (in Sumbawa Island, Vs30 = 1152 m/s, SB site class). Signal analysis techniques using a power spectrum via fast Fourier transform, wavelet transform and horizontal-to-vertical spectral ratio (HVSR) have been applied in this study. There are significant differences in the results (e.g., predominant frequencies, wavelets, H/V ratios, and frequencies at peak H/V ratio) for the MASE and TWSI stations, highlighting the importance of actual Vs30 profiles and the limitation of the site class system in providing necessary predictive information. The variation of the peak ground acceleration (PGA) values and the spectral amplitudes could only be explained by hypothesizing the effect of the volcanic structure of Mount Rinjani on the strong motion waveforms.

The historical seismicity in Lombok shows that Lombok Island is an area of active seismicity. Historical destructive events with M >5 have occurred, e.g., May 30, 1979, M 6.1; January 2, 2004, M 6.2; June 22, 2013, M 5.4; and June 9, 2016, M 6.2. According to the Indonesia Meteorological, Climatological, and Geophysics Agency (BMKG) earthquake database, on July 1, 2018, the Lombok region was hit by an earthquake with a magnitude of 4.5. Then, on July 29 at 05:47:39 local time, Lombok Island was hit by an Mw 6.4 earthquake at a depth of 13 km. This was a destructive earthquake that caused many buildings to collapse and was felt by almost everyone on Lombok Island, significantly impacting the western Lombok area.  The source mechanism identified from the moment tensor indicated a thrust fault mechanism.

BMKG earlier believed that this earthquake was a mainshock, but then on August 5, 2018, an Mw 6.8 earthquake struck Lombok Island. It was followed by a sequence of earthquakes with magnitudes of Mw 5.8 and Mw 6.2, as well as an Mw 6.9 mainshock in the eastern part of Lombok on August 19, 2018. It is noted that these magnitudes have been recalculated and are somewhat different from those stated in earlier publications (e.g., Supendi et al. 2020).

Figure 1 shows the distribution of relocated earthquake epicenters and depths, including the five largest events in the Lombok earthquake sequence. The distribution of aftershocks reflects the back thrust fault model in northern Lombok Island. The aftershocks had a similar mechanism to the first and second mainshocks, as indicated by the model of focal mechanisms in Figure 1. The depths of the earthquakes were consistently shallow.

This study presents an investigation into the characteristics of the strong ground motions of the Lombok earthquake sequence, with mainshocks of Mw 6.8 and Mw 6.9. These characteristics could be related to the potential damage to the buildings and other critical infrastructure on Lombok Island. The aim of the study is to examine the effects of local site characteristics on the strong motions of the Lombok earthquake sequence. The approach taken examines the strong motions recorded at BMKG stations with 1) the same site class and 2) similar distances from the sources. The site class considered is SB with an averaged shear-wave velocity to 30 m depth (Vs30) of 750 m/s to 1500 m/s (e.g., BSN 2019). The parameters considered include peak ground accelerations, energy amplitudes, wavelets, and predominant frequencies. The differences observed would lead to the hypothesis of the effect of Mount Rinjani on strong motions; the mountain is located south of the hypocenters. In this study, two stations were used to examine detailed characteristics of the ground motions. One station is the MASE station located in Lombok International Airport, while the other station is the TWSI station in Taliwang in the western part of Sumbawa Island, east of Lombok Island; the locations of these stations are shown in Figure 1.

A geological map from the Center of Geological Survey of Indonesia reveals that the area around Mount Rinjani is within the Quaternary Period (Qv), and that the other parts of Lombok Island are predominantly within the Tertiary Period (TI). The periods of these locations are shown in Figure 2a.

The frequent earthquakes in Indonesia are related to the convergence of the Pacific, Indo-Australian, and Eurasian plates. The Lombok area is active, as revealed by many seismotectonic studies. Volcano activities have also been frequently observed. Tectonically, Lombok Island is located in the inner arc of the Nusa Tenggara islands, which was formed by the Indo-Australian plate subducting under the Eurasian slab. This subduction is nearly arc–normal, with a dip angle between 60-70o and a crust thickness of about 20 km (Curray et al. 1977). The Wadati-Benioff zone extends to a depth of about 164 km (Rachmat et al. 2016).

Figure 2 (a) Geological map of Lombok Island; (b) Schematic seismic faults for Lombok (modified after PUSGEN, 2017); (c) Vs30 profiles of the MASE and TWSI stations

We conducted a local site investigation using the HVSR method with single microtremor measurements to obtain the predominant periods and the MASW method to obtain Vs30 values for the MASE accelerometer station at Lombok International Airport and the TWSI accelerometer station in Taliwang, Sumbawa Island. Figure 2c shows the profiles of Vs (shear wave velocity) with depth. The weighted average of Vs over the top 30 meters (Vs30) is 770 m/s for the MASE station (Part of the MASW survey was reported in Krisnanto et al. (2018) and 1151 m/s for the TWSI station. Even though the actual Vs profiles are different, both were classified as site class SB (BSN, 2019). Therefore, other parameters are needed to explain the actual different responses when an earthquake occurs.

We examined the strong motions of the Lombok earthquake sequence by considering two stations located in sites of the same site class. The stations have Vs30 values of 770 m/s (MASE) and 1151 m/s (TWSI). Five earthquakes in the sequence were considered. We performed a fast Fourier transform analysis, wavelet analysis, and HVSR analysis. In general, the predominant frequency of strong motions from the MASE station are lower than those from the TWSI station. For the MASE station, the maximum energy of horizontal signals typically occurred at higher frequencies compared to that of the vertical signals, and the time trend for the maximum energy of the horizontal and vertical signals is similar for all earthquakes. For the TWSI station, the maximum wavelet energy of the horizontal signals occurred at lower frequencies compared to that of the vertical signals, and the maximum wavelet energy of the horizontal signals tended to occur at earlier or similar times as that of the vertical signals. Moreover, the H/V ratio for the MASE station tended to be lower than the ratio for the TWSI station. It is highlighted therefore that differences in measured Vs30 can cause different earthquake strong motions and that the site class system might not provide all necessary predictive information. The variation of the peak ground acceleration (PGA) values and the spectral amplitudes could only be partially explained by the theoretical wave geometrical damping. This suggests that there is a major waveform modifier along the paths from the epicenter to both stations; it is hypothesized that the modifier is the volcanic structure of Mount Rinjani, a major geologic feature of Lombok Island.

We would like to gratefully thank the support for this study provided by the Indonesian Agency for Meteorological, Climatological and Geophysics (BMKG), as well as a Kemenristekdikti PTUPT Research Grant (Universitas Indonesia Contract No. 120/SP2H/PTNBH/DRPM/2018).

Pramono, S., Prakoso, W.A., Cummins, P., Rahayu, A., Rudyanto, A., Syukur, F., Sofian, 2017.  Investigation of Subsurface Characteristics by using a Vs30 Parameter and a Combination of the HVSR and SPAC Methods for Microtremor Arrays. International Journal of Technology, Volume 8(6), pp. 983–992