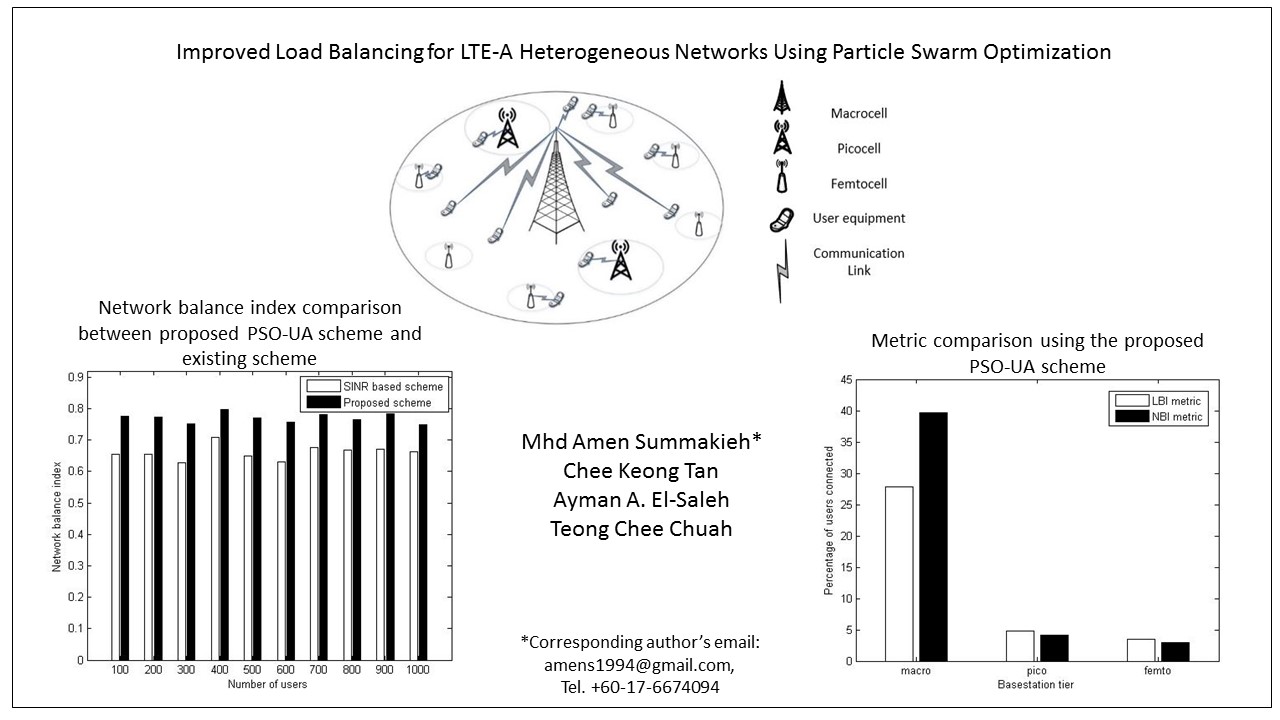 Heterogeneous networks (HetNets) are a promising means of meeting the requirements of Long Term Evolution-Advanced (LTE-A) in terms of data traffic, coverage and capacity. In HetNets, power disparities arise between base stations in different tiers. The use of existing user association schemes will lead to load imbalances between these base stations, thus affecting network performance. Biased user association has been widely studied to improve load balancing in HetNets. Static biasing has been the focus of most existing work but this approach does not yield optimized performance because the optimal biasing values vary with user location. In this paper, we investigate the use of the Particle Swarm Optimization (PSO) algorithm to conduct dynamic user association by finding the optimal bias values. The simulation results demonstrate that the proposed scheme achieves better load balancing performance in terms of the network balance index compared to a baseline scheme.

The introduction of LTE-A HetNets aims to improve spectral efficiency per coverage area (Suryanegara, & Asvial, 2018). Using a mixture of macro and small cells (e.g., micro, pico, and femto cells), HetNets enable flexible and low-cost deployments (Mohamed et al., 2017) while providing a uniform broadband experience to users anywhere in the network (Wang et al., 2011). These small cells can be distinguished from macrocells based on physical size, transmission power, cost and deployment (Ye et al., 2013).   In a HetNet, users need to be associated to a macrocell or a small cell. In 3GPP LTE networks, a user is associated to the base stations (BSs), based on the highest received signal (Sheikhidris et al., 2018). Nonetheless, this association is not practical in an LTE-A HetNet because of the transmission power disparity between the macrocell and the small cells (Corroy et al., 2012). As a result, a small number of users will be connected to the small cells, thus leading to load imbalance between the macrocell and small cells. A technique called cell range extension (CRE), which is a modified user association method has been proposed by 3GPP, whereby a fixed bias value is added to the small cells to attract more users with lower signal strengths to them, hence leading to a higher offload from the macrocells (Borst et al., 2013). Even though the fixed bias value added to the user association process could result in better load balancing, it does not necessarily lead to a lower signal-to-interference-plus-noise ratio (SINR) because of the added interference level (Corroy et al., 2012).

Moreover, a static bias may not improve the user experience; however, in order to avoid excessive sacrifice in the user rates, dynamic biasing is necessary (Chou et al., 2015).  When there are limited resources available at a BS, there will be fewer available resources for certain users, leading to reduced aggregate throughput. For this reason, attaining load balancing among BSs during user association is essential (Boostanimehr & Bhargava, 2015).

In a wireless cellular network, achieving the requirements of different load scenarios with the supplies of the BSs resources is known as load balancing (Feng et al., 2014). When traffic is offloaded from highly loaded BSs to lowly loaded ones, and the load distribution amongst the base stations is reasonable, then load balancing will be achieved. Consequently, better user experience and good network performance will be maintained (Mishra & Mathur, 2014). Different solutions for load balancing have been proposed, which can generally be classified into two types (Zhou et al., 2014). In the first type, the solutions are based on the number of resources used; heavily loaded cells offload extra traffic to other cells nearby by cell breathing techniques (Bejerano & Han, 2009) or by using a specific cell offset (Siomina & Yuan, 2012). Bejerano and Han (2009) presented a cell breathing technique to provide fairness based on finding the global optimal solution. They reduced the size of the congested cells by decreasing the transmission power and hence forcing the users of these cells to shift to less congested adjacent cells. Siomina and Yuan (2012) performed load balancing by optimizing the cell specific offset range of the low power nodes. They aimed to reach a fair load distribution by considering Jain’s fairness index as an objective function.

In the second type, the solutions are based on the number of connected users, including several kinds of utility functions, the overall rate maximization (Ye et al., 2013), alpha optimal user association (Kim et al., 2010) and biasing methods (Cho & Choi, 2013; Tang et al., 2013). Ye et al. (2013) investigated a utility maximization problem considering the overall rate as an objective function and showed that a load-aware association reduces the congestion of heavily loaded macro base stations. Kim et al. (2010) studied load balancing in a wireless network under spatially inhomogeneous traffic distributions. By taking the base station’s load into consideration, Tang et al. (2013) proposed a load-aware model based on stochastic geometry and associated users determined by the strongest average long-term biased received power. Cho and Choi (2013) used repulsive cell activation and showed that the minimum separation distance between the base stations affects the load balancing of the cells. However, the metric used to determine their objective was average user throughput. In order to quantify a metric for load balancing, Chiu and Jain (1989) introduced a balance index to measure the balance of resources in a system (Ganco & Correia, 2015). Limitations were identified for this metric due to the chances that a certain user might generate several added loads based on the BS it is connected to (Ganço & Correia, 2015).

In this paper, we propose a particle swarm optimization-based user association (PSO-UA) scheme for load balancing. PSO is an algorithm that mimics the foraging of a flock of birds or the navigation of fish (Baskoro et al., 2011). It has few parameters that need adjusting and hence is easy to be implemented. PSO shows good performance, together with fast convergence speed and low complexity. Shami et al. (2018) used PSO to control the load with the objective of maximizing the cell’s spectral efficiency, in which a spread control parameter was used to ensure that the number of users assigned to any base station neither exceeded nor went below a specific boundary. In this paper, we propose the use of a load balancing metric proposed by Huang et al. (2017). We show that the proposed PSO-UA leads to a more balanced network compared to the currently used association scheme and that the proposed metric is more suitable for measuring the load balancing of HetNets. The novelty of the current work is a new PSO-based technique for improving the network balancing index via dynamic adjustment of the small cell bias values.

The remainder of the paper is organized as follows: Section 2 describes the system model, presents the problem formulation and the proposed algorithm is discussed. In Section 3, performance evaluation of the proposed technique is presented. Finally, the paper is concluded in Section 4.

In this paper, we have proposed the use of a PSO algorithm to perform a dynamic biasing user association and have chosen the network balancing index as the maximization objective function. The results show that the proposed PSO-UA scheme leads to higher NBI performance compared to the SINR-based UA.

This work was supported by Telekom Malaysia Research and Development, under grant RDTC/160915.