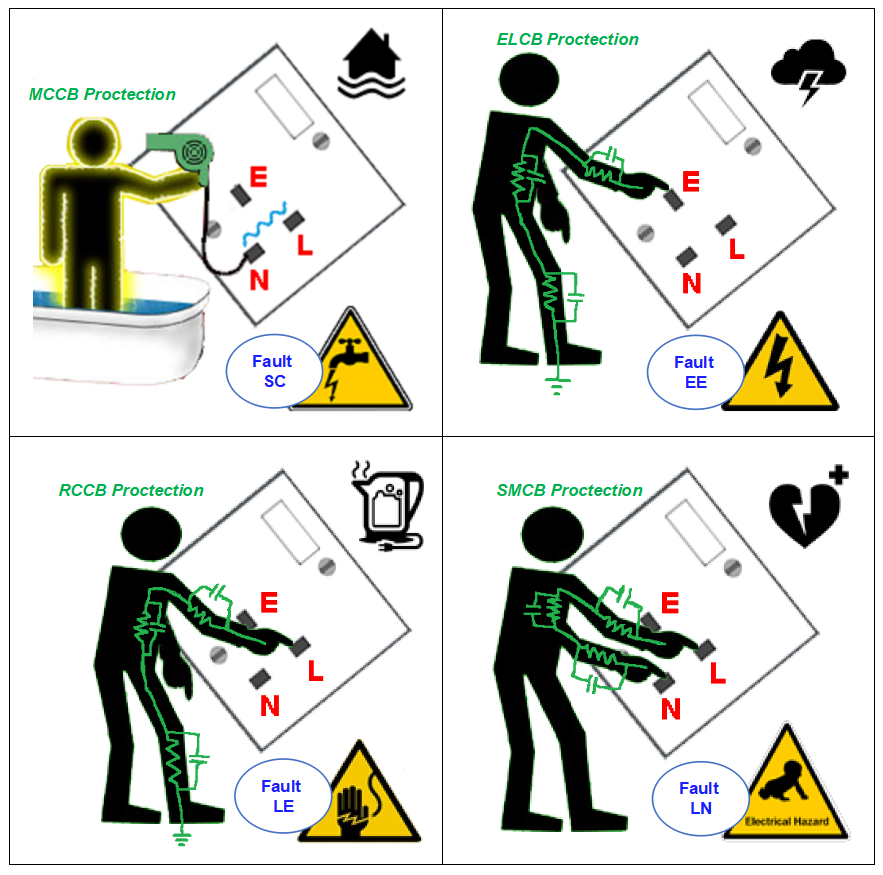 In this paper, we have designed and installed a shock or fault protection system for a single-phase home electrical system using Circuit Breaker (CB) devices available on the market, bearing in mind that certain product areas do not provide shock protection to consumers. Our novel Smart Meter Circuit Breaker (SMCB) is designed to achieve a fail-proof shock protection system architecture that could be incorporated into existing Smart Meters (SM) within a Device Level Load Meter (DLLM).

Finally, this paper shows how our SMCB for an alienated appliance AO detection system for a single-phase home system was simulated, built and tested. The proposed home layout and the Restricted Demand Management System are simple to program and implement and help to reduce energy bills as only particular appliances are allowed to operate at certain times during the day and night. The system also restricts some hazard risk appliances from being used at other outlets. Our proposed system is completely hazard, fault and shockproof for a single phase home electrical system.

The power protection systems in single-phase system homes are not fully hazard proof, and none of the products on the market can ensure full protection from utility hazards. This is apparent from the fact that there are still incidents of fatal injuries and death due to electrical shock or of homes being destroyed by fire due to electrical hazards.

To understand the effect of electric shock, we need to understand the Red Blood Cell (RBC) membrane of human tissue first, as explained in an experimental study by Fricke and Mose in 1925. They discovered the capacitancy and resistivity of the RBC membrane at 50Hz, with an alternating current at 0.81µF/cm 2 and 200 ?cm. Further analysis by Alrawi et al. (2010) shows a human body circuit of a capacitor and resistor connected in parallel and series, as shown in Figure 1. With this data, we simulated and discovered that a leading 30 mA alternating current is required for an average-sized human body to feel an electrical shock. Figure 1 shows our newly classified electrical hazard table for understanding the areas covered by existing protection devices and which electrical hazard classification types do not protect you at home. We named them the Fault SC (Short-Circuit Fault), EE (Earth-Earth Fault), LE (Live-Earth Fault) and LN (Live-Neutral Fault). Fault SC in Figure 1 indicates a fault that short circuits between LN, for example, due to flooding. LN shorting happens when an unearthed electrical appliance has been dipped in water or when rats chew through wires.

This fault is normally protected with a thermal Molded Case Circuit Breaker (MCCB) or thermal fuse devices. Fault EE indicates a fault due to lightning, during which the user could receive an electrical shock if he or she is in contact with the earth wire. This rarely happens, but if it does, the electrical source of the lightning will stop conducting for a few milliseconds, freeing the person from electrical shock. This may be the case if, for example, the person was holding an electric kettle when lightning strikes. This fault can also be protected against with a voltage sensor Earth Leakage Circuit Breaker (ELCB). However, if the earth wire is not properly connected then the ELCB will not initiate. Fault LE happens if the user accidentally touches the live wire or the appliance’s live wire accidentally touches the appliance body or a metal object, resulting in the user receiving an electric shock.

Currently, the new Residual Current Circuit Breaker (RCCB) 30 mA is able to detect this type of fault where the residual current difference between a detected Live and Neutral wire of 30 mA would kick off the RCCB, protecting the user from an electric shock. According to the principles of the RCCB, if a user receives an electric shock when the appliance is working at 500 mA, the live wire will pull the total current of 530 mA, as illustrated in Figure 1, and leakage of 30 mA would pass through the human body to the ground. The Neutral wire would only return an appliance current of 500 mA, creating a difference in the residual current of 30 mA and resulting in the RCCB moving to off position.

Fault LN happens when the user touches both the Live and Neutral wires at the same time. This could happen when infants, children or adults, accidentally touch the socket supply conductivity pins when the power socket was accidentally fitted half way though. This type of fault LN is the most fatal, as the current passes through the heart and stops the heartbeat. No protection device is currently available for this fault. Even RCCB cannot detect this type of fault as both the Live and Neutral lines have the same 30 mA additional current flow. However, our novel Smart Meter Circuit Breaker (SMCB) manages this type of fault.

Currently, available home electrical system architecture does not guarantee shock protection or emphasizes the principles of electrical safety fully. Even-though there is already available some safety equipment in the market it is not used fully utilized by consumers to protect themself from electrical hazards due to reasons of inadequate knowledge or reluctance to spend more money. One type of protection is the use of a 30 mA RCCB in a DLLP architecture system, as we propose in this paper. At the moment, water heaters are the only devices that use this mode of architecture. The 30 mA RCCB at DL can prevent Fault LE shock, but for Fault LN shock there are no CB protection devices available.

To protect against Fault LN shock, we suggest two methods. The first is to use our SMCB where an SM can detect any 30 mA fault, though the disadvantage is that any appliance working below 30 mA cannot be used in the device-level appliance outlet. The second method is to use the existing SONY-RFID-AO demand management system, which can easily be modified and programmed to become a protection system against Fault LN shock, as we have suggested in this paper. We also suggest using our own SMID-AO system, which can detect the appliance ID without the use of RFID and allows any type of appliance, whether colonized or alienated. However, this system is more expensive than our SMCBs. Finally, we have also suggested using a novel Restrictive Demand Management System, which is simpler and could be incorporated into a commonly used Scheduled Demand Management System to reduce utility bills in homes. The disadvantage of this system is that each home with a different layout will require a new priority list table designed for it.

Sony Press Release, 2012. Sony Develops “Authentication Outlet” Where Electricity Use can be Managed and Consumed on a Per-User and Per-Device Basis. Available Online at  https://www.sony.net/SonyInfo/News/Press/201202/12-023E/, Accessed on 14 February 2012

Susanto, E., Idrus, M., Nasruddin, N., Budihardjo, B., 2018. An Experimental Investigation into the Effect of Thermostat Setting on the Energy Consumption of Household Refrigerators. International Journal of Technology, Volume 9(2), pp. 364–371