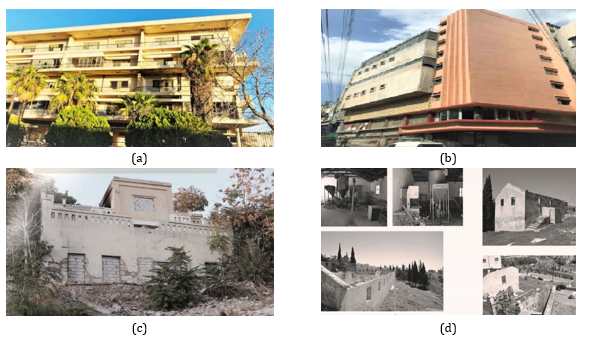 Brownfield regeneration has a positive impact on the quality of life in several dimensions, which enhances the livability and vitality of a city. On the contrary, Amman suffered from intensification of abandoned, derelict sites in the city center, along with severe deficiencies in terms of database and regeneration policy. Therefore, this research study aims to develop a flexible strategy for brownfield regeneration to encourage efforts toward implementation. This initially started by exploring all the brownfield sites in Amman in general and then those located in dynamic, vibrant locations in specific. Four case studies were selected, which included abandoned buildings within an urban setting. Spatial analysis was performed on case studies, including basic descriptive analysis, contextual analysis, and strength, weakness, opportunities, and threats analysis, which helped recognize the opportunities and challenges associated with different sites. The strategies were discussed further by several experts through the Delphi technique, where data were collected from relevant stakeholders to highlight the brownfield regeneration terminology in terms of definition, familiarity, opportunities and risks, governmental role, and policy availability, along with recommendations to improve the practice. Finally, several strategies were developed on the basis of collaboration between stakeholders. These strategies are hard to be generalized to all sites in different regions, as each one has specific issues that need to be considered. Therefore, further studies need to be conducted to validate the results of this study, foster the implementation of brownfield regeneration, and promote sustainable development by reducing urban sprawl and encouraging compactness.

Introduction
Deindustrialization and financial crisis have resulted in the creation of abandoned, derelict, vacant, idle, or underutilized sites called ‘‘brownfield’’ sites (Alker et al., 2000; American Planning Association, 2005). Several institutions have attempted to develop a strategy to regenerate these sites because of their significance, along with opportunities to avert any negative impact. This can be seen clearly in developed countries where many relevant issues have been addressed in terms of managing resources, controlling urban sprawl, reducing public health risk, renewing urban cores, retaining existing jobs, and counteracting social stigma, which facilitates the development of brownfield regeneration policy (Kurtovi?a et al., 2014; Bardos et al., 2016). However, none was achieved in Jordan, except for a few fragmented projects initiated by private institutions or owners. More than 150 sites are spread  throughout  the city of  Amman (the capital of Jordan)—ranging from tiny to huge—with various uses, such as industrial, commercial, military, and infrastructure (Yakhlef and Abed, 2019). Therefore, it is necessary to develop a strategy for brownfield regeneration that pursues an ideal intervention.

Currently, there is growing attention toward brownfield regeneration because of consensus on its profits. Several developments have been made throughout the world. In England, the national data show that 77% of the new homes built in 2008 were constructed on brownfield land that helped in limiting the sprawl and containing expansion. Such a strategy helps monitor the reuse of brownfield sites (Doick et al., 2009). Moreover, some countries in Europe have created regional programs with joint funds for land provision and urban renewal. Brownfield sites have been redeveloped into parks, town houses, economic estates, and social and cultural spaces. For example, the Karl-Heine-Kanal project in Leipzig (Germany) involved the redevelopment of an old industrial area. Another example is of Bristol Harbourside, which is made up of 22.7 hectares of previously idle and underutilized warehouses, railway yards, and industrial facilities that have been rehabilitated with a variety of uses (including housing, official, commercial, entertainment, retail, hotel, and parking), which has created about 4,000 new jobs (Perovic and Foli?, 2012; Rosén et al., 2015; Gegic and Husukic, 2017). In general, it can be said that the redevelopment and regeneration of brownfield sites are widely performed because of great opportunities.

Consequently, brownfield regeneration is a holistic, integrated thinking strategy that reflects the interconnection of physical, social, environmental, economic, and institutional dimensions. Moreover, it maintains the harmony and balance of the environmental ecosystem by improving the quality of environment, minimizing the use of greenfield land, and speeding up remediation of existent pollution (Luziani and Paramita, 2018). So, it is necessary to discuss regeneration within the sustainability theme to ensure the attainment and continued satisfaction of human needs for present and future generations in environmentally sensitive, economically viable, institutionally robust, and socially acceptable ways within a particular context (Frantal et al., 2013; Kurtovi?a et al., 2014; Bardos et al., 2016). These benefits could be the result of a well-defined framework and flexible policy on the development of brownfield sites in terms of management and rehabilitation. Keeping this in mind, brownfield sites are not considered a harmful issue that needs to be resolved; rather, they are seen as areas with huge potential and opportunities that can be achieved by bringing long-lasting life back to these sites themselves, their surroundings, and the local community.

Despite the success of brownfield regeneration at the global level, along with the spread of several abandoned sites in downtown Amman, about 100 hectares of abandoned sites are concentrated in old districts of the city, and most are in a dilapidated condition. Still, there have been limited efforts in mapping problems and identifying opportunities, as well as there is a lack of a clear policy that would regulate this kind of development. This is combined with insufficient supporting funds that can initiate a change toward redevelopment. The city center has transformed from a place bustling with life into a lifeless structure with no identity (Meaton and Alnsour, 2012; Yakhlef and Abed, 2019). Keeping this in mind, this research study aims to understand the paradox of brownfield sites in facilitating a framework proposal for rehabilitation strategies using a real-life project or scenarios for case study. We hope this study gets developed into a policy that encourages stakeholders to move toward implementation.

The significance of brownfield regeneration is well understood and has been a key element of urban development. This can be seen through benefits in economic, social, environmental, and institutional dimensions, which are called the “pillars of sustainability.” The economic level includes: (1) being efficient and self-supporting; (2) providing employment opportunities; (3) promoting local economy; (4) encouraging attractive and functional landscapes; and (5) stimulating community prosperity. The social level involves: (1) encouraging social inclusion and cohesion; (2) promoting well-being; and (3) ensuring easy access to public facilities. The environmental level involves: (1) increasing the use of recycled resources; (2) protecting biodiversity and natural environment; (3) conserving natural and cultural heritage; and (4) combating climate change. Lastly, the institutional level covers: (1) planning processes for stakeholders at the local and regional levels; (2) encouraging citizen participation to bridge the gap between policy-makers and locals; and (3) being a mediator to achieve a balance between public and private interests (Doick et al., 2009; Atkinson et al., 2014; Kristianova et al., 2016; Woodhead, 2018). Such an approach can be seen as a practical problem-solving one, as it provides a balance between the four dimensions that seek to optimize the impact and benefits while preserving the potential of flexibility. Therefore, using sustainability as a guiding theme with brownfield regeneration would be a stepping stone to inclusive development.

In spite of the aforementioned rationality of a sustainable approach, brownfield regeneration faces a major challenge in terms of funds because of the huge amount it requires, which heavily affects the budget along with investment risk. Therefore, there is a need to instigate innovative financial paths, with the aim of encouraging private-sector participation in brownfield projects by leveraging a combination of public resource funds and private assets. In this context, four models of finance have been proposed, which are as follows: (1) public–private partnerships that depend on close cooperation between public and private partners; (2) land value finance that is designed to recover the capital cost of urban investment by capturing some, or all, of the increments in land value resulting from the investment; (3) urban development funds that integrate brownfield redevelopment into funds themselves by revolving the obtained funds; and (4) impact investment funds that are socially responsible investments taking the form of balanced investment over a range of projects (Berawi et al., 2018; Yakhlef, 2020). Selection of appropriate options required a full understanding by all stakeholders about the relationship between investment and real estate market to establish partnerships. On the basis of this, it is important to explore the context of brownfield regeneration in terms of feasibility and implementation opportunities, which would provide a better response to urban needs.

Brownfield sites are classified into three types on the basis of economic profit: (1) Viable sites are the ones where the private market works toward regeneration without public-sector funding because there are greater advantages than risks. These sites are mainly located in dense, economically dynamic locations. (2) Marginally nonviable sites are the ones that cannot be redeveloped without public-sector funding because of high remediation cost. (3) Nonviable sites offer limited economic possibilities because of their adverse location, which requires substantial public-sector funding. In this regard, the feasibility of brownfield regeneration is connected with the contamination level and spatial location of these sites. Regeneration would be effective for sites with medium or low contamination levels because of the less cost involved. Also, the location would be more viable if sites are situated in dynamic locations that have an active role in the community. Such sites would have more positive views and stand better chances of being regenerated (Frantal et al., 2013; Martinát et al., 2015). Therefore, this study focuses on dynamic locations that have significant cultural heritage with diverse land use and density attributes.

Amman is the capital and largest city of Jordan that was initially established over seven hills and then expanded to include 19 more hills, combining 22 districts with a total area of approximately 700 km2 (Al-Rawashdeh and Saleh, 2006; Jordan Department of Statistics, 2016). Amman is under the administration of Greater Amman Municipality (GAM) that has attempted to combine the British model in terms of city planning and the American model in terms of downzoning. This combination is being applied under the local Jordanian conditions of a poor economy, centralization, and lack of participation, along with rapid urbanization, leading to chaos and disorder in the city. Moreover, brownfield regeneration is not part of local policy or planning legislation. So, Amman has no official framework for renewal strategy (Meaton and Alnsour, 2012).

Amman has several patches containing abandoned sites of various uses in general and city center in specific. This was emphasized by Yakhlef and Abed (2019), who discussed the typologies of brownfield sites in terms of size, use, occupancy level, and physical condition. Fortunately, most of these sites have no real or perceived contamination problems because of their original use; therefore, they should be seen as viable sites in terms of feasibility and profitability. At the same time, Amman has several brownfield sites in vibrant locations that are in proximity to the city center or a major transportation axis. However, only one project was rehabilitated, called “Hanger and the New Ras al Ain Art Gallery,” which is located in downtown. It was constructed as an electricity company in 1938, and then it was closed and abandoned. In 2007, a partnership of Jabal Amman Residents Association and Greater Amman Municipality proposed the regeneration of Hangar as industrial heritage into a contemporary public space and special flea market, as shown in Figures 1a and 1b. Currently, Hanger can be considered a vital place that hosts many activities.