Enhancement of Drinking Water Treatment by Combined Filtration-ICPS: Integrated, Based on EEMS, DOC, UV260 and Removal of Pathogenic Bacteria

Enhancement of Drinking Water Treatment by Combined Filtration-ICPS: Integrated, Based on EEMS, DOC, UV260 and Removal of Pathogenic Bacteria 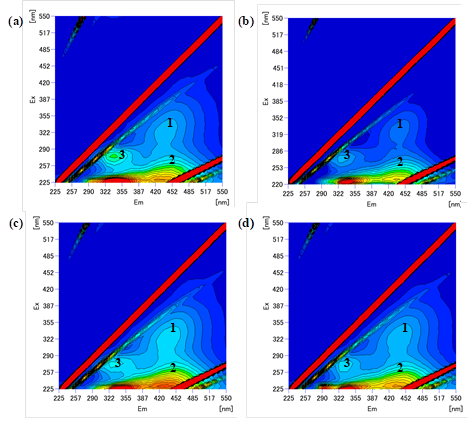 The impact of natural organic matter (NOM) and pathogenic bacteria in water are of great concern in water treatment due to their effect on human health. In this study, the ability to combine filtration with an inductively coupled plasma system (ICPS) to remove natural organic matter and pathogenic bacteria from water was investigated. UV260 adsorption, dissolved organic carbon (DOC) and excitation-emission matrices (EEMs) were used to evaluate the removal of NOM by the filtration-ICPS combination. The system was operated at two different flow rates, 100 and 150 ml/minute.  Decreasing trend revealed for UV260 and DOC with the higher flow rate. Tryptophan-like substances generally found in water were taken as a measure of microbial activity. This preliminary research shows that the average removal efficiencies for fecal coliforms, total coliforms and salmonella were highest at a flow rate of 100 ml/minute. It can be concluded that the combined filtration-ICPS method is capable of removing NOM and pathogenic bacteria from water.

Naturally occurring natural organic matter (NOM) and dissolved organic matter (DOM) refer to complex and diversified mixtures of organic compounds that arise from the microbial degradation of biomolecules (Bougdah et al., 2017). DOM occurs as a consequence of the contact between water and its precursors, such as dead and living plants, animals, microorganisms and their decomposition products that are present in the hydrological cycle (Bridgeman et al., 2011). A third to over half of the DOM in natural surface waters comprises humic substances; these are organic compounds that are microbially (by bacteria and algae) and terrestrially derived from soil humus.

DOM from wastewater effluent and/or sewage treatment plants is a source of dissolved organic matter in water environments.  Humic substances are dominated by hydrocarbon bonds, causinglipophilic interactions. This is a significant concern in drinking water treatment due to aesthetic, operational and economic factors. The presence of humic acids will discolor the water, making it brown or black (Ahmad et al., 2017). They also unfavorably decrease the effectiveness of oxidants and disinfectants, and produce troublesome disinfection byproducts during oxidation (Juretic et al., 2015). They can contribute to biogrowth in the water distribution system and affect the performance of drinking water treatment systems which use membrane filtration and granular activated carbon (Özdemur, 2014).

The emergence of pathogenic bacteria in drinking water is a common cause of outbreaks of disease. In 2010, WHO revealed that over 2.6 billion people lacked access to clean water, contributing to around 2.2 million deaths annually (Pandey et al., 2014). In many countries, chlorine compounds are generally used as disinfectants to kill bacteria in water treatment plants. Nevertheless, potential harm to humans can still arise due to the presence of DOM in water, which encourages the production of disinfection byproducts (DBPs) when reacting with chlorine in drinking water. DBPs include haloacetic acids (HAAs), trihalomethanes (THMs), haloacetonitriles (HANs), iodo-THMs, haloketones (HKs) and nitroamines (Wu et al., 2013). The primary source of THMs is natural organic matter. DBPs that form as a result of the chlorination of NOM are probable carcinogens to humans and aquatic life forms (Hanigan et al., 2017) and can have other serious and chronic effects on human health. Thus, the removal of pathogenic bacteria and NOM is an important aspect in the production of safe drinking water.

Recently, the inductively coupled plasma system (ICPS) has been revealed to be a functional, low-energy and environmentally efficient tool for pathogenic bacteria disinfection, as well as for natural organic matter degradation in water. As a source of energetic charged particles, high electric fields, UV light and even shockwaves, plasma can trigger the production of OH- in water (Foster, 2017). This generates radical species (H+, O-2, and OH-) and radical molecules, such as ozone (O3) and peroxide (H2O2), with high oxidation potential that can be used to remove microorganisms.

Desmiarti et al. (2015) investigated the removal of pathogenic bacteria from different water sources (river, groundwater and spring water) by ICPS, using three different reactor sizes (diameters of 1, 2 and 3 inches) and three different applied frequencies (3, 3.3 and 3.7 MHz) in batch experiments. It was found that increasing the applied frequency in addition to decreasing the plasma reactor diameter led to a reduction in the death yield of pathogenic bacteria. It was also reported that the removal efficiency of total coliforms was 86, 91 and 100% for river water, groundwater and spring water respectively, after 20 minutes of treatment using an applied frequency of 3.7 MHz and a 2-inch plasma reactor.

Another pathogenic bacterium in water is Salmonella typhi (S. typhi). As explained by Levatensi et al. (2012), S. typhi can be categorized as a food-borne bacterium that spreads through drinking or tap water and can cause intestinal illnesses such as paratyphoid fever and typhoid. These are known to be cause of human deaths in Indonesia, with more than 100 cases per population of 100,000 reported (Amicizia et al., 2017). The removal of S. typhi by an ICPS system has been studied using continuous flow experiments (Desmiarti et al., 2017). It was found that its removal strongly depends on the flow rate. On the other hand, the disinfection efficiency of S. typhi and the death rate constant decreased from 75% to 48% and from 0.57/h to 0.33/h respectively, with an increase in the initial number of S. typhi bacteria. Compared to the flow rate, the initial number of S. typhi bacteria had only a slight effect on energy consumption and death yield; energy consumption fell from 0.28 to 0.07 KWh/l, while the death yield increased from 784 to 1889 CFU/KWh, with an increase in flow rate from 5 to 20 ml/minute. It was concluded that flow rate is the key parameter in predicting the disinfection rate of pathogenic bacteria in drinking water treatment.

Desmiarti et al. (2018a, 2018b) have also investigated the influence of flow rate on removal efficiency (RE), death yield and the death rate of bacteria when using an inductively coupled plasma system. Energy consumption was also calculated in their studies. Water was taken from Kuranji River in Padang, West Sumatra, Indonesia and the applied radio frequency was 4.6 MHz. After 30 minutes of treatment, the disinfection efficiency of total coliforms, other coliforms and fecal coliforms increased to 44, 54 and 73%, respectively. Disinfection efficiency increased to 74, 89 and 100% with respect to total coliforms, other coliforms and fecal coliforms respectively, after treatment was run for 60 minutes. Compared to flow rate, the frequency applied in the ICPS had a less significant effect on the efficiency of the disinfection of pathogenic bacteria.

Regarding the degradation of organic matter by means of ICPS, little has been reported. Therefore, this research aims to investigate the application of a combination of microfiltration and ICPS to remove DOM and pathogenic bacteria from river water as a drinking water resource. The most significant chromophoric fraction is proteinaceous material related to extracellular microbial products and plant litter degradation products, such as fluorescent amino acids, tryptophan and tyrosine. These amino acid-like fluorophores form at lower emission wavelength ranges than typically observed for humic fluorophores. More chemical information can be obtained from the fluorescent classes of natural organic substances present in DOM by knowing the wavelength ranges at which the molecules both absorb and emit light than by absorbance information. For this reason, the observation of ubiquitous fluorescent organic substances in water samples through fluorescence spectroscopy has been proven to be a powerful technique for investigating the source and chemical composition of DOM. Hence, the characteristics of the DOM were measured based on three-dimensional excitation emission matrix fluorescence spectroscopy (3D-EEMs). Total DOM as dissolved organic carbon (DOC) and the ultraviolet absorbance with wavelength 260 nm (UV260) were investigated to analyze the content of the natural organic compounds in the treated water. The disinfection efficiencies of salmonella, total coliforms and fecal coliforms were also revealed.

A combined filtration-ICPS was studied to remove pathogenic bacteria, as well as natural organic matter from river water. The disinfection efficiencies of fecal coliforms, total coliforms and Salmonella typhi fell with an increase in flow rate, suggesting that this is an important parameter. The combined filtration-inductively coupled plasma system was also found to be sufficiently proficient to remove organic matter constituents, as suggested by the UV260 absorbance and DOC measurements. Furthermore, the 3D-EEMs results suggest that removal of tryptophan-like substances from raw water occurred, indicating the removal of pathogenic bacteria. Thus, the combined filtration-inductively coupled plasma system was found to be a prospective advanced technology in drinking water treatment, capable of simultaneous organic and microbial removal by filtration and degradation mechanisms.

We are grateful to the Ministry of Research, Technology and Higher Education, Republic of Indonesia, who supported this work with research contract number 001, research contract K10/KM/2018. The authors are also thankful to the Water Quality Laboratory and the River Basin Research Center, Gifu University, Japan.