Hydrothermal and Solvothermal Synthesis of Cerium-Zirconium Oxides for Catalyst Applications

Hydrothermal and Solvothermal Synthesis of Cerium-Zirconium Oxides for Catalyst Applications 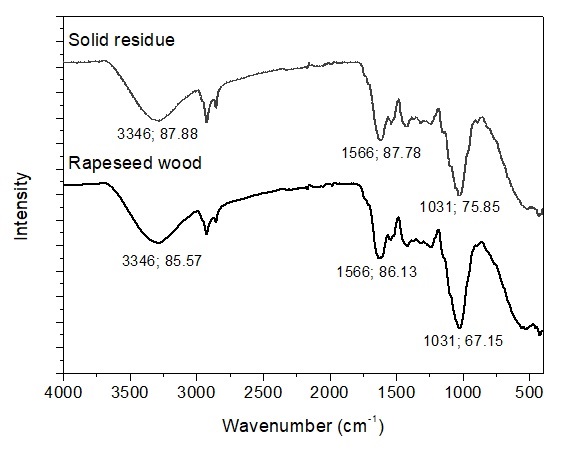 Cerium oxide (CeO2) is a rare earth metal oxide that has high oxygen storage capacity at low temperature. In order to enhance this capacity, as well as its thermal stability, it is necessary to combine CeO2 with zirconium oxide (ZrO2). This work focuses on the synthesis of cerium-zirconium oxides by hydrothermal and solvothermal treatment at low temperature to obtain ones suitable for catalyst applications. The possibility of the application of ceria-zirconia oxide to the delignification reaction was investigated. The experiments were conducted at a constant pressure of 5 MPa, constant temperature of 150oC, and constant synthesis time of 2 h, in an autoclave reactor made of SUS 316 with an internal volume of 100 mL. Precursor was prepared from Ce(NO3)3 and ZrO(NO3)2 at 0.06 M concentration, dissolved in various solvents. The solvents used were water, water/ethanol (70:30 vol/vol), and water/ethylene glycol (70:30 vol/vol). After hydrothermal and solvothermal synthesis, the colloid products were dried at 60oC for 6 h and then calcined at 500oC for 6 h. The characterizations of the particle products were analyzed using SEM and XRD. Furthermore, these products were used for the hydrothermal delignification process of wood biomass. The addition of ceria-zirconia particles dramatically increased the percentage of lignin removal from rapeseed wood up to 97.58%. Based on the results, ceria-zirconia oxide particles are effective for the pre-treatment of wood biomass in bio-refinery applications. Moreover, ceria-zirconia oxides may reduce the use of chemical compounds in the delignification process.

Cerium oxide has a beneficial redox property, and therefore it is applied in reactions in many industries and at the lab scale as an eco-friendly redox catalyst; for example, in hydrogen production, water gas shift reactions, and automotive exhaust gas conversion. Recently, investigations have been conducted into the application of cerium oxide as an adsorbent for CO2 capture (Kusrini et al., 2018). Many catalytic reactions have employed cerium oxide at lower operating temperatures compared to other oxides, especially in reactions with oxygen as a reactant, due to its redox nature (Kwon et al., 2011). It is established that cerium has the capacity to change between two oxidation states, +3 and +4 that characterizes its redox property. Cerium keeps the oxygen in  reserve in  aerobic conditions and discharges it in anaerobic conditions in order to gratify its stoichiometry. This characteristic is responsible for the oxygen storage capacity (OSC) property of cerium. However, pure cerium oxide has limitations in OSC and thermal stability due to the effect on its surface area at higher temperatures of the growth of nucleation and crystallites within the cerium pores (Lundberg et al., 2002).

Several attempts have been made to counter the restrictions of pure cerium oxide. Some rare earth metal oxides, such as lanthanum, yttrium, zirconia and silica, have been added to improve the OSC and thermal stability of cerium oxide by raising its pore parameters (Suda et al., 2001). It is well-known that the ionic conductivity of cerium oxide can be increased by the ion doping of the rare earth metal; moreover, cerium oxide catalytic activity can also be elevated by supplying lattice oxygen from the bulk to the surface (Zhou & Gorte, 2008). Generally, cerium contains both Ce4+ and Ce3+ ions, which coexist in its lattice. The tetravalent cerium cation has a lower ionic radius of 0.97 A° than the trivalent, which has a 1.14 A° ionic radius. As a result, the close fluorite framework of the cerium is deformed. The tetravalent cations consolidate into the cerium lattice, the diffusivity capacity of oxygen can be changed, and the ion mobility inside the lattice will also be altered, with the establishment of subsidiary deformations. These deformations can be reduced by the generation of damage solid oxides structurally with smaller size tetravalent cations, such as Zr4+ (Reddy et al., 2007). Further, the combination of cerium with zirconium was formulated and the composite of CeO2-ZrO2 solid oxides exhibited appropriate thermal stability and redox capacity, together with certain characteristic features. The composite of CeO2-ZrO2 solid oxides with various compositions could improve the OSC (Machmudah et al., 2018).

In the last few years, cerium-zirconium oxides have become a key factor in many heterogeneous catalysis applications; moreover, they meet the zero-emission target of automotive exhaust gas. Cerium-zirconium oxides have been investigated in many areas of chemistry, such as the synthesis of butyl acetate from acetic acid and butanol (Yucai, 2006); the oxidation of landfill leachate (Aneggi et al., 2012); its application as a catalyst for the steam reforming of raw bio-ethanol (Palma et al., 2016); and as a catalyst for hydrogen production from methane reformation (Gil-Calvo et al., 2017). Delignification is the removal of lignin from woody tissue by natural enzymatic or chemical processes, such as oxidation reaction (Park et al., 2015). The delignification of biomass is lucrative and important in ethanol production from lignocellulosic biomass. In order to improve the removal of lignin from the biomass, it is necessary to find a simple process with a catalyst to enhance the oxidation reaction. From the literature review, it appears that the application of cerium-zirconium oxides in the delignification process has yet to be reported.

Cerium-zirconium oxides have been synthesized by the sol-gel process at ambient temperature (Rumruangwong & Wongkasemjit, 2006). In this process, various chemicals need to be used for the preparation of the precursor, and a long synthesis time is needed. Numerous methods for cerium oxide synthesis have been reported, such as solution precipitation, thermal decomposition, ball milling, hydrothermal synthesis, solvothermal synthesis, spray pyrolysis, and thermal hydrolysis (Dhall & Self, 2018). As with the sol-gel process, solution precipitation requires various chemicals and needs a long synthesis time. In ball milling, it is difficult to control particle size, while the other methods need high temperatures to form the particles.

The authors acknowledge funding from the Directorate General of Research and Development Strengthening, Ministry of Research, Technology, and Higher Education of the Republic of Indonesia through a PDUPT research grant (contract nos. 616/PKS/ITS/2017 and 925/PKS/ITS/2018).

Dhall, A., Self, W., 2018. Cerium Oxide Nanoparticles: A Brief Review of their Synthesis Methods and Biomedical Applications. Antioxidants, Volume 7(8), pp. 1–13