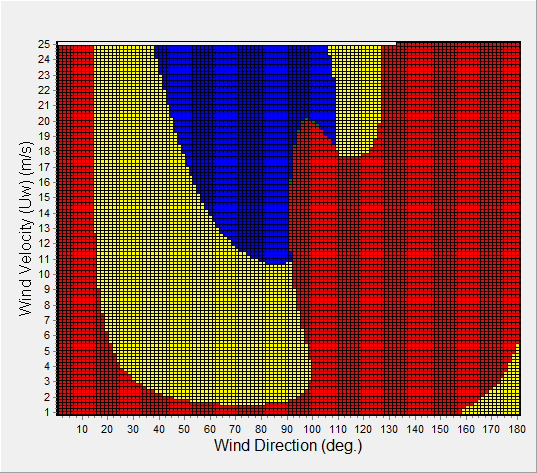 The yaw motion stability and course-keeping ability of ships are important factors with regard to collision danger, particularly for ships operating in narrow channels, crowded routes, or port areas. Yaw motion may become unstable due to external forces, such as wind. To investigate yaw stability and course-keeping ability, this study developed a nonlinear dynamic system of a three-degree-of-freedom mathematical model to determine steady state equilibrium. Yaw motion behavior was then analyzed using the eigenvalue characteristic of the obtained equilibrium points. The numerical results for an Indonesian ro-ro ferry showed that the rudder angle required to maintain the ship’s course tended to increase as wind velocity increased. In beam wind, the necessary rudder angle was larger than the maximum possible rudder angle when the wind velocity was 24 m/s or more. The ship could be controlled by the rudder during operation, but its yaw motion tended to be unstable in following wind. The stable oscillation of yaw motion occurs when the wind velocity is higher than 11 m/s, and the range of heading and rudder angles increases as wind velocity increases.

The maneuvering performance of a ship is indicated by its turning ability, zig-zag maneuverability, course-keeping ability, and stopping ability, which are considered as maneuvering criteria by the International Maritime Organization (IMO; 2002). During the initial design of a ship, its maneuvering performance is evaluated through numerical simulation or free-running model experiments. After a ship is launched, tests are conducted in a sea trial to guarantee the maneuverability of the vessel. External disturbances, such as wind and waves, are not considered in the aforementioned criteria, although some studies have shown that these factors have significant effects on the maneuvering performance of a ship (Paroka et al., 2017; Shigunov, 2018). The rudder angle required to maintain a ship’s course increases if wind velocity and wave height increase. In severe weather, the rudder may not control the ship’s direction because the required rudder angle is larger than the maximum possible rudder angle (Fujiwara et al., 2006).

When a ship operates in a narrow channel, river, or port area, yaw motion stability becomes highly important for the avoidance of collisions during operation. Several studies regarding yaw stability have been conducted. Spyrou (1995) investigated the yaw motion of four different ship types under wind action and found that yaw motion tends to be unstable in following wind and stable in headwind. It was also found that a ship’s direction is significantly influenced by yaw motion stability. In addition, limit cycles of yaw oscillation were identified within a certain range of heading and rudder angles for specified wind velocities and directions. A ship’s heading angle oscillates at constant amplitude under a constant rudder angle. Detailed information regarding the effect of wind on the behavior of yaw motion is necessary to safely and effectively control a ship during operation. For this purpose, Spyrou et al. (2005, 2007) investigated this area in relation to rudder angle. In these studies, Spyrou et al. (2005, 2007) found that limit cycles of oscillation occur at small rudder angles with low wind velocities, but they did not provide any explanations of yaw motion stability at higher wind velocities. Further investigation of yaw behavior under wind action was undertaken by Yasukawa et al. (2012), who specifically studied the effects of wind velocity and wind direction on yaw, including the oscillation of yaw motion. These studies used a three-degree-of-freedom (3-DOF) mathematical model of ship maneuverability under the assumption that the ship’s forward speed does not significantly change due to wind and that the drift motion is small. This method is easy to use because the maneuvering equations can be analytically solved under these assumptions. However, ships with small draught may experience a large amount of drift motion in headwinds, meaning that their forward speed cannot be assumed to be the same as their surge velocity due to significant sway. In addition, the added resistance of the wind may significantly decrease forward speed, especially for small ships with large windage areas.

A ship master should have accurate information regarding alterations in yaw stability according to wind velocity and wind direction relative to their ship. A ship can be controlled by making changes to the rudder angle and propulsion in order to avoid dangerous situations, such as potential collisions (Spyrou et al., 2005). Course-keeping ability failures due to yaw instability depend on wind velocity and direction as well as the geometric characteristics of the windage area (Liu et al., 2018). In high wind velocities, the heading angle cannot be controlled by the rudder, and thus the ship cannot maintain her trajectory (Aung & Umeda, 2018). Indonesian ro-ro ferries have small draught and large windage areas relative to their overall dimensions (Asri et al., 2014), and wind-induced drift could significantly affect their maneuverability with regard to yaw stability and course-keeping ability. Muhammad et al. (2015) used azimuthing podded propulsion to improve the maneuverability of an Indonesian ro-ro ferry, but this was only advantageous for turning maneuvers. Therefore, the effect of wind on yaw motion and the related course-keeping ability is an important factor in the minimization of collision risk during the operation of ro-ro ferries. A numerical simulation incorporating variations in wind velocity and direction is a useful method of verifying the yaw characteristics of a ship in different wind conditions.

This paper discusses the yaw motion characteristics and course-keeping ability of an Indonesian ro-ro ferry under the action of steady wind. In this study, the rudder angles required to maintain the heading angle and the yaw stability were measured at specific wind velocities and directions. This information is important for the avoidance of collision dangers. Therefore, the yaw characteristics obtained in this study can be used as guidance for ship masters to safely operate their ships. This information should also be considered in the development of traffic separation schemes to prevent accidents, as proposed by Sunaryo et al. (2015). Finally, these results may be used for the future design of Indonesian ro-ro ferries.

This paper presents research supported by Hasanuddin University and the Directorate General of Higher Education of Indonesia under grant number 1764/UN4.20/PL.09/2016. The authors wish to express their gratitude to both institutions for their support. The authors also wish to express their sincere gratitude to PT Industri Kapal Indonesia (Persero) for its support in providing the ship data used in this paper.

Aung, M.Z., Umeda, N., 2018. Minimum Propulsion Power Prediction of a Ship under Adverse Weather Conditions with Dynamics of Diesel Engine and Turbocharger Taken into Account. In: Proceedings of the 7th International Maritime Conference on Design for Safety. Kobe, Japan

Spyrou, K.J., Chatzis, A., Tigkas, I., Eleftheriadis, G., 2005. Limits of Controllability of a Ro-Pax in Wind. In: The 16th International Conference on Hydrodynamics in Ship Design. Gdansk-Ostroda, Poland