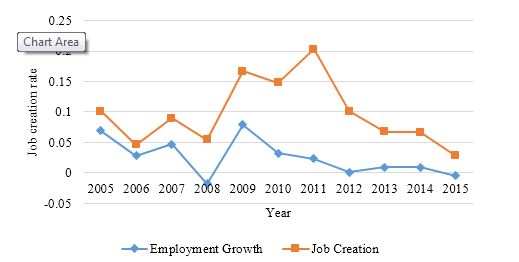 The Malaysian government claims that the implementation of advanced technology in the production process following the Economic Transformation Program (ETP) will create many jobs in the economy. To evaluate this statement, this study calculates the rate of job creation based on the formula developed by Davis and Haltiwanger (1999), plotting and analysing the pattern of job creation in high- and low- technology level sub-sector groups. From the descriptive analysis, both technology groups show distinctive patterns of job creation. Hence, this study provides information to policymakers to enable them to strike a balance between technology and job creation capacity in the manufacturing sector.

Malaysia is a nation that has succeeded in encouraging rapid economic growth since its independence in 1957. It has evolved from being an agricultural and commodity-based economy to one that is industry-based. Currently, the country is undergoing a transformation process with the aim to become one of the top 20 countries in terms of economic development, social progress and innovation at the global level (National SME Development Bank Council, 2016). The introduction of the Economic Transformation Program (ETP) by the sixth Malaysian Prime Minister has encouraged the manufacturing sector, as one of the New Key Economic Areas (NKEAs), to re-structure its production method, from a production- based economy (p-economy) to a knowledge-based one (k-economy). One of the techniques in the knowledge-based production process is the use of technology and innovation. Therefore, the restructuring of the production process is expected to greatly increase production in the manufacturing sector, and also lead to a high level of job creation. As the statistics in the Malaysian Manufacturing Sector Survey Report (2015) show, the total workforce in the manufacturing sector in 2014 was 2,096,197, a figure which is expected to be increase year on year.

Such imprecision in explaning labor market performance also occured in the manufacturing sector in Malaysia. Based on Figure 1, it is found that labor market performance is underestimated if it is measured based on employment growth rather than the measurement of job creation. This situation can have an impact on the effectiveness of policies based on the overall labor market, and especially on the labor force. The use of technology in the production process not only affects employment growth, but job creation is also affected. As described in Schumpeter’s Creative Destruction theory (Schumpeter, 1961), when technology is used in the production process, it will increase high-skill job creation and lead to low-skill job destruction simultaneously. Nonetheless, only a few previous studies have found significant differences in job creation patterns between different levels of technology; these include works by Piva et al. (2005), Coad and Rao (2007) and Bogliacino and Pianta (2010).

Moreover, most of the previous studies only focus on the role of advanced technology in job creation in developed countries such as Germany and Canada. Meanwhile, few recent studies conducted in developing countries such as Malaysia, Indonesia or China have have explored the role of the level of technology in job creation”. Therefore, the core of this study is analysis of the job creation pattern, focusing on the high- and low-technology level sub-sectors in the Malaysian manufacturing sector, with the aim of providing more information of job creation patterns from the perspective of demand for labor.

Historically, the study of the job creation concept can be traced back to Davis and Haltiwanger (1990), and other studies such as those of Albæk and Sørensen (1998), Haltiwanger and Vodopivec (2003) and Hijzen et al. (2010). However, researchers in labor economics often use the term ‘job creation’ to mean the same as ‘employment’. The definition and specific measurement of job creation in the labor economics literature are not clearly stated. The definition and calculation of employment growth is often used in analyzing job creation, whereas employment growth represents the labor supply perspective, while job creation represents the labor demand perspective. To date, this gap has been filled by Davis and Haltiwanger (1990), whose concept of job creation is clearly defined and is accompanied by specific formulas and criteria. However, their study focused on the US manufacturing sector. Subsequently, Van Reenen (1997), Stavrunova (2001) and Kerr et al. (2014) have disputed the concept of employment as workers and jobs as position in firms.

In contrast, the research conducted in Australia by Mitchell et al. (2006) used a calculation of job creation to analyze its pattern in accordance with the economic cycle. The method used to achieve the objective of the study was descriptive analysis. Despite the difference in the measurement of job creation, the findings satisfy the cyclical criteria of the job creation pattern, in line with studies conducted in the US, UK and Canada. The job creation rate in Australia was high during economic expansion, but lower when the economy was declining, as was also found by Garibaldi (1998).

With contrary findings to the case of Slovenia, a study was made by Jackson and Mach (2009) in Poland covering the period of economic transition from 1988 to 1998 . It used the descriptive analysis method to examine the pattern of job creation in terms of magnitude, based on firm ownership, employing the job creation rate calculated by Davis and Haltiwanger (1999) to plot the pattern of job creation. The results show that the magnitude of job creation in Poland at the beginning of the economic transition process was higher than at the end of the process. At the beginning of the transition process, the results show that there was an increase in demand for labor by private firms and state-owned enterprises. This finding is opposite to those of the earlier studies of Estonia and Slovenia.

This research was supported by the Ministry of Higher Education (MoHE) through the Fundamental Research Grant Scheme (FRGS), S/O Code: 13130. We thank our colleagues from the Research and Innovation Management Centre (RIMC), School of Economics, Finance and Banking (SEFB), and Islamic Business School (IBS), Universiti Uatara Malaysia (UUM), who provided insight and expertise that greatly assisted the research, although they may not agree with all of the interpretations/conclusions of the paper.