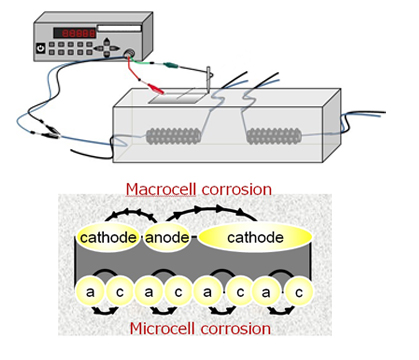 The durability of reinforced concrete has proven to be predominantly influenced by its resistance against the ingress of harmful substances such as chloride ions, carbon dioxide and moisture. The corrosion of steel bars which occurs especially in marine environments is likely to be severe, depending on the availability of oxygen and the moisture consumed by cathodic reactions. This study aims to investigate the effects of bleeding on the corrosion of horizontal steel bars placed in reinforced concrete column specimens. The issue was examined through electro-chemical tests, including half-cell potential, polarization resistance and corrosion current density, conducted using specimens in which corrosion was induced via dry and wet (NaCl 10%) cycles. The presence or absence of copper slag fine aggregate and fly ash replacement was employed as an experimental parameter. The results suggest that the corrosion of horizontal steel bars in the upper part of the column concrete specimens was adversely affected, even in the case of OPC specimens with relatively lower bleeding water. This was attributed to lower resistance against the ingress of corrosive substances, especially in such locations. In the case of fly ash mixtures, resistance to corrosion was significantly improved owing to lower oxygen permeability of less than 1.0×10-11mol/cm²/sec, measured via the cathodic polarization technique. The replacement of fly ash is effective in facilitating more uniform quality in the column specimens due to a lower level of bleeding water and higher resistance to segregation and pozzolanic reactions.

Conventionally, reinforced concrete (RC) structures have been considered to be maintenance-free because of their highly durable. However, in recent years a decrease in the durability of RC structures caused by the corrosion of steel bars has become a major social problem. These structures are widely used for infrastructure such as tunnels and bridges, but their durability is adversely affected by such corrosion when exposed to aggressive environments, such as chloride and acid attack (Wang et al., 2014). Indonesia is an archipelagic state and many provinces are located in the coastal areas of each island. It is inevitable that corrosion of steel bars embedded in concrete occurs, and tends to be caused by chloride ions from the sea environment during the service life. The use of sea sand has also led to the corrosion of steel bars in inland areas. Massive infrastructure development, as one of the realizations of the Nawa Cita (Nine Agendas) throughout the archipelago, such as road and bridge constructions is aimed at making cities in Indonesia more interconnected. The amount of concrete produced has increased in line with the increase in construction work, which could lead to the scarcity of natural resources, such as the sand generally used as fine aggregate. The excavation of sand could have a great affect on the environment. In this regard, an alternative material to replace the main constituent of concrete should be seriously considered. In recent years, the use of industrial by-products such as construction materials has been promoted as a sustainable approach (Shi et al., 2012). For example, the amount of coal ash which produces fly ash (FA) generated from electricity utilities such as coal-fired power plants is about 8.5 million tons in Japan, and around 300,000 tons in Shikoku, according to data published in 2011, and 8.31 million tons in Indonesia in (ESDM, 2019). On the other hand, about 400,000 tons of copper slag is produced annually in Indonesia by the Freeport Company and Newmont Company according to Ministry of Energy and Mineral Resources Republic Indonesia data from 2012, while 2 million tons of copper slag is produced in Japan each year by copper refining in Shikoku (SDAR, 2003).

Much research on the utilization of these materials to produce concrete has been conducted. According to a past study by Nakai et al. (2015), bleeding water tends to increase in fresh concrete mixed with CUS because of its high density of 3.55 g/cm3. On the other hand, it has been suggested that bleeding water could be reduced by the addition of FA, and long-term strength development is expected from the pozzolanic reaction (Choi et al., 2006). Improving the strength and durability of high strength concrete characteristics has been achieved by the use of copper slag as a sand substitute at levels of up to 40–50% (by weight of sand) (Al-Jabri et al., 2011). Moreover, the addition of slag to high-performance concrete can increase its strength and produce an anticorrosion effect through enhanced electrical resistivity and reduced permeability (Hou et al., 2004). Copper slag containing 50% and 65% of slag replacement when exposed to an aggressive environment has a more refined pore structure than normal concrete, and better resistance to deterioration (Bouikni et al., 2009). Therefore, studies on the durability of concrete, especially on the corrosion of steel bars using copper slag and fly ash with partial replacement, have been the focus of increased attention in recent years. The utilization of copper slag and fly ash in concrete as a solution to the environmental problem of the disposal of industrial waste in large quantities, and the sustainable development associated with the preservation of natural resources, could be a viable solution in Indonesia.

The corrosion resistance of steel bars is a very important materials property in relation to the durability of concrete structures (Hornbostel et al., 2013). Chloride-induced corrosion is known to be most severe form, leading to a higher deterioration rate. Chloride attack is mainly caused by the ingress of chloride ions from the outside into concrete cover in marine environments. The passive film is destroyed and the corrosion of steel bars occurs when the chloride ion concentration at the depth of the bars exceeds the threshold, i.e. 1.2 kg/m3 (Alonso et al., 2000). The variation in chloride ion concentrations with respect to depth, i.e. their maximum at a certain depth, especially under dry and wet actions was investigated by Andrade and Chang (2018). Various nondestructive tests have been developed and studied to assess corrosion properties, as it is difficult to directly observe the corrosion processes of steel bars embedded in concrete visually. Electrochemical methods such as the half-cell potential method and the polarization resistance method (Bertolini et al., 2016) are promising because the corrosion of steel bars in concrete takes place through electrochemical reactions consuming water and oxygen (Hansson et al., 2006). When corrosion of steel bars occurs, an anodic reaction in which iron ionizes, and a cathodic reaction in which oxygen is reduced, take place on the surface of the reinforcing bar and form a corrosion cell. In the cathodic reaction, oxygen is consumed on the surface of the steel bars; it has been reported that the rate of oxygen permeability is an influencing factor which greatly affects the corrosion of steel bars in concrete. In addition, the electrical resistivity of concrete cover is a significant factor contributing to the corrosion processes when macrocell formation occurs (Kawaai & Ujike, 2016; Otieno et al., 2016).

Pores modified by bleeding water may have a great influence on durability with respect to the ingress of harmful substances and corrosion processes owing to chloride attack or carbonation. Bleeding in a form of segregation is unavoidable in column specimens cast from a cast at height of 1.5 m, thus leading to the formation of the vulnerable zones around the horizontally- placed steel bars. The bleeding affects the integrity of the reinforced concrete owing to the larger gaps or voids formed at the steel and concrete interface. According to past investigation, the bleeding of fresh concrete qualitatively diminishes the durability of horizontal steel bars embedded in concrete structures (Mohammed et al., 2002; Baccay et al., 2004).

Reinforced concrete column specimens were cast using various types of aggregate, including crushed limestone, sandstone and pit sand obtained from regional resources. The presence or absence of CUS and FA replacement was employed as an experimental parameter. The study examined the resistance of horizontally placed steel bars to corrosion resulting from the ingress of chloride ions in column specimens cast with CUS and/or FA replacements, in which the bleeding rate was varied. In particular, a detailed investigation was conducted on the variation in chloride ion concentration in terms of height and depth, corrosion current density, and oxygen permeability on the horizontal steel bars affected by segregation, especially with bleeding water in the column specimens.

This study aimed to investigate the effects of bleeding on the corrosion of horizontal steel bars placed in reinforced concrete column specimens cast with CUS and FA. This was examined through electro-chemical tests, including half-cell potential, polarization resistance and corrosion current density, conducted using specimens in which corrosion was induced via dry and wet (NaCl 10%) cycles. The results suggest that the corrosion of the horizontal steel bars in the upper part of the column concrete specimens was adversely affected by bleeding water, even for the OPC specimens with a relatively lower bleeding rate. This was attributed to less resistance against the ingress of corrosive substances including chloride ions, water and dissolved oxygen, especially in the upper part of the column concrete specimens. In the case of the FA mixtures, more uniform pore structure in the column specimens was formed, which led to higher corrosion resistance. This was subsequently improved through pozzolanic reactions, leading to a lower rate of oxygen permeability.