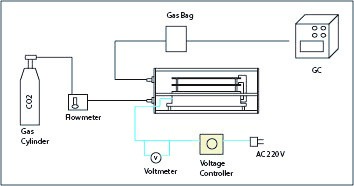 The use of fossil fuels is increasing. It is known that carbon dioxide (CO2) gas is the result of fossil fuel combustion, and CO2 is one of the main causes of global warming and climate change. In 2013, CO2 the emissions levels exceeded 400 ppm, which is the threshold of atmospheric CO2 content. If the burning of fossil fuels continues at the same level, the CO2 content in the atmosphere will continue to increase to the level of 1500 ppm. This increase in CO2 levels have been shown to have a very constant relationship with the burning of fossil fuels, and it can be calculated on the simple estimate that about 60% of fossil fuel emissions remain in the air (NASA, 2018). Significant efforts have been made to develop several technologies to overcome the role of CO2 in causing global warming by utilizing CO2 as a raw material to produce valuable fuels and chemicals, such as carbon monoxide (CO), dihydrogen (H2), and methanol (Mei et al., 2015). In a non-thermal plasma reactor, the decomposition of CO2 results in the formation of CO gas, which has some benefit as a raw material for methanol manufacture and as reducing agent in iron processing. Utilization of CO2 has a significant positive impact on producing a more valuable product, and it helps reduce the negative impact of carbon emissions on the environment. However, considerable energy and cost is required to decompose CO2 because the molecules have high stability (Mei et al., 2015). Decomposition of CO2 into CO is an endothermic reaction, as shown in Equation 1 (Mei et al., 2015):

Non-thermal plasma technology is one type of alternative technology that can be used to decompose CO2 into valuable fuels and chemicals. This technology operates at atmospheric pressure and room temperature so the non-equilibrium characteristics require relatively less energy than other methods. Several types of plasma reactors have been developed for CO2 conversion, such as dielectric barrier discharge (DBD), corona discharge (CD), glow discharge (GD), microwave discharge, radio frequency discharge, and gliding arc discharge (Mei et al., 2015). However, previous research using various types of reactors has focused more on plasma conversion of CO2 diluted with inert gases, such as helium and argon, which are unfavorable for industrial applications due to their high cost (Mei et al., 2015).

The decomposition of CO2 into CO and oxygen (O2) by non-thermal plasma reactors has attracted significant attention because it is almost impossible for a reaction to occur at low temperatures using a conventional catalysis (Ashford & Tu, 2016). As one of the greenhouse gas emissions, CO2 can be decomposed into CO and O2 in a three-pass-flow DBD reactor, a reactor designed so that the gas stream of the reaction has a special configuration. This configuration can simultaneously cool the high voltage electrode (HVE) during the reaction process and preheat the gas feed stream before entering the plasma zone (Winanti et al., 2013).

The work prefix of DBD is an electrical firing between two electrodes separated by a dielectric insulation barrier. Also called a silent discharge, DBD is known as an ozone-producing device. This process uses high-voltage electrical charges. DBD reactors can be made in various configurations. Generally, these reactors are made in planar form using parallel plates separated by a dielectric material (Masruroh et al., 2017; Istadi, 2006). Moreover, a DBD reactor can also be made in a cylindrical shape using a wire-shaped plate with a dielectric pipe between the two electrodes.

In plasma reactors, high-energy electrons collide with the gas molecules to produce excitation and ionization, and to form atoms and metastable compounds. If the electric field within the discharge zone is sufficient to break the chemical bond of the gas, it will show a large number of micro-discharges. Furthermore, the active atoms and metastable compounds will collide with the molecules resulting in a chemical reaction. The collision between the high-energy electrons and gas molecules results in excitation, dissociation, or ionization without causing the gas to heat, so the gas bulk temperature is always low and differs from the temperature of the electrons. Excitation of this gas creates a phenomenon that marks the formation of plasma, the emission of light in the visible light spectrum (Istadi, 2006).

Conversion of CO2 plasma is a complex and challenging process that involves a large number of physical and chemical reactions. The reaction performance, such as CO2 conversion and the energy efficiency of this process, is strictly controlled by various plasma process parameters, such as the discharge power, gas flow rate, gas residence time, and reactor configuration. This is often a major concern when exploring the relationship between the independent key input variables and output performance characteristics of plasma processes (Istadi, 2006).

DBD reactors have been developed for decomposition of CO2 at atmospheric pressure. The optimization methodology is based on three factors: discharge power, feed flow rate and discharge distance. The Box-Behnken three-level design has been developed to determine the effect of independent key process parameters (discharge power, feed flow rate, discharge length) and their interaction with the reaction performance in terms of CO2 conversion and plasma process energy efficiency. The results show that CO2 conversion increases with increasing discharge power and discharge length, but it decreases with increasing feedback. When viewed from the effects of these parameters, discharge power is the most important factor affecting CO2 conversion, while feed flow rate has the most significant impact on process energy efficiency (Mei et al., 2015).

In this present research study, a parallel plate DBD reactor was developed for the CO2 decomposition reaction. A parallel plate DBD reactor has parallel ceramic (silica) plates that serve as dielectric material using acrylic as a shell (jacket material) to ensure that the reaction between the gas and electrodes is optimal. This study also tested some parameters, such as discharge power and feed flow rate, to determine the optimal operating conditions.

This research was conducted thanks to a 2018 PITTA Grant (Hibah Publikasi Internasional Terindeks Tugas Akhir Mahasiswa Universitas Indonesia), which was organized by the Directorate of Research and Community Service (DRPM) - Universitas Indonesia. The authors state that there is no competing interest or conflict of financial interests.