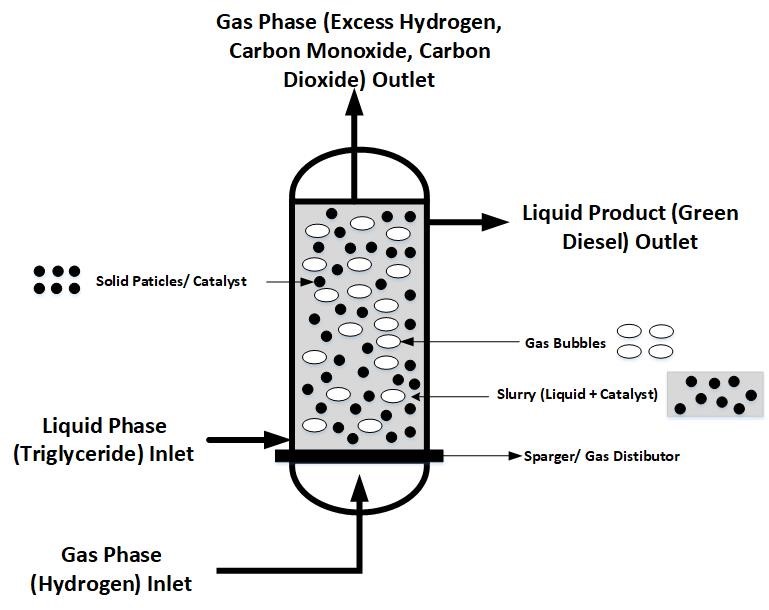 The purpose of this research is to obtain a mathematical model of the hydrotreating of vegetable oil in a slurry bubble column reactor to produce green diesel using an NiMo-P/Al2O3 catalyst. A steady state two-dimensional axisymmetric model of a slurry bubble column reactor of 2.68 m in diameter and 7.14 m in height was developed. The numerical simulation was performed using the model for the reactor operating at 34.5 bar and 598 K. Triglyceride of 5 wt% in dodecane enters the reactor with a very low velocity so that it resembles a batch operation. Hydrogen of 188 mol hydrogen/triglyceride enters the reactor with a velocity of 0.02 m/s. The simulation results show that the vegetable oil (triglyceride) conversion is 97.73%, the product yield is 83.34 wt% and the product purity is 77.23 wt%.

The depletion of global fossil fuels accompanied by the increase in energy demand and the attention to environmental damage due to the combustion of said fuels have motivated researchers to focus on renewable energy production and utilization. Hydrogen, liquefied petroleum gases, liquefied natural gas, biomass, biodiesel, and green diesel are some alternative energy sources that are being researched and considered as possible fossil fuel replacements (Elvan et al., 2013). Green diesel is one of the most promising alternative fuels and is expected to replace petroleum diesel fuel in the future due to its superior properties.

Green diesel is a second generation biofuel and is mainly produced from vegetable oils. It consists of straight-chain alkanes with 15-18 carbon atoms, the chemical structures of which are identical to those of petroleum diesel. The significant difference between green diesel and biodiesel is in their molecular structures. While biodiesel comprises alkyl ester molecules, green diesel consists of paraffin molecules, i.e., green diesel does not contain oxygen-based molecules. This characteristic of green diesel results in high heating value and high energy density (U.S. Department of Energy, 2007). Other properties of green diesel superior to biodiesel are a higher quality cetane component (CN > 80), lower NOx emissions, better oxidative stability, higher fulfilment of car manufacturer requirements, and higher applicability in all diesel vehicles (Kalnes et al., 2007).

Hydroprocessing or hydrotreating reaction is one of the alternative methods to produce green diesel. It is considered the most favorable method and has been applied in industries. Its mechanism includes hydrogenation, decarbonylation, decarboxylation, and hydrodeoxygenation. Hydrodeoxygenation eliminates oxygen by reacting triglycerides and free fatty acids with hydrogen to form water and n-paraffins. Decarboxylation or decarbonylation eliminates oxygen to form carbon dioxide or carbon monoxide and n-paraffins. The process involves three phases: vegetable oil (triglycerides) as the liquid phase, hydrogen as the gas phase, and a catalyst as the solid phase.

Modeling and simulation help experimental work on a particular process as they save time and cost. With modeling and simulation, one learns process behavior from which an optimal process can be designed. Although the advantages of modeling are remarkable, research on modeling of hydrotreating reactors is scarce. Research on the modeling of hydrotreating reactors has been performed by Attanatho (2012) using a microchannel reactor and Muharam et al. (2017a, 2017b) using a trickle-bed reactor.

The present study aims to obtain a mathematical model of the hydrotreating of vegetable oil to produce green diesel in a slurry bubble column reactor using an NiMo-P/Al2O3 catalyst and to understand the hydrotreatment behavior in the reactor.

The simulation results using the model developed in this research show that the performance of the slurry bubble column reactor producing green diesel via hydrotreating of vegetable oil is excellent. The TG conversion, the green diesel yield, and the green diesel purity are 97.73%, 83.34%, and 77.23%, respectively.

We express our gratitude to the University of Indonesia, which funded this research through the Hibah Publikasi Internasional Terindeks untuk Tugas Akhir Mahasiswa (PITTA) scheme under the contract No 2573/UN.2.R3.1/HKP.05.00/2018.

Muharam, Y., Nugraha, O.A., 2017a. Prediction of the Effects of the Inlet Velocity and the Reactor Length on the Performance of a Trickle-Bed Reactor for Renewable Diesel Production. Advanced Science Letters, Volume 23, pp. 5609–5614