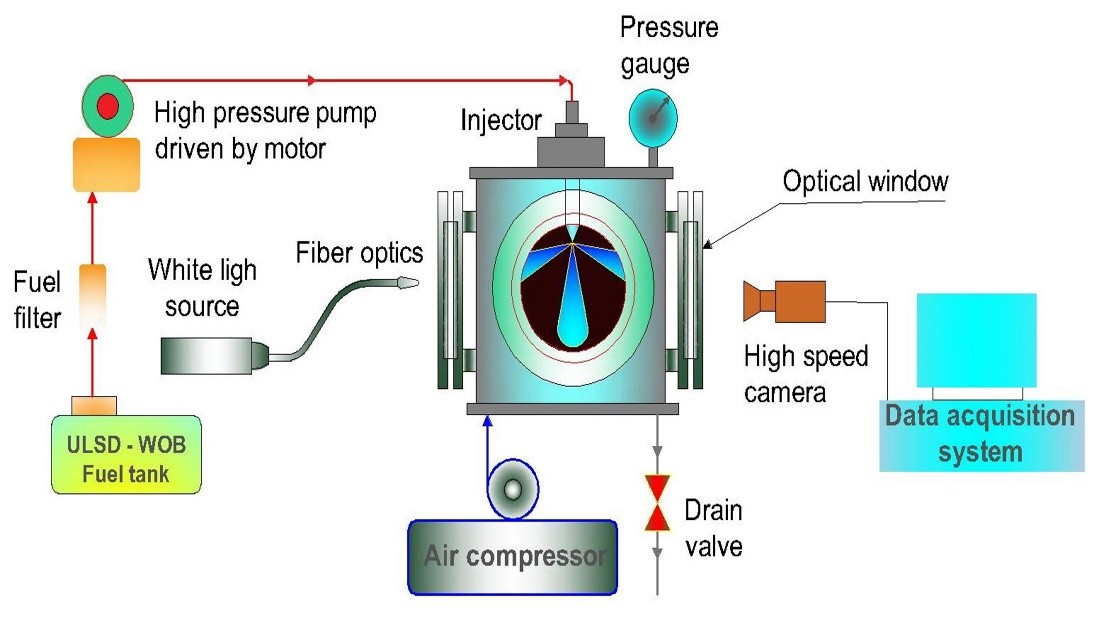 Using fuels with a no-sulphur or limited-sulphur content for diesel engines has been considered an urgent issue in the reduction of pollution due to the difficulty of controlling sulphur emissions. In this experimental study, ultra-low sulphur diesel (ULSD) originating from fossil fuel and biodiesel from waste cooking oil (WOB) were mixed with ultrasonic assistance. The optimal mixing rate of ULSD and WOB, and the optimal distance of the ultrasound horn tip, were found as 65%:35% and 80 mm, respectively. After 15 minutes of ultrasonic treatment, a ULSD-WOB emulsion was formed, with the highest stability at around 99%, and its physical properties attained constant values. In addition, the spray characteristics of the ULSD-WOB emulsion, the WOB and the ULSD, including the spray penetration and cone angle, were examined and compared to those of fossil diesel fuel (DF). As a result, the ULSD-WOB emulsion produced with the assistance of ultrasound met the strict requirements of fuels used for diesel engines.

Among transportation activities and sectors, the maritime industry continues to maintain its leading position due to its largest transport capacity. However, the emissions and various pollutant sources as a result of the use of fossil diesel fuel from ships and vessels engaged in maritime activities  are considered as the main causes of pollution in the air (Damanik et al., 2017; Silitonga et al., 2017; Hossain et al., 2019). One of the emissions which causes serious pollution is sulphur-originated (SOx), which is difficult to control and recover due to its chemical properties, as well as the high cost involved (Zhao et al., 2018; Hoang, 2018). Reductions in sulphur emissions should be compulsory for engineers, manufacturers and policy makers, and advanced technologies need to be applied to diesel engines used in transport sectors, with the aim of meeting the strict regulations related to emissions (Damanik et al., 2018; Hoang, 2019; Hoang et al., 2019).

Currently, several solutions, including injection management; improvements to fuel supply systems; the use of low-sulphur or bio-based fuels; exhaust gas recirculation; the installation of scrubbers on exhaust lines; and the utilization of absorbent for sulphur emissions, are being used to  reduce  the  pollution  emissions  from  the  diesel  engines  used  in the transportation sectors  (Hoang et al., 2019; Lin et al., 2010; Norhasyima et al., 2018).

However, while the use of low-sulphur fuels may be considered more suitable for existing diesel engines, ultra-low sulphur diesel fuel (ULSD) with a sulphur content lower than 0.0015% has been widely used for diesel engines in ships and vessels, especially ships being operated in SECA (Sulphur Emission Control Area) (Hoang & Pham, 2018). A disadvantage when ULSD is used for ships’ diesel engines is that it is necessary to mount a cooling system in the fuel supply line, with the purpose of increasing three-fold the physical properties of the ULSD, as it has a lower viscosity and density than DF. This leads to the high level of initial investigation capital of the above-mentioned cooling system (Mangus et al., 2015). In addition, use of biodiesels (BD) is being encouraged for use in diesel engines, with the aim of promoting "Green Shipping" because of  their advantages such as renewability, non-toxicity, and absence of sulphur biodegradation (Choi et al., 2016; Hwang et al., 2017; Hoang & Le, 2019a). However, they do also have some disadvantages, such as slightly high kinematic viscosity (KV) and density compared to DF (Silitonga et al., 2019). Due to the above-mentioned reasons, mixing two fuel types, such one with high viscosity (BD) and one with low viscosity (ULSD), may bring many benefits, including equal viscosity to DF; an increase in storage stability compared to BD (Kusumo et al., 2017); a decrease in cost due to the installation of the cooling system; and a reduction in the cloud point compared to BD (Milano et al., 2018 ). In particular, the increase in lubricity, the reduction of frictional losses and wear, and the reduction of injector nozzle erosion compared to ULSD were indicated by Keynejad et al. (2018). Therefore, mixing ULSD and BD can meet the standards of fuels used for marine diesel engines (Leong et al., 2016; Tang et al., 2018).

Regarding the mixing ULSD and BD, many advanced methods and techniques based on active or passive modes in order to increase its effectiveness in a microreactor, with the aim of producing a uniform mixture from two separate liquid phases, have been developed (Hessel et al., 2005). Among the active approaches, the use of the ultrasound technique is considered as an example which provides a non-contact method to create a new microstructure (Katou et al., 2005). Moreover, the application of this technique to the physicochemical synthesis process or microstructure devices for multiphase flow has shown significant advantages (Aljbour et al., 2009; Hübner et al., 2012) because the acoustic streaming, generated local hot spot, and jet formation are formed inthe medium cavities of the liquid-liquid phase, leading to the creation of bubbles by the cavitation mechanism (Rivas et al., 2012). The implosion of the cavitation-based bubbles occurs through shockwaves (Korkut et al., 2014). Therefore, two immiscible liquid-liquid phases are affected by ultrasound, resulting in them being broken down to create the emulsion (Wu et al., 2010; Mostafaei et al., 2016). Additionally, John et al. (2016) and Navickas et al. (2013) have used the ultrasound technique to produce an emulsion of water-diesel; their results show that the combustion characteristics of the emulsion of the water-diesel fuel was better than that of DF. In another study, Imazu & Kojima (2013) also reported the stability of the emulsion created by water-diesel fuel-vegetable oil based on an ultrasonic mechanism. Several other studies on the preparation of emulsions for biodiesel and low-viscosity fuels have been conducted using ultrasonic methods TY - JOUR
T1 - Physical Properties and Spray Characteristics of Ultrasound-assisted Emulsion based on Ultra Low Sulphur Diesel and Biodiesel
AU - Quoc Tien Le,Van Huong Dong
JO - International Journal of Technology
VL - 10
IS - 2
SP - 291
EP - 319
PY - 2019
DA - 2019/04/25
SN - 2087-2100
DO - https://doi.org/10.14716/ijtech.v10i2.2210
UR - https://ijtech.eng.ui.ac.id/article/view/2210