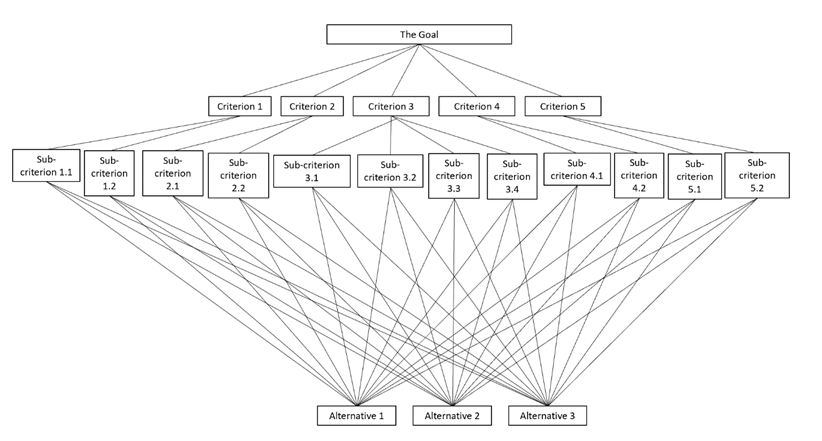 Relief logistics plays a critical role in the success of disaster relief operations. One way to improve the smoothness of such activities is the strategic placement of storage facilities to ensure that relief aid reaches disaster victims in a short space of time. This paper presents a decision-making model to determine the location of relief warehouses using the Analytic Hierarchy Process (AHP). We first identify a set of criteria to be considered in the model by reviewing the literature and conducting in-depth interviews (IDIs) with representatives from the Regional Agency for Disaster Management (BPBD) and The Indonesia Red Cross (PMI) in Jakarta. We then develop the AHP model with first-level criteria, namely costs, geographic location, infrastructure, proximity, and the macro-environment, and consider three alternative locations (Cipinang Besar Utara, Cipinang Besar Selatan, and Pondok Kelapa) for a relief warehouse to serve victims of floods in East Jakarta. The pairwise comparisons are conducted by five experts, and the results show that geographic location has the highest weight, while cost has the lowest, with Cipinang Besar Utara chosen as the preferred location.

Indonesia is very prone to disasters. According to the United Nations Office for Disaster Risk Reduction (UNISDR), with regard to disaster risk, Indonesia is ranked 67 among 191 countries in the world (UNISDR, 2017). In 2017 alone (up until August), the number of disasters in the country was 1601, events which caused the loss of 295 people, with 2.1 million displaced from their homes (BNPB, 2017a). Concerning the type of disaster, floods occurred 575 times in 2017 alone (BNPB, 2017a). In Jakarta (the capital city of Indonesia) in particular, floods occurred 98 times in the period 2011-2015 (BNPB, 2017b).

“a serious disruption of the functioning of a community or a society at any scale due to hazardous events interacting with conditions of exposure, vulnerability, and capacity, leading to one or more of the following: human, material, economic and environmental losses and impacts.”

Based on the above definition, one way to reduce disaster risk is to increase the capacity to manage disaster and improve resilience, which may include infrastructure, institutions, human knowledge and skills, and collective attributes such as social relationships, leadership, and management (UNISDR, 2009).

The logistics infrastructure plays a vital role in increasing the capacity that leads to improved resilience against disaster (Kusumastuti et al., 2014). Effective logistics management is one of the critical success factors in disaster management (Moe & Pathranakul, 2006). The objective of relief/emergency logistics is to transport appropriate emergency supplies promptly to those affected by disasters in order to minimize human suffering and death (Balcik et al., 2008). Relief logistics is an important issue, as it accounts for eight percent of the total relief or humanitarian operations (Van Wassenhove, 2006).

In the context of relief/humanitarian logistics, previous studies have proposed approaches to the selection of warehouse location for relief/humanitarian operations; for instance, studies by Turgut et al. (2011), Roh et al. (2013), Roh et al. (2015), Caunhye et al. (2016), and Maharjan and Hanaoka (2017). Turgut et al. (2011) used fuzzy-AHP to select a disaster logistics center in Istanbul, with the criteria (cost, transportation, infrastructure, geographic location and suitability of climate) and 11 sub-criteria obtained from disaster practitioners. Roh et al. (2013) investigated the criteria that had been used to select regional warehouse location in humanitarian relief operations by conducting a small-scale survey. They identified five criteria, namely location, logistics, national stability, cost and cooperation, and 25 sub-criteria. Roh et al. (2015), on the other hand, used a combination of AHP with fuzzy-TOPSIS to determine warehouse pre-positioning for a humanitarian relief organization. AHP was used to determine the criteria weights, while fuzzy-TOPSIS was used in evaluating the alternative locations. Besides the AHP-based approach, mathematical programming has also been used for warehouse location decision-making. Caunhye et al. (2016) proposed a two-stage location-routing model with recourse to integrated preparedness and response planning under uncertainty. In the first stage, the model set up warehouses and determined their emergency supply inventory level, while in the second stage the model planned trans-shipment quantities, delivery quantities, and vehicle routes for each scenario of uncertainty realization. Maharjan and Hanaoka (2017) used a modified version of the maximal-covering problem to determine the optimal number and location of warehouses to be situated in Nepal for the humanitarian relief chain, which would respond to sudden-onset disasters. Further emergency facility location selection using optimization models is discussed by Boonmee et al. (2017).

Several studies have discussed relief warehouse location selection in the context of Indonesia. Kusumastuti et al. (2013) proposed hierarchical models to determine temporary relief logistics facility locations during the disaster response stage, with a case study of the 2007 flood in the East Jakarta district. The first model was used to determine facility locations at the urban village level, while the second was used to select such locations at the district level. Both models were developed using mathematical programming. Handayani et al. (2015), on the other hand, developed a model to determine warehouse pre-positioning for the Mount Merapi eruption in Yogyakarta province. They used a combination of AHP and fuzzy-Topsis, whereby AHP was used to determine the weights of the criteria and sub-criteria, while fuzzy-Topsis was used to determine warehouse location. They identified seven criteria (location, national stability, cost, cooperation, access to logistics, safety and warehouse facilities), and 24 sub-criteria. Finally, Timperio et al. (2018) presented a decision model for warehouse pre-positioning (for emergency stockpiles) selection in West Sumatra province. They identified eight criteria (coverage, access to affected zones, risk, access to infrastructure, access to corridor, congestion, costs, and national development plan), and used fuzzy-AHP to select the location out of six alternatives.

Even though models for relief warehouse location decision-making have been developed, a different type of disaster and different conditions in the disaster area may require different decision-making models. Therefore, this research aims to develop such a model to determine the best location for a relief warehouse in East Jakarta district for pre-positioned relief materials, related to the frequent flood events in the area. East Jakarta district experienced a severe flood in 2014. According to the data from BPBD Jakarta, the number of affected residents in the district during this flood was around 89,000, with about 32,000 people evacuated from their homes. In the area of Kampung Melayu and Bidara Cina in particular, the water level reached 7 meters, because both areas are located on the Ciliwung riverbank (BNPB, 2014).

The model is developed using AHP, as this is very practical and allows multiple criteria to be taken into account in the decision making, and thus fits with the problem of determining warehouse location for relief supplies. Hence, this paper contributes to disaster preparedness in Indonesia, especially in East Jakarta, by providing a decision-making model for relief warehouse location, as well as insights into the decision criteria that are considered as important by representatives of the institutions that are usually involved in responding to floods in the area.

The remainder of the paper is structured as follows. The research methodology is presented in Section 2, which is followed by explanations of the results and discussion in Section 3, and the conclusion in Section 4.

Logistics infrastructure is one of the most important factors that determines the success of relief/humanitarian operations during and after disaster events. The paper has presented a decision-making model to determine the best location for a relief warehouse in East Jakarta district to respond to the floods that frequently occur in the area.

Based on the literature review and the results of the IDIs with the representatives from the institutions that are usually involved in disaster management in the area, we identified five criteria, namely costs, geographic location, infrastructure, proximity and macro-environment, and a total of twelve sub-criteria. Based on the IDI results and analysis of the secondary data, we also determined three alternative locations for the warehouse, in Cipinang Besar Utara, Cipinang Besar Selatan and Pondok Kelapa.

The results show that locating the warehouse in a disaster-free zone has the highest priority in the process and that the cost criterion is not considered to be an issue, as the objective of relief logistics is to minimize human suffering and loss. The results show that the site in Cipinang Besar Utara was selected as the preferred location for the relief warehouse, as it is close to the potential area affected by floods, it has more land availability, and it is considered to be safer than the other two sites.

The decision-making model developed in this research has limitations. First, the alternatives for relief warehouse location were solely determined by the experts. In cases when the number of alternatives is high, the decision-making model can be modified by adding a sub-model to select the best three or five from all the alternatives. Second, the experts in this research were from the local disaster agency and the Indonesian Red Cross. Adding experts from non-governmental organizations (NGOs) that are also actively involved in disaster management in Jakarta may help to refine the selection criteria and sub-criteria. Third, the decision-making model in this research was developed using AHP. The model can be modified by combining AHP with other approaches to improve the decision-making. Finally, the model is applicable to the preparedness stage of the disaster management cycle. It can thus be combined with the facility location model for the response stage of the cycle and the vehicle routing model, in order to become a complete decision support system for relief logistics to anticipate the frequent floods in Jakarta and to lower the response time.

Roh, S., Pettit, S., Harris, I., Beresford, A., 2015. The Pre-positioning of Warehouses at Regional and Local Levels for a Humanitarian Relief Organisation. International Journal of Production Economics, Volume 170, pp. 616–628