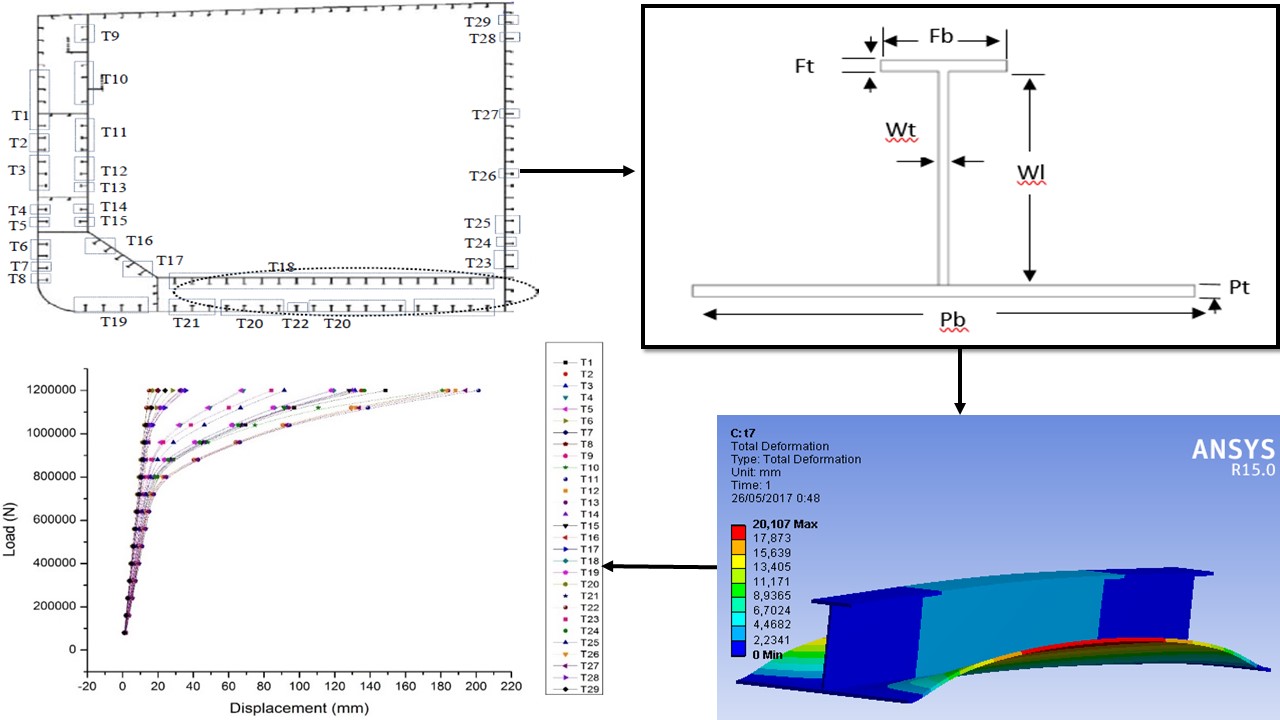 The midship section in oil tankers has become a major concern for the maximum bending moment during operational conditions. The section is assembled by a top deck structure, side structure, and bottom structure, which is usually supported by a stiffened panel, that is, a panel with an attached stiffener. This study elaborated on the conventional tee stiffener profile on the midship section of an oil tanker structure. Ultimate strength analysis was carried out using the finite element method for all the stiffeners with various geometrical dimensions according to the International Association of Classification Societies. This included the calculation of the section’s modulus and mass as related variables, using an analytical approach. The results showed that the ultimate strength, section modulus, and mass were influenced by the alteration of web length and plate thickness. For example, an increase of 10 mm in web length gave an additional value of 2.22% for the ultimate strength, 2.8% for the section modulus, and 0.61% for the mass. In contrast, 1 mm of additional plate thickness increased the ultimate strength by 48.57%, section modulus by 6.91%, and mass by 3.68%.

A ship consists of multidimensional structures because it must contend with static loading, in terms of cargo, and dynamic loading, such as waves working on the ship during the operational conditions on the ocean, which generate various types of loads (Hughes & Paik, 2010). Therefore, the structural performance of oil tankers is a major concern associated with the safety of the operations. Especially for the midship structure, which is supported by substructures like stiffened plates, the stiffener on a panel plays an important role in distributing the bending moment over the plate. There are various types of stiffener profiles in the midship sections of oil tankers, such as flat bar, angle bar, and tee bar stiffeners (Leheta et al., 2015). The different characteristics of loading working on the midship structure, for example, the top deck, side, and bottom, during operational conditions, mean that the stiffener profile has specific geometrical dimension variables. For example, on carriers like bulk carriers and oil tankers, a tee stiffener profile is present on the bottom structure, while a bulb stiffener profile is found on the side structure (Amlashi & Moan, 2008). Different geometrical dimensions on the top deck, side, and bottom structures for various types of stiffener profiles have been proposed to strengthen the midship structure.

In accordance with such circumstances, the structural performance of stiffener profiles is crucial in terms of the ultimate strength characteristics. Ultimate strength gives the best description of the load-displacement relationship, elaborating the endurance of the stiffener profile under a specific type of loading (Committee III.1., 2015). The loading can stem from a combination of cargo and various wave heights on the ocean; such conditions produce vertical bending moment, torsional load, axial compression, and lateral pressure. Accordingly, the vertical bending load, represented by sagging and hogging conditions, represents a major concern, because the specific circumstances of the stiffener give different characteristics of elastic–plastic deformation conditions. Therefore, an elaboration regarding the ultimate strength characteristics and their correlation with the geometrical dimensions, related section modulus, and mass has prospective value as a foundation for the geometrical development of stiffeners.

Related studies have been carried out in terms of various types of geometry on the stiffened panel; for example, researchers have compared calculations in experiments on the ultimate strength on wide stiffened panels (Xu & Soares, 2013b), as well as investigating the residual ultimate strength under compressive loads on the dented wide and narrow stiffened panels (Xu & Soares, 2013a; Xu & Soares, 2015). In addition, research on the ultimate strength under torsional loading under various dimensional conditions of box girders has also been conducted (Shi & Wang, 2012; Ao & Wang, 2016). Related to the implementation of the finite element method on the substructure, an investigation has been carried out on the nonlinear finite element method models for ultimate strength analysis of stiffened-plate structures under combined biaxial compression and lateral pressure actions—Part I: plate element, and Part II: Stiffened panels (Seo & Paik, 2009; Paik & Seo, 2009). Paik (2009) also examined the residual ultimate strength of plates with longitudinal cracks under axial compression in a nonlinear finite element method investigation. Another study was carried out by Do et al. (2013) on the ultimate limit state assessment of stiffened panel structures for extremely large ore carriers. The alternative hybrid structural panel was elaborated on by Fajrin et al. (2017) in terms of its structural behavior under a pure bending load. Finally, an analytical model is developed by Benbouras et al. (2017) under three-point bending for symmetric laminated beams.

Although several inline studies have been carried out, there are still prospective potential studies on the effect of the dimensional variables of the stiffener profile on structural performance in terms of ultimate strength under various types of loading. For instance, the maximum load carried by various types of stiffener profiles that can be withstood can be investigated using the finite element method. In addition, the research can be advanced considering the comparison of the structural performance effectiveness of a novel Y stiffener profile with the conventional one. It has been found that an additional close section in terms of that on the Y stiffener profile has merits for the torsional rigidity and strength-to-weight ratio; that is, the section modulus of the Y stiffener profile on the plate is larger compared with an as-built stiffened panel with the conventional tee profile, and the mass is reduced for the Y stiffener profile compared with the tee stiffener profile. This condition reduces the number of stiffeners by increasing the stiffener spacing. Therefore, in the present work, several stiffeners with various types of geometrical dimensions in the midship section structure of an oil tanker are analyzed using licensed ANSYS finite element software to give a clear description of the ultimate strength under a vertical bending load and related variables, for example, the section modulus and mass.

The aim of this study was elucidating the influence of geometrical dimension characteristics of tee stiffeners’ profiles on the ultimate strength under operational conditions using numerical and analytical approaches. This represents the global load working on the ship structure, that is, the sagging and hogging conditions, whereas the maximum wave–induced bending moment is evident on the midship section of the ship. Accordingly, a series of finite element method computations was carried out on stiffeners for various specific circumstances, and the variables were geometrical dimensions of the tee stiffeners, the section modulus, mass, and ultimate strength. The results of the study will be used as a foundation for further advanced research on the comparison of the structural performance effectiveness between the conventional tee profile and novel Y stiffener profile, which has merits in terms of its promising strength-to-weight ratio.