Title: Challenges of a 100% Renewable Energy Supply in the Java-Bali Grid
Matthias Guenther 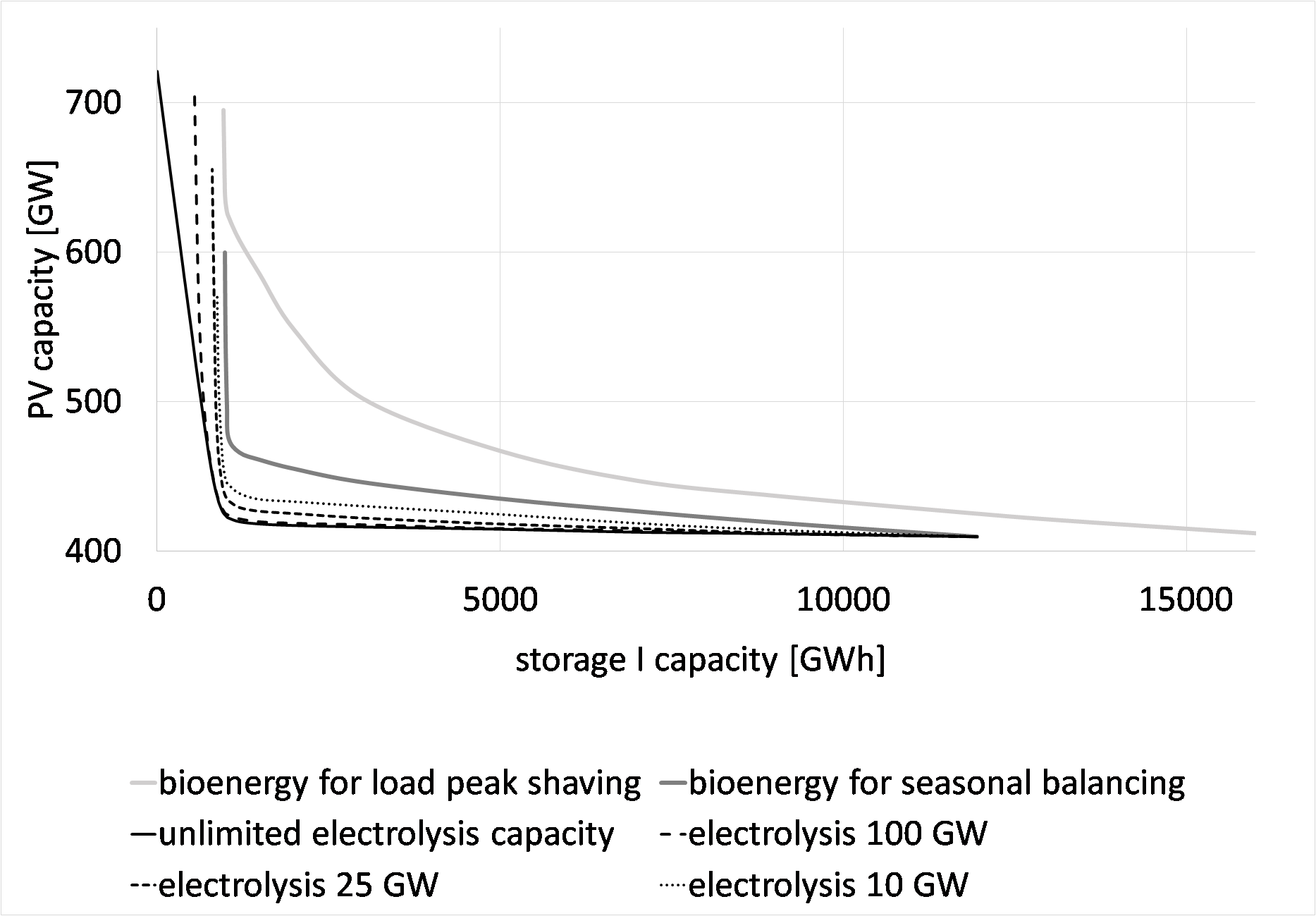 Renewable energy resources are increasingly being used to cover the demand in the electricity grids in many countries. A question that is currently for most grids rather theoretical, although interesting in introducing a long-term perspective, pertains to what an energy supply from exclusively renewable energy resources could look like. This question has to be answered individually for each grid. The objective of the present paper is to scrutinize the specific challenges that a 100% renewable energy scenario brings for the Java-Bali grid. This objective is achieved by designing power generation time series such that they match a given load time series. An important challenge for a 100% renewable energy supply is the very high dependency on solar energy, which generates an enormous primary power generation fluctuation on both a daily and an annual timescale. In particular the seasonal fluctuations come along with high storage demand, which is the greatest challenge involved in a 100% renewable energy supply. There are strategies that may be used to considerably reduce the storage demand: the installed photovoltaic (PV) capacity can be increased, bioenergy can be used for seasonal balancing, and special long-term storage can be added. These options are considered in the present paper.

The present paper presents a 100% renewable energy scenario (100% RE scenario) for the Java-Bali grid (JB grid) and discusses the main challenges of such a scenario. This involves simulating a future energy supply in which the electricity consumed in the JB grid is completely generated from renewable resources, and scrutinizing the most critical issues.

A 100% RE scenario for the JB grid is highly counterfactual given that the real share of electricity from renewable resources in this grid is below 10% at present. However, a scenario obviously does not have the task of representing the real state of affairs. The scenario refers to the year 2050. This does not mean that we assume that an exclusively renewable energy supply would be realized in that year. A scenario is neither a prediction. Nor is a scenario a development plan. In fact, Indonesia has set the targets of delivering 23% of the needed end energy (over all sectors) from renewable sources by the year 2025, and 25% of the electric energy (Irena, 2017). Instead, a scenario has the objective of scrutinizing the consequences, benefits, and challenges of taking a specific development path, without necessarily making statements about the probability or improbability that the respective development path will be chosen. The designing of scenarios is a  useful strategy for decision makers who need to conceptualize the implications of their decisions.

The JB grid represents a particularly difficult case for a 100% RE scenario. Not only is it by far the largest grid in Indonesia, supplying 76% of the national electricity consumption, but it also covers a very densely populated area, with nearly 1000 people per square kilometer. The latter is a particular problem for a renewable resource-based system, given that the usage of some of these resources requires the occupancy of quite large areas. This holds true especially for the usage of solar energy, which is the main resource used in the present scenario; large areas would be covered with photovoltaic (PV) modules. A challenge related to the massive usage of PV electricity is the demand for large storage capacities. We consider this to be the central challenge of a 100% RE scenario for the JB grid and concentrate on the storage issue in the present paper.

The modeling of a possible future supply from renewable sources alone has been carried out for many energy supply systems in the world (Umweltbundesamt, 2010; Henning & Palzer, 2012; Hinrich-Rahlwes, 2013). Such scenarios encourage a long-term perspective, suggesting how grid structures, from a present point of view, could or should develop in the future. However, such a scenario for the JB grid has not been discussed before. We do not know of any comparable projects and so consider the tackling of this topic as our original contribution. Scenarios like those discussed in this paper are an important tool for policy makers who must scrutinize the consequences of promoting one development path or another.
Experimental Methods

The calculations are carried out on the basis of time series. A complete year is modeled with load and generation time series in an hourly resolution. The load time series is given for the year 2050 and it is based on the real load curve of the JB grid in the past and on a consumption model for the next decades. The generation modeling is undertaken in accordance with the load curve. The decisive boundary condition is that the electricity generation covers the load at any time.

Each generation type contributes to the coverage according to its proper logic. For instance, solar electricity is generated whenever solar radiation is provided. Solar electricity generation is modeled on the basis of meteorological data for the grid area, which in the present study are acquired from the commercial data supplier Meteonorm (www.meteonorm.com). Seventeen locations all over the grid area are selected on which the PV power plants are placed. Unlike PV power, hydropower and bioenergy are more flexible in their generation profile and hence follow another logic. Geothermal power plants, finally, are operated as base-load power plants. The general generation logic in the power supply system is hence as follows: Geothermal power reduces the given load through a constant power contribution that is determined by the installed geothermal power plant capacity (assuming that the installed power plant capacity, rather than the geothermal heat flow, is the limiting factor in the power generation). Solar energy is used whenever solar radiation is provided. When solar power exceeds the remaining load (discounting the given geothermal power), it is stored or dumped (if storage capacities are insufficient). The available hydropower and biopower, limited by the given river runoff and the given amount of considered agricultural waste, are allocated on demand (within certain flexibility limits). Storage systems deliver the electricity when the primary generation of the relevant power plants does not meet the load.

The supply scenario provides only a lower bound estimation of the required capacities: First, transmission and distribution losses, which in a grid can amount to up to ten percent of the generated electricity, are not considered. Second, the supply model does not take into account meteorological variances, but is based on a specific meteorological model year. A real system must allow for meteorological variances. Third, in an analog way, the generation model does not take into account possible load pattern variances. Fourth, the whole modeling process is performed from a bird’s eye view, which does not reflect the perspective of a real system operator. In fact, a real system operator can only make more or less reliable assumptions about the future, based on a known past; he or she cannot know with certainty the load and generation conditions throughout a whole year. The adoption of the bird’s eye view may be less critical for load modeling because the system is extensive, with a large number of consumers, which makes the load more easily predictable; however, it is more problematic for supply modeling due to a given uncertainty concerning weather conditions. This uncertainty influences the allocation of the available energy resources under real operation conditions, and it increases the demand for safety margins.

From the present point of view, a transformation of the electricity supply system on Java and Bali into a renewable energy-based one would come along with a massive use of PV power plants. Such a large PV capacity alone would pose a considerable challenge because the available roof area is small compared to the at least 2500 km2 module area required, while the land use for solar power generation should be kept as small as possible. In view of this difficulty, it is recommended that offshore PV should be considered as an option. There are only very few PV offshore systems in the world at present, and none in the open sea. However, the densely populated islands of Java and Bali are locations that may be better suited to offshore systems than almost anywhere else on Earth. Research and development programs concerning offshore PV should, therefore, be put on the Indonesian research policy agenda. Many appropriate locations can be identified, especially on the northern shore of the islands, where the sea is quiet.

The biggest challenge, however, pertains to the need for large storage capacities due to the high dependence on PV. Efforts should be made, therefore, to reduce the enormous dependency on solar energy. This can be achieved by, for instance, paying special attention to the promotion of hydropower and geothermal power. Ocean energy should also be considered. This was not taken into account in the scenario design of the present study because the economic perspective of ocean energy technologies is not yet clear. However, from a long-term perspective, it is recommended that Indonesia should participate in research and development activities focusing on ocean energy. The usage of ocean energy has the potential to contribute considerably in mitigating the problem of solar power fluctuations (Ernst & Young et Associés, 2016). Whether this potential can be tapped depends on its cost development (Magagna & Uihlein, 2015). Furthermore, the energetic usage of waste should be promoted. Adding municipal waste to the considered agricultural waste can increase the energy yield from waste, which, as argued above, can effectively reduce the need for storage systems.

As the storage capacity is essentially determined by the task of seasonal balancing, a long-term storage can relieve the pumped storages and batteries of this task. With the current cost structures, long-term storages, e.g. in the form of gas (methane) storages, should be considered. If the battery cost reductions that are predicted by some battery producers are achieved, special long-term storages may be dispensable. However, this must be confirmed in a further study.

Furthermore, it is worth noting that a grid extension to other islands could alleviate the challenges to a certain degree. A grid extension facilitates the integration of additional power plants into the grid, increases the capability of balancing generation fluctuations due to the weather variability, and can reduce the day-night contrast of solar electricity generation (if the grid extension broadens the geographical longitude range of the grid area). In this respect, the planned extension of the JB grid to Sumatra is a useful step, from a long-term perspective, to facilitate a large renewable energy share in the grid (HVDC Sumatra Java, 2016).

The JB grid presents particular challenges to a 100% RE scenario because the consumption in the grid is high, the islands are densely populated, and the dependency on the highly fluctuating solar power is significant. However, from a long-term perspective, the electricity supply system will approach a state in which it is based primarily on renewable resources, and the identified challenges will have to be overcome in one way or another. Some recommendations that suggest themselves, from the current perspective, have been outlined. These recommendations may have to be revised in the future in accordance with new technological or economic developments.

I am grateful to Swiss-German University which supported this study with an internal research funding scheme. I would also like to thank PLN PT for making load data for the JB grid available as well as monthly river runoff data for the Citarum River in West Java. The latter data were useful in taking into account the seasonal variability of hydropower generation in the grid area.